UK release date: 2 May 2020
by Barry Creasy
published: 12 May 2020 in Classical and Opera Features
Tweet 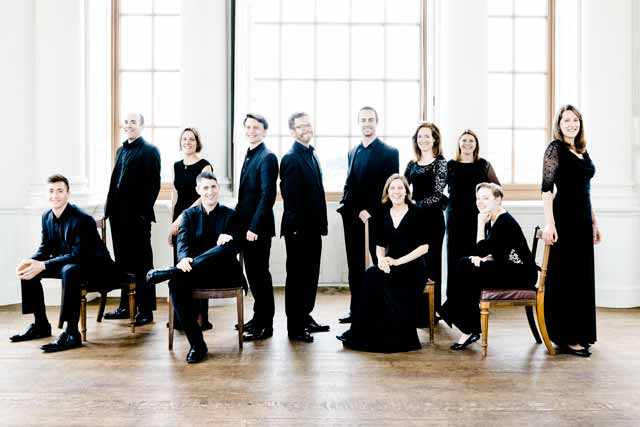 The coronavirus lockdown has resulted in an avalanche of ‘music I performed in my spare room’ uploads to YouTube; they range from ‘having a bit of fun’ through ‘overcoming the exigencies of a home acoustic and a click track with fortitude’ to some truly excellent material. It probably goes without saying that the choral group Stile Antico – who always perform without a conductor – fall into the latter category with their recording of Thomas Tallis’ 40-part motet Spem in Alium released on 2 May to mark 40 days of lockdown, which has now attracted over 26,000 views. I spoke with two of the group’s members, Kate Ashby (soprano) and Benedict Hymas (tenor and the recording’s sound engineer) about the project.

“We wanted to do something ambitious that we wouldn’t normally do,” says Kate, and, indeed, Spem certainly fits the bill. The history of the piece is cloudy, and the somewhat grovelling text (“I have never put my hope in any other but in Thee, God of Israel who canst show both wrath and graciousness, and who absolves all the sins of man in suffering…”) contrasts with the generally triumphant nature of the musical writing. Scored for eight five-part choirs (probably intended to sing in an octagonal arrangement) it is clearly an example of Tallis showing off his skill as a polyphonist, and it has lost none of its braggadocio quality in modern performances. Although, harmonically, the work is fairly simple, singers can easily get lost in its texture, and it carries the reputation of being a bit of a bragging rights piece: early music singers all want to tell you how many times they’ve ascended this particular peak. It sits oddly, then, with Stile Antico’s usual more unassuming style: the performance of smaller-scale Renaissance works with a studious and nuanced brilliance. Notwithstanding, of course, the fact that there are only twelve of them.

The exigencies of performing at home via online platforms, however, mean that live co-ordinated singing is well-nigh impossible, and the engineered combination of individual parts sung to a click track into a multi-track whole seems to be the order of the day. So, as whatever project they undertook would require the use of multi-tracking, the group decided to go for broke, with the 12 members of the group singing, between them, all 40 parts. Benedict, who pulled it all together (as well as supplying some of the tenor parts on the recording) tells me that the sound engineering wasn’t as complicated as the final, slick product makes it appear.

The group downloaded a free access score from the Choral Public Domain Library, and the source also yielded an audio file keyboard reduction which, when modified for tempo and dynamic, formed a ‘click track’. Given that each singer needed to record at least two parts (and some as many as five), there wasn’t a great deal of time for rehearsal, but Stile Antico’s usual conductor-less modus operandi stood them in good stead for delivering intuitive performances. Most of the group used the microphones on their tablets and phones to record the video and audio simultaneously, and Benedict spent a while editing for balance – both of individual voices within choirs, and choirs as a whole within the texture – and added a small amount of reverb to the final cut; this compensated just enough for the sometimes dead sound of home recordings, without being too boomy. “The sibilants,” he tells me, “were the messiest to sort out.” Choral directors everywhere will know the challenge well.

It’s the accompanying video, though, that appeals to those who know the piece. Set against a background of slowly moving clouds in a blue sky (shot by Benedict on a perfect day on the Sussex Downs the day before he compiled the video) we see each singer in the familiar square box of these lockdown performances. But here is where the subtle ornamentation begins. Like an extended, highbrow version of Celebrity Squares, the boxes are arranged in eight columns of five, each column setting out one of Tallis’ choirs. Singers and choirs appear and disappear along with their parts in the piece, so that, rather than the usual aural spatial effects that live performances aim for, we get what is, in effect, a graphic representation of the score. We see how Tallis gradually builds singers at the beginning of the piece, how he sets choirs echoing against each other throughout, and the final section of utterly glorious 40-part polyphony.

All of this makes for an outstanding performance of the work. In spite of the challenges, the recording manages still to showcase Stile Antico’s intuitive approach to Renaissance choral music; it abounds in subtle shifts in dynamic, tempo and attack that augment the brilliance of Tallis’ writing, and demonstrates not only how home recording can be brought to concert hall standard, but how the extra features of a video recording can embellish such a performance to create a multimedia experience.

So, what of the short and long-term future in a world where the science seems to suggest that choral singing, at least for now, is a risky activity? “We’re having an online meeting to discuss this,” says Kate. “There may possibly be a series of videos on how we put the piece together.” The group also has some ideas for more online performances – what Kate refers to as “the occasional classy project”.

Both Kate and Benedict agree that, although the situation at the moment is not rosy, the current crisis cannot be what stops singing altogether. Stile Antico (in common with many groups working in the performing arts) are using the opportunity to look seriously at their online presence, whether via YouTube or through Spotify – where they are considering curating playlists. Certainly, their YouTube channel has now gained a huge number of followers, and it would be foolish not to capitalise on this. A more diverse approach to presenting recorded music, though, needs to be taken, as, fairly soon “people will get fed up of seeing performers in little boxes”.