by Barry Creasy
published: 13 May 2021 in Classical and Opera Features
Tweet 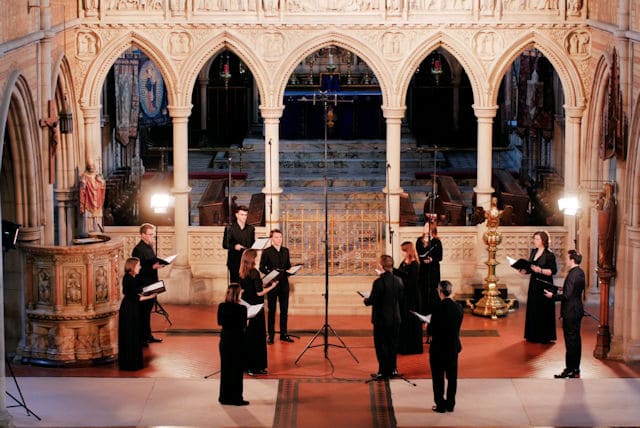 The exigencies of lockdown have hit the world of music hard; with no live attendance at concerts allowed, performers have had to find other ways of reaching their audiences, and several creative online/streamed solutions have emerged. The Early Music vocal ensemble Stile Antico have chosen to make the past year an occasion to take a more holistic look at the material they perform. Last autumn they released the first of their ‘Spotlights’ series, The Journey of the Mayflower – an exploration of the music associated with the 1620 voyage of the ‘Pilgrim Fathers’ to the New World.

Over the past few weeks, they have released three more in the series (with a fourth to be released on Sunday 16 May), focusing this time on specific works: Robert Ramsey’s How are the mighty fallen (written for the death of Henry Prince of Wales, James VI and I’s oldest son), Alonso Lobo’s Versa est in luctum (written for one of the many exequies of Philip II of Spain), John Taverner’s Ave Dei patris filia (composed for Cardinal College, Oxford) and Giovanni da Palestrina’s Surge propera amica mea (from Palestrina’s early years in Rome).

Released on Vimeo, these are cleverly crafted 45 minute videos that explore the background to each piece in terms of history, geography, politics and Zeitgeist, as well as examining their compositional features and placing them in the musical contexts of their time. The style is that of a BBC4 documentary, and, although, clearly, lavish location shots are not possible, some good use of archive pictorial material leavens the visuals, which are conversations held in appropriate settings (St Mary Abchurch, Christ Church Cathedral) between members of the group and invited historians and musicologists, who include Dr Clare Jackson (Cambridge University), Dr Owen Rees (Oxford University) and Dr Stephen Darlington (former Director of Music at Christ Church).

“…with no live attendance at concerts allowed, performers have had to find other ways of reaching their audiences…”

And, of course, there is the music. Each episode concludes with a full performance of the piece under discussion, recorded especially for this series, but there are some lovely bonuses, as the discussions on musical context also allow for some extracts, many of which were also specially recorded. So, for the Ramsey episode, we hear parts of works by Thomas Tomkins, Orlando Gibbons, Thomas Weelkes, John Ward, and Ramsey himself. In the Lobo episode, Philip II’s Habsburg heritage and his membership of the Order of the Golden Fleece are explored through the music of Heinrich Isaac, Thomas Crecquillon, Cristóbal de Morales, Tomás de Victoria and Jean Richafort. Several of John Taverner’s other works are used as examples in the episode featuring his Ave Dei patris filia, but it’s the work itself that occupies a large slot: around 15 minutes of complex polyphony, it presents a splendid opportunity for fans of music of the period to hear a first-rate account of this rarely performed work.

As always, Stile Antico deliver some excellent performances, with a sensitivity to the style and background of the material that one comes to expect from them. Indeed, these films give the listener an insight into the kinds of discussions that may well feature in the preparation of concert material by this group, who are well-known for their conductor-less, collaborative style.

The four episodes are all available to buy via subscription on Vimeo, here.