THE RING AND I 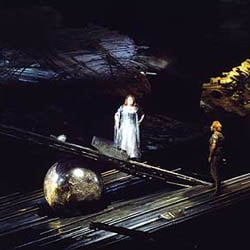 One of the first opera visits I ever made was to see Reginald Goodall’s Ring at English National Opera in the mid seventies.

It was a pretty good place to start and it set the standard for productions of Wagner’s epic for the following three decades.

With the Royal Opera about to embark on three full cycles, the first in over 10 years, I thought it was time for a personal look back on what London has been given between then and now.

As an 18 year old who, until then, had had to sit in his bedroom listening to records of the work, seeing Glen Byam Shaw and John Blatchleys production at the Coliseum in 1975 was thrilling. Even then, I think there was a sense that this was a monumental production, both visually and musically, under the baton of one of the most revered post-war Wagnerian conductors.

The phrase used at the time to describe it was “space age”, an indication that it was a slightly adventurous staging, not quite “as Wagner had intended”. Of course, by today’s standards, it was pretty straightforward, a bit updated but no clowns, Michelin men or camp cowboys in sight. I was a little disappointed with some of the “effects” the dragon was a bit lame, the Rhine was represented by coloured lights shining on the metallic strips of the set and the finale of Twilight of the Gods saw Rita Hunter standing solidly out front with a film of a running white horse projected behind her. Not quite what my imagination had conjured up.

But with Norman Bailey as Wotan, Rita Hunter as Brnnhilde and a sweet-toned Siegfried in Alberto Remedios, a heldentenor such as the world does not possess today, this was an overwhelming experience. Of course, your first time is always special (one way or another) but, sadly, the following 30 years hasn’t risen to the challenge this production set to producers, singers and conductors.

I still have a leaflet from that first Ring visit and it tells me that top price tickets were 7.50 (4.20 for non-Wagner operas). The cheapest seats were 90p but I really pushed the boat out and sat in the Upper Circle for 2.30 for each opera. In the programme, there is an advert for a four record set of the production’s Rhinegold which cost 8.95. What does that differential tell us about changes in funding and attitudes to accessibility to the Arts in this country?

Within a few years, and after a couple of returns to the Coliseum to see different out-of-sequence instalments of the Ring, I had also seen Gtz Friedrich’s Covent Garden production. Initiated in conjunction with Colin Davis in 1973, it had been around a few years by the time I caught up with it. I found the staging a bit sparse, a revolving hydraulic platform standing out in my memory. With a cast that included Gwyneth Jones and Donald McIntyre, it had high musical values though. I remember being astonished by the number of supernumaries needed to operate the gigantic dragon, the top of whose head opened for Fafner to pop out in his dying moments.

By the early eighties, London-bound operagoers who couldn’t jet off to Bayreuth or other world opera houses had the chance to experience another Ring, when the BBC broadcast the work for the first time. It was the Patrice Chereau/Pierre Boulez production from Bayreuth and it first went out in weekly one act instalments. I haven’t seen it since but I remember it as an eclectic and exciting staging and I hope to catch up with it again soon.

More than a decade went by before London saw a new production and for me it was much longer because I didn’t get to the Richard Jones/Bernard Haitink performances in the mid nineties. Jones has a way of stirring up feelings both positive and negative but, at his best, his work is riveting and I suspect I would have liked his approach to the work.

Suddenly 30 years had gone by since my first Ring

Suddenly 30 years had gone by since my first Ring and it had been many years since I had seen any of the four operas staged. The opportunity arose again in 2004, when ENO put on its first production since Goodall’s, which had come to an end in the mid eighties. I didn’t see Rhinegold but Phyllida Lloyd’s pole-dancing Rhinemaidens and London Underground-like Nibelungs (surely Alberich would have got a bit more out of his workforce!) caused a stir and divided opinion, as so many opera productions do these days.

To make up for it, I saw Valkyrie twice, enthused by my first live performances in so long. It was a pretty mixed bag. Siegmund crooned and seemed to me better suited to Les Miserables but Orla Boylan was a likeable Sieglinde. Robert Hayward’s Wotan came in for some stick but I quite liked him and Kathleen Broderick’s Brnnhilde was striking.

Some of the staging was just silly and incoherent but it did have a strong emotional effect on me. When Wotan injected Brnnhilde on her hospital trolley (not making this up), I groaned audibly but it did bring home the almost violent abuse this father subjects his daughter to. Having become the father to a little girl myself in recent years, I found the scene moving and impactful and I was won over, almost in spite of myself, by the time the magic fire entrapped the girl. The last act of Valkyrie was memorably played at Glastonbury, where the crowd received it far more gracefully and enthusiastically than this year’s Proms audience did Michael Ball.

Off the Richter scale of daftness

Siegfried got a bit sillier the hero and Mime living in a seedy bedsit, the dragon unaccountably portrayed as a small man in the bath but I was impressed with Richard Berkeley-Steele and also with Sarah Tynan’s Woodbird, played as a boy on a scooter, and overall found it an enjoyable romp. Twilight of the Gods went off the Richter scale of daftness with a skate-boarding Journey down the Rhine and a second act wedding that made Jerry Springer the Opera look positively refined. Unlike some sitting around me, I did return for the final act and was glad I did, as Lloyd managed to pull back some dignity from this perilous situation. I didn’t mind Brnnhilde’s suicide bomber finale although I wonder how it would have played a few months later, post-7/7? I hope they would have had the courage of their convictions and stuck with it, but I doubt it.

ENO’s Ring overlapped with the Royal Opera’s latest offering, which began its journey at the end of 2004. Also, interspersed into this timeline was the Proms four year cycle beginning with a Rheingold conducted by Simon Rattle also in 2004. I did the prom thing for this, standing close to the front within range of Willard White’s spit. Many were impressed by Rattle’s original instrument approach but I found, after standing with no support for nearly three hours, that this was still my least favourite evening from the cycle.

I have to confess to not liking Keith Warner’s Covent Garden Ring at all. Rheingold was horribly cluttered with some inane imagery and inept stagecraft. Philip Langridge as Loge raising an umbrella during Donner’s “He da! He da! He do!” raised a cheap and inappropriate laugh and was particularly ill-timed and misjudged. We were seeing Bryn Terfel’s Wotan for the first time and at this showing it was promising. The promise came to fruition in Die Wlkure, when he gave a terrific performance and the staging was much cleaner and rose to the level of adequate. I was to see this three times, including the 2005 Prom (my fifth Walkre in just over a year). The highlight of this, and the second run that year in the opera house, was seeing Domingo and Meier as Siegmund and Sieglinde. Pure magic!

Siegfried pretty much knocked Warner’s production on the head for me, at least in its first incarnation. There was virtually nothing about it I liked the two JTs (Johns Tomlinson and Treleaven) playing Wotan and Siegfried as seedy old men (was that actually intentional?), the ludicrous stag on wheels and, despite Lisa Gasteen’s strong Brnnhilde, a horribly weak final scene. If Phyllida Lloyd had fudged Brnnhilde’s awakening by presenting it as a silhouette (what a cop-out), Warner made it ridiculous by having Siegfried running on and off stage throughout. I gave Gtterdmmerung a miss.

What does the future hold in store for London?

So, once Keith Warner’s Ring comes to a fiery end on 2 November, what does the future hold in store for London? At the RO’s press conference to launch the season back in April, Antonio Pappano said that the creative team had listened to the criticisms and were going to tidy up some of the clutter of the production. That was a very encouraging statement but, without pre-judging the improvements, I have to say they will have to be pretty substantial for me not to hope that this run will be the final one for this production.

Who knows what we’ll get next. If they could do something about the first two acts of Twilight, I’d quite like to see the ENO’s come back. Maybe by the time it does, it’ll be Katherine Broderick (rather than Kathleen) as Brnnhilde. Maybe the RO will shelve this current experiment and give us something that won’t make me feel more and more like an old fart harking back to the seventies (older readers who saw the likes of Nilsson, Windgassen and Hotter will no doubt be thinking “Pah! What does this youngster know?”). In the meantime, I find myself going back to the Reginald Goodall recordings (now on CD instead of vinyl) and wishing we could see another Ring to match it.