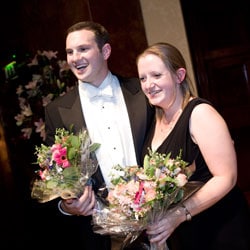 Clifford Curzon said that there is no greater or more touching pleasure than “giving a young and beautiful talent a little lift in the direction of the stars” and the Wigmore Hall / Kohn Foundation’s International Song Competition does just that, in the most supportive and collaborative way imaginable.

Some music lovers may think of competitions as belonging to opera – Tannhäuser und der Sängerkrieg auf Wartburg springs to mind, or maybe Walther’s impassioned ‘gilt es als Meister euch zu ersingen’ – he’ll go through the torture of a singing competition to become a Mastersinger, just to win her – or perhaps one thinks of Cardiff’s ‘Singer of the World’. The last has a sort of consolatory Song Prize, but for the real congoscenti, the echt Song competition is held every two years at the Wigmore Hall.

Oh dear – yes, I can see that I’ve used lots of so-called ‘elitist’ terms there! No apologies, however; the great joy of the Wigmore is that it is unashamedly elitist in the best sense, and this competition is a wonderful example of that. On Tuesday 6th you can spend all afternoon and evening hearing some of today’s most promising singers, for just £15 (£12 if you are eligible for concessions) and on Thursday 8th, you can attend the Final and Prizegiving, with seats from £12.

Of course the most entertaining aspect of these sorts of competitions is the disagreements – not just amongst the competitors or judges of course but amongst the critics and the audience. I dont think I’ve ever agreed entirely with the final decisions, but I’ve had a lot of fun – it’s worth remembering that when you come to this hall, you are joining what one very well known singer has called “dem besten, verstandigesten, snobistischen Publikum der Welt” – in other words, we take our Song seriously here.

So, what can we expect this time? First of all, young singers of definite promise: for example, the 2009 ‘runner up’, Benedict Nelson, appears in the opening show of ENO’s new season, on September 15th – he’s singing Belcore in L’Elisir, no less. The 2009 winner, Marcus Farnsworth, also has a growing list of notable credits to his name, including Wigmore and ENO appearances.

This year’s judges are as distinguished a bunch as you could choose – they include William Lyne, Thomas Quasthoff and Sarah Walker, before any of whom I would tremble to appear. So you can expect some spirited discussion, I’m sure, as well as deeply thoughtful advice.

The competition’s major remit in terms of repertoire is to honour the place of the Lied at the heart of the Song repertoire, and in particular the Shakespearean stature of Schubert in the genre. Theres more about all this on the Wigmore’s new online resource theartofsong

plus advice for singers on entering competitions, information for audiences on how judges arrive at their decisions, and some excellent interviews by Iain Burnside – Andrew Kennedy and Christopher Maltman are especially illuminating. Enjoy – see you on Thursday!