Wagner on Screen at the BFI 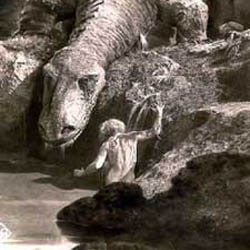 If, like Bryn Terfel, you won’t be spending great swathes of October at the Royal Opera House for The Ring, you might want to get a Wagner fix over the river at the venue formerly known as the National Film Theatre.

BFI Southbank, as it’s now called, is showing a season of films related to the great man from 1 to 17 October. The diverse programme includes some rarely-seen features from as far back as 1912, when Carl Froelich directed the first biopic of the composer.

Under the watchful eye of the Wagner heirs, Froelich took a fairly uncritical look at Wagner’s life and wife with the Italian composer Giuseppe Becce taking the central role. Apparently, he also provided the music, as they were not allowed to use the real scores (extraordinary!) and presumably this was originally played by a live orchestra.

Let’s face it, apart from an ill-timed umbrella gag in Keith Warner’s production of Das Rheingold, there are not a lot of laughs in The Ring but, for light relief, the BFI are showing What’s Opera, Doc?, to accompany the Froelich silent. Starring Bugs Bunny and Elmer Fudd, it contains immortal lyrics like Kill the wabbit set to Wagner’s music.

Maybe an obvious choice for the line-up is Tony Palmer’s laborious 1983 biography of Wagner, with a cast list rather like that of an upmarket 1970s disaster movie, that is Richard Burton, Laurence Olivier, John Gielgud, Ralph Richardson, Vanessa Redgrave, William Walton no less and a whole bunch of opera singers playing their 19th Century equivalents, including Gwyneth Jones, Peter Hofman, Yvonne Kenny, Jess Thomas and Heinz Zednik. At nine hours, it’s a bit like watching Gtterdmmerung twice back to back but, arguably, not as enjoyable.

Syberberg also has a go at Ludwig II, Wagner’s famously decadent patron, as does Visconti in movies both filmed in the early seventies. Parsifal comes in for multiple treatments too, with Syberberg (again) directing a production using beautiful actors miming and Tony Palmer (also again) exploring the opera with Plcido Domingo in the more recent documentary Parsifal: the search for the Holy Grail.

I could say there’s something for everyone here but you probably have to like Wagner and/or silent German movies, which narrows the field a bit. If you are in the market and not suffering from Wagner overload this autumn, you might want to pop along to the South Bank to check out these goodies. You might even find yourself sitting next to Bryn who, unless Fricka’s put her foot down and he’s on babysitting duty, has plenty of time on his hands at the moment.