Live opera with an audience is possible. Keith McDonnell travelled to Munich to see for himself 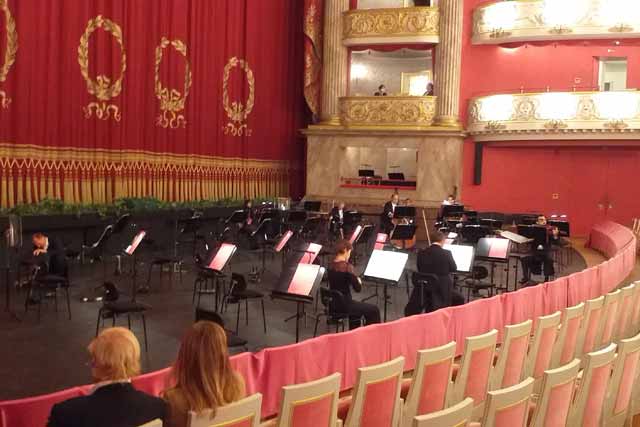 Our so-called Culture Secretary, Oliver Dowden, seems more concerned about wading into a manufactured culture war over ‘Rule Britannia’ at the Proms rather than working out how to get thousands of singers, musicians, and back-stage crew back into work, and our opera houses and theatres open once again. Given we’re saddled with the most incompetent government in living memory, unfortunately we need to look elsewhere to see how it can be done.

When the ever-resourceful Bavarian State Opera in Munich announced a revised autumn schedule which would be COVID-friendly (for want of a better expression), we booked our flights in order to experience our first live opera in seven months. Here are the reviews of Die Zauberflöte and 7 Deaths of Maria Callas for you to digest – neither without flaws, but my God, under Nikolaus Bachler’s inspired leadership, singers, musicians and stage crew were back where they belonged – in the opera house, making music.

The most notable physical difference to the layout of the opera house is that there’s no longer an orchestra pit – a temporary solution to the complex issue of social distancing for the players. The first five rows of stall seats have been removed, with the orchestra now level with the audience. From our seat on the third row for Die Zauberflöte there were issues with balance. Basically eyeballing the concert master, by the close we felt as though we knew the first violin part by heart. This is more an observation than a criticism – sitting further back (row 16) for 7 Deaths of Maria Callas, balance and orchestral textures were nigh on perfect.

But how has the Bavarian State Opera managed to get live opera back on stage, with an audience present, albeit limited to a maximum of 500 spectators?

We asked Christoph Koch, the company’s Head of Press and Editorial Content, to explain…

The singers and actors in Die Zauberflöte didn’t socially distance on stage – they performed as normal. What procedures are in place to enable them to do this?

The Staatsoper’s 1000 staff members are divided into groups and colours. The red group is made up of performers, orchestra members, and the leading team etc., who are tested for COVID-19 every week at the moment. By doing this we can perform the productions in their regular version without socially distancing the singers. However the exception to this is the chorus, which is why we’re trying not to stage operas with big choral scenes at the moment. The yellow group of staff members is the group that occasionally comes into contact with the red group, and this group is tested regularly, but not weekly. This is a similar arrangement to the one introduced at the Salzburg festival this summer, which enabled it to go ahead.

How do the backstage crew, scene changers, lighting engineers work? Do they socially distance?

Yes. They are socially distanced and have to wear a mask for those occasions when they’re unable to keep a distance. The makeup artists, for example, are required to wear an FFP 2 mask and a visor.

How will the lack of an orchestra pit affect the choices in repertoire this season?

We had to adjust the September schedule, removing Elektra and Die Frau ohne Schatten, and replacing them with two Mozart operas – Die Zauberflöte and Cosí fan tutte. As we speak, the October schedule stays as planned, with performances of L’elisir d’amore, Le nozze di Figaro, Tosca and Madama Butterfly. But, of course, the big Wagner operas are not an option at the moment. For some operas, we’re going to use reduced orchestral versions – for example Wozzeck is revived in mid-October and we’ll be performing Berg’s masterpiece in Eberhard Kloke’s already existing reduced version. Our next new production this season will be Braunfel’s Die Vögel (The Birds). Rehearsals start soon, as we allocate six weeks to new productions – our revivals have the customary ten-day rehearsal period. Not having a pit, of course, allows social distancing between the players. In accordance with regulations, there’s 1.5 metres between the strings, and two metres between the brass, and everyone is tested on a regular basis.

How are operas begin adapted to being performed without intervals, in order to minimise interaction between spectators?

Some cuts will be necessary, in order to reduce the running time. Our revival of Die Zauberflöte cuts Sarastro’s aria ‘O Isis und Osiris’ and the male chorus at the opening of the second act in order to reduce the running time to approximately two and a half hours. We also can’t have large choral numbers, so this was the most obvious section to cut.

So, there we have it. If the Bavarian State Opera can do it, why can’t The Royal Opera, ENO, WNO, Opera North or Scottish Opera? We hasten to add, this is in no way a criticism of any of these organisations, which have left no stone unturned trying to bring live opera back to the UK, but one levelled at an inept government that gives the impression of not even wanting to try to see how a Bavarian-style model could be implemented in the UK. However, flights are relatively cheap to Munich at the moment, and given Germany is on the UK’s ‘safe’ travel list of countries, our advice would be to jump on a plane and marvel for yourselves at the BSO’s determination and commitment to keep opera alive.

With thanks to the Bayerische Staatsoper and Christoph Koch. More on the Bavarian State Opera can be found here.