Why I Love… Parsifal

by Keith McDonnell
published: 15 Apr 2020 in Classical and Opera Features, Why I Love
Tweet

In our continuing series on personal operatic passions, Keith McDonnell guides us to the very best of Wagner 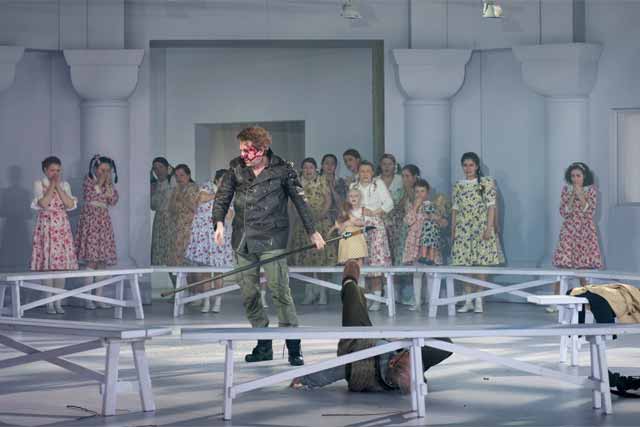 I feel I have to start this article with a confession – I’m a Parsifal addict. I became hooked as a teenager, listening to the renowned Herbert von Karajan recording. And since then its heady, some might say queasy mix of quasi-religious symbolism, the Grail legend, and redemption (a theme that runs through all Wagner’s operas) has kept me hooked. It helps that Wagner penned some of the most glorious music ever written for his last opera, which of course was too lowly a term for the contentious German composer, christening it a ‘Bühnenweihfestspiel’, or ‘Festival Play to Consecrate a Stage’ instead – the stage being his purpose-built opera house in Bayreuth.

I was due to be seeing Parsifal in Munich this week, but as that’s not happening I thought I’d take a look at four performances currently available on DVD and Blu-ray, which offer first-rate casts and challenging, yet rewarding stagings. None of them is traditional, but each probes the subject matter unsparingly, often shining a light on some of the more unsavoury aspects of Wagner’s work, racial purity for example, that underpin the narrative.

Two originate from the same opera house, the Berlin Staatsoper, but are separated by 23 years, yet share the same conductor, Daniel Barenboim. The first, recorded in 1992, is a slick, high-tech affair from director Harry Kupfer and his regular collaborators; designers Hans Schavernoch (sets) and Christine Stromberg (costumes). Its cool, sci-fi aesthetic holds the audience emotionally at arm’s length, but allows for some breath-taking stage pictures. And as we’ve come to expect, his direction of the singers is superb. The outstanding Kundry of the day, Waltraud Meier, is here captured in her prime as is John Tomlinson as Gurnemanz. Falk Struckmann is a suitably tortured Amfortas while Poul Elming transforms from the ‘pure fool’ of the first act to Monsalvat’s saviour in the last with dramatic ease, and sings with thrilling ardour throughout. There can be no denying Barenboim elicits sensational playing from the Berlin Staatskapelle, but he often dawdles when the score is crying out for some forward propulsion.

Kent Nagano is at the opposite end of the conducting spectrum in the 2010 Baden-Baden incarnation of Nikolaus Lehnhoff’s much-travelled staging first seen at the English National Opera in 1999. Fleet, yet never rushed, for me his is the most satisfying conducting of the lot, and he’s rewarded by exemplary playing from the Deutsches Symphonie-Orchester Berlin that compares favourably to that of its starrier counterparts. Lehnhoff’s take on the work is fascinating. Describing the opera as “an endgame in the ruins”, aided and abetted by Raimund Bauer’s sets and Andrea Schmidt-Futterer’s costumes he places the action in a post-apocalyptic future. He knows how to get the best out of his singers, and the railway track stretching back into the darkness in the last act is a potent symbol of where one of the opera’s strands, racial purity, can lead.

His cast is as terrific as Kupfer’s, with Meier appearing once again in her signature role. While she may not sound as fresh as she did 18 years earlier, her interpretation has deepened, and the sparks fly in her second act confrontation with Christopher Ventris’ Parsifal. The British tenor may not have the heftiest Wagnerian voice, but he uses it musically and is unutterably moving in the last act. Thomas Hampson is an heroic Amfortas, while Matti Salminen is an authoritative, gloriously-voiced Gurnemanz. Tom Fox sounds rather dry as Klingsor, but that’s compensated by a melodious group of flower maidens.

The Metropolitan Opera’s contribution to Wagner’s bicentenary in 2013 was an audacious staging by French director Francois Girard, which ruffled the feathers of the company’s notoriously traditional, backward-looking audience. Stripped of its medieval trappings, and replaced with a timeless setting (Michael Levine), contemporary attire (Thibault Vancraenenbroeck), vivid lighting (David Finn) and video projections (Peter Flaherty) the focus rests on the characters – the main takeaway being how segregating society by gender has dire consequences. The cast is arguably the starriest of all four sets, with superstar German tenor, Jonas Kaufmann, in the title role singing and acting superbly throughout. He is matched by Katarina Dalayman’s febrile, impassioned Kundry and Rene Pape’s rock-solid, heroic-sounding Gurnemanz. Evgeny Nikitin is a suitably malevolent Klingsor, but Peter Mattei’s career-defining Amfortas steals the show. No other singer conveys the character’s pain more unflinchingly than he does – his impassioned singing at one with the character. Unforgettable, and almost too painful to watch. I realise I’m going out on a limb when it comes to conductor Daniele Gatti, but I find his interpretation ponderous and self-indulgent, although the Met Orchestra play like lions for him.

My final choice is also one of the most recent additions to the Parsifal library, coming full circle as we’re back at the Berlin Staatsoper, with Barenboim on the podium – this time with maverick Russian director and designer Dmitri Tcherniakov’s vision of the piece, which is the most compelling of them all. The Knights of the Grail are here a weird religious cult, transported to a subterranean setting, Klingsor is a Fritzl lookalike with the flower maidens, and girls, kitted out in floral dresses, while the redemption Wagner implies at the close is nowhere to be seen. Indeed the ending is a real shock, but no spoilers! Yet Tcherniakov directs with such surety, his additions – such as an appearance by Parsifal’s mother Herzeleide, never seem to be wilful. Some might throw their hands up in horror at depicting Parsifal as a backpacker, but he, like all the characters, is on a journey. The singing is superb, especially from Anja Kampe as Kundry, Meier’s natural successor in the role. She is fearless, takes risks, and has the advantage of being a soprano rather than a dramatic mezzo and is also an unflinching actor. Andreas Schager is a vital, full-voiced Parsifal, Tómas Tómasson a creepy Klingsor, and Wolfgang Koch a harrowing Amfortas. Rene Pape also appears as Gurnemanz here – superbly sung, but a very different character to the one from the Met. Barenboim conducting is stately, and the playing without fault.

So then – which is my favourite? That’s a difficult one. In an ideal world I’d combine elements of each, but as I can’t, the Tcherniakov/Barenboim version wins by a whisker over the Lehnhoff/Nagano, but my advice is to invest in both. You won’t be disappointed with either.