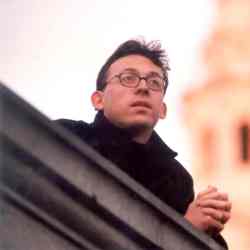 It’s been a busy year for composer Will Todd, his projects including an off-Broadway musical, an opera world premiere at Gateshead and another for Welsh National Opera, an important new recording of his Mass setting and a commission from The Sixteen for a piece that premiered in Salzburg in the spring.

But that didn’t stop him taking an hour out of his busy schedule to chat to musicOMH.com about his views on music and his attitudes towards composition.It’s never been easy to make a living as a composer, not least because it’s so hard to become famous and gain opportunities for writing, so I begin by asking why Todd became a composer.

It’s as if the question doesn’t need to be asked, though, because it’s clear from very early on that this is a man who was born with little other intent than writing music. “Well, er, I’ve always composed music,” he says. “I was a child who loved listening to the piano, it was always being played, and I literally can’t remember learning the notes on the piano because my sister taught them to me when I was very small.”

So he didn’t so much become a composer as he’s always been one? “Yes! My parents didn’t have a TV when I was growing up until I was 18 years old. There was nothing puritanical about it shortly before I was born their television broke down and they didn’t get it fixed for a few months. At the end of that time they realised it was much better they were reading books again and spending time with the kids and they decided not to get another one. So I spent lots of time improvising on the piano, and that’s where my composing began; it’s still where I go to when I start a new piece.”

Todd’s compositional styles are very diverse, but what stands out is his versatility in moving between genres. One of his earliest pieces, for instance, was an opera based on the life of Isambard Kingdom Brunel, whilst he’s just made his off-Broadway debut with a musical called The Screams of Kitty Genovese; there’s also his jazz-infused Mass in Blue, which was recently recorded to great acclaim by the Vasari Singers (the CD is on Signum Records). So, I ask, does this range of styles merely arise from the project at hand, or is he a man on a mission?

“That’s an interesting question I don’t think I set out on a mission, but I think I’m acquiring one. It’s true that the projects tend to dictate the musical style. I consider that the myriad of the musical genres around us are just stuff that you use like an artist would use paint. So using a jazz idiom or a chromatic idiom doesn’t make a particular statement. You have to do it well, and you shouldn’t use jazz textures if you don’t understand them, and Mass in Blue was commissioned as a jazz work specifically.

“When I say it’s become more of a mission, in the theatre pieces particularly I’m finding I want to move a lot more effortlessly between the genres. So there’ll be an operatic moment followed by something using a jazz harmony. I have no problem with that, and I think audiences are very adept about receiving it because we listen to all sorts of different kinds of music. I don’t think it’s going to endear me to diehard opera types, because it breaks the golden rules. But it’s their loss. The culture is so broad now and we have access to so much stuff that we didn’t have access to before that as a writer, you can expect people to have heard a bit of jazz, a bit of folk music, a bit of choral music, all incidentally in daily life or in a film. I think we should mix all these things together.”

One work in which Todd has done this is Whirlwind, a commission from Streetwise Opera which works with homeless people. The piece was performed from 24 to 26 October 2006, and, says the composer, “We had standing ovations every night and I was thrilled with it.” Two of the press reviews were particularly savage, which has evidently angered Todd, but he is adamant in its defence. “I think it’s the best thing that Ben [Dunwell, Todd’s long-term librettist collaborator] and I have done. It made my blood boil because they were unnecessarily harsh. It was very personal. Lots of reviewers are interesting and insightful and can tell you things, but you do have to remember that they are just one person and come with a particular set of musical tastes.”

“I don’t think I set out on a mission, but I think I’m acquiring one.”
– on mixing operatic and popular genres.

Born in Durham, Todd describes his hometown as ‘a wonderful, spiritual place with a lot of history. People seem to talk about their history and there are a lot of strands. There’s the religious history, the more recent Industrial history, and even the post-Industrial history. The landscape has literally changed in fifty years from being mines everywhere to mines nowhere.

“My mother’s family has been in the region for 300 years, and that part of the country is bred in me very much. The reason it’s affected my work is that there are lots of stories which mean something to me. I’ve known lots of them all of my life, and I have a feeling for the working class ones and mining ones. I kept finding all these great stories, like the Jarrow march story, and the Blackened Man story, and St Cuthbert [all of which the composer has set to music]. Whenever I tell stories from the north-east, I’m also thinking of their universal appeal too, of course, and the Kitty Genovese piece is a New York story!”

Will Todd also spent a number of years in Bristol, completing his BMus and MMus degrees there. It was a formative period, evidently, but “in all sort of odd ways. The course was quite dry in many ways. I learnt a lot of stuff that I’ve had to unlearn. They were thrilled if I wrote a 12-tone piece. They hated Brunel and were horrified by it. But that’s my natural style.

“The real benchmark is whether it’s great music or not and whether it deserves to be looked at. Any good show deserves to be looked at. The idea that the future of opera lies in the holy grail of Britten and Birtwistle is wrong, great though those composers are Good theatre music isn’t necessarily about purity and classical forms, it’s about good theatre. The theatrical moment demands a certain thing, and if it’s not derived from the opening cell of the score, that doesn’t matter. The question is whether it works on stage and serves the dramatic moment and engages the audience. You can’t let the music get in the way of the show sometimes.”

Todd’s musical, The Screams of Kitty Genovese, was shown at the New York Festival of Musical Theatre in September and received praise in all quarters. “It was great,” he says. “The cast was the best I’ve ever worked with. They were all professional Broadway performers great actor-singers. The director, David Edwards, was marvellous.

“It is an incredibly dark piece. I like stories that make us think, because we have more to think about in the world today than ever before – debt, climate change, bird flu in this morning’s newspaper alone. The arts have a responsibility to talk about these things. We have something unique in opera and the arts, which is the ability to educate via the emotional vehicle. I’m the last person who wants a set of operas that are didactic. But operas that bring any issue to the attention of people and engage the audience in a story they have to be a good thing. “

“We have something unique in opera and the arts, which is the ability to educate via the emotional vehicle.”
– on the power of music.

The cinema is something that Todd clearly approves of and thinks opera could learn a lot from it. “Films have been doing this forever picking relevant, up-to-date, exciting, poignant themes, and audiences love that. They love to witness something thought-provoking. ”

“Writing music should be fun, shouldn’t it?”
– on composition.

In the future, Todd tells me that he has ‘the opportunity of some fledgling work at the National [Theatre] doing some workshops. I hope we can take that further, because I love what they do. I’d love to work at the Opera House I’ve done some stuff with ROH2 before. I have to make a living, and the theatre’s the toughest place in the world to do that. Choral music’s the most lucrative thing I do by far, and I’ve re-found my enthusiasm for it. I’ve had a lot of success writing choral works this year, and people like performing the Mass in Blue. It makes me feel stronger about the lighter choral music which I’ve always written. I’ve always loved the music of John Rutter and it’s fun to write that sort of stuff. Writing music should be fun, shouldn’t it?”

Will Todd MP3s or CDs

Will Todd on Spotify

More on Will Todd
Interview: Will Todd