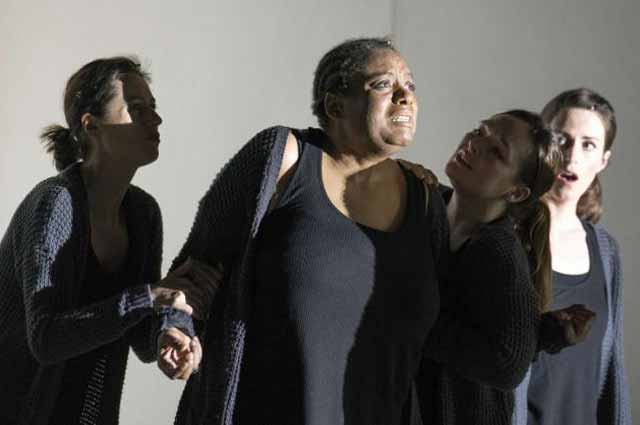 4.48 Psychosis was the last play that Sarah Kane wrote before her tragic suicide in 1999, and was performed for the first time in 2000. Given that it is about someone who contemplates, and then commits, suicide, it is easy to see it as purely representing Kane’s own state of mind, cries of despair or suicide note to the world. Such a view, however, ignores the experimentation with text that Kane had demonstrated from her very first play Blasted (1995), and which in itself provides many reasons why 4.48 Psychosis emerged in the way that it did.

The play takes its name from the time in the morning when Kane would often wake in her depressed state, and consists of one person pouring out her (suicidal) feelings. Given the musicality of the text, it always offered potential as an opera, and British composer Philip Venables’ version, created in a joint programme between the Royal Opera and Guildhall School of Music and Drama, premiered at the Lyric Hammersmith in 2016 in a production directed by Ted Huffman.

It proved to be an immensely powerful piece, but the production felt so finely tuned that it begged the question of whether a revival could ever develop anything or merely present a carbon copy of the original. In the event, although there do not seem to be any real adjustments to the staging, a second viewing reminds us of just how rich the piece is. As a result, anyone already familiar with the work will likely find themselves noticing more things, and hence engaging further with the creation.

Although the play is about one woman’s state of mind, theatrically it can be presented in many ways and this operatic version sees the woman played by six female singers. This allows (sometimes discordant) harmonies to be rendered, enables the various facets of her character to come to the fore, and alludes to the voices in her head that speak to her. The cast list names each of these women, with three (Gweneth-Ann Rand, Susanna Hurrell and Lucy Schaufer) bearing their own Christian names and three (Lucy Hall, Samantha Price and Rachael Lloyd) being assigned different ones. This is because this second trio are new to the cast, and so their characters’ names derive from the people (Jennifer Davis, Clare Presland and Emily Edmonds) who played them originally.

Interestingly, the programme two years ago assigned no-one names but simply listed the performers. While the change this time around may seem unimportant, it signifies, although is hardly responsible for, one difference in the way in which the piece comes across. Before, Rand undoubtedly had the biggest role, but it was still clear that she was only one of six technically equal incarnations of the same person. This time it sometimes feels as if she alone is the woman, with the other performers signifying voices or demons that could at least be mistaken for being external to, as opposed to an integral part of, her.

Nevertheless, this could be a result of the fact that Rand is so engaging as she convincingly portrays a person who is literally tortured to death by despair. There are, in addition, other ways in which the characters do seem to be more developed. One singer (Schaufer) takes on the role of the psychiatrist, even though she is the woman as well. Two years ago this circle seemed to be squared merely by the fact that when we saw the woman confronting the psychiatrist it felt as if she was recalling what the professional had said to her in their meetings. This may still be so, but examining the language also makes it seem as if the psychiatrist’s words are an embodiment of the self-doubt and self-loathing that the woman possesses. As a result, instead of helping and comforting her they feel accusatory and soul destroying.

The woman’s meetings with the psychiatrist once again provide some of the most successful moments in the opera as they are played out with two percussion instruments exchanging their sounds while the words appear as surtitles on the set’s wall. This is clever as the instrument ‘playing’ the psychiatrist varies (between a tubular bell, snare drum and saw cutting through wood), while the woman is always portrayed by a bass drum as if she finds it difficult to provide answers. It reaches a point where one forgets that a word or syllable has simply appeared on a wall at the same time as a drum has been struck, because it really feels as if the drum is uttering the lines. The surtitles also bring out points in their own right. When the psychiatrist sings, they provide the full ‘version’ while she only trots out half of the words. This changes their meaning entirely, and suggests that the psychiatrist too needs help, which she does because she is the woman.

Venables’ score, played by the CHROMA Ensemble conducted by Richard Baker, is poignant and atmospheric and suits the words very well. It allows some to be uttered slowly, and others to be rattled through in a haze, signifying how someone’s thoughts can rush in and pile on top of each other. While this 4.48 Psychosis undoubtedly constitutes an opera, the music is best understood as a contributory component to a sensory experience that is also created through word, setting, gesture, movement and sound in the widest sense of the word. We sometimes hear the radio play or ‘voice overs’ from off stage. Similarly, ‘arias’, cries of despair or religious sounding music can be abruptly interrupted by other sounds, revealing how thought patterns can shift and some feelings drown out others.

A second viewing, however, allows more opportunity to engage with the actual words as opposed simply to focusing on how they are presented ‘musically’. In this way, it enables a greater engagement with the original play by appreciating how someone can reach a point where they have such little sense of self-worth that they ask themselves what they have ever done for their friends to make them so supportive.

Hannah Clark’s set feels appropriately sterile, encapsulating a room with no windows, two chairs and a table, while also presenting a white, clean-edged area that enables the ‘drama’ of the woman’s mindset, replete with light and shade, to be played out to the full. The staging seems to remain very much as it did last time around, but while that is strictly true of many of the production’s elements, a return trip to this highly worthwhile opera will undoubtedly enable more to be discovered within it.