by Sara Miller
published: 7 May 2006 in Opera and Classical Reviews
Tweet 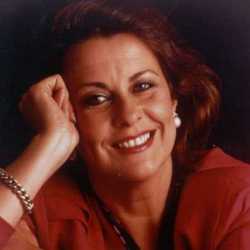 Last Sunday afternoon, the soprano Yvonne Kenny and her accompanist Iain Burnside transformed the Wigmore Hall into a small haven for the gods.

They presented their show ‘A Touch of Venus’, with which they will be touring Australia in the summer.

It was a good opportunity to hear Australian-born Kenny before she performs the starring role in Opera Holland Park‘s forthcoming production of Fedora by Umberto Giordano.

Both she and her onstage partner are renowned musicians. Kenny has sung on all the world’s major opera stages, including principal roles at Covent Garden. Burnside is also experienced, having worked with a dazzling list of high calibre singers, including his most recent recital with John Mark Ainsley.

The concert took the form of a medley of different genres linked by thoughts and poems from well known lovers throughout history. No formal song list was distributed, but because of the way that the pair introduced each piece it seemed unnecessary to have one. This also meant that the performers got the audience’s full attention the entire time and the atmosphere benefited as a result.

Although linked by a common theme, it was a challenging programme as it required complete character changes between each number. Kenny accomplished this flawlessly. As the concert goers were leaving the Wigmore Hall, I’m sure that most were delectably confused.

In a short space of time they had seen an awkward eleven year old Australian school girl with a strong working class accent and a painfully hopeless Crush on the sixteen year old boy with whom she waits at the bus stop (Victoria Wood, 1986); a jaded, sceptical woman who shows not even a glimmer of love for her pathetic husband, yet realises she has to stay with him to save her current high-maintenance lifestyle (Could I leave you? by Stephen Sondheim, 1971, rev. 1987); and a strong, mature, pensive, woman who lets you see inside her heart for a brief moment, painting a vivid image of her pain whilst emanating stillness and peace, in La delassdo, (The abandoned arr. Joseph Canteloube, 1879 1957).

I have never seen such convincing versatility. The audience was even treated to operatic highlights, for example, the mesmerising and electric stillness of Kenny’s performance of Handel’s ‘Oh Sleep’ from Semele (1743).

Whoever’s shoes she stepped into, Kenny entranced the room. She mesmerised and delighted, using her different coloured shawls to help her move smoothly through. She was always inviting whilst retaining an aloof sense of mystery to entice us, a true diva of the highest order. It was an honour to be entertained by her.

Specific mention has to be given to Kenny and Burnside’s performance of Benjamin Britten’s arrangement of O Waly Waly (No. 4 from Folk Song Arrangements Vol ii: British Isles, 1945-6). It was an intelligent performance that brought out the genius of the composer’s arrangement. Kenny’s richly lyrical melodic line mixed the pastoral element of the song beautifully with Burnside’s movingly raw yet controlled accompaniment. To have the two performers so sensitively connected to one another produced a cuttingly honest representation of the text.

The last verse of O Waly Waly was especially haunting thanks to the controlled dynamic growth that brought about the well-prepared climax. This is only one example of the numerous times where Kenny impressed with her superior technique, whether through her beautiful pianissimo top notes or her perfectly formed accents. These ranged from French to the aforementioned Australian, from American (for the Sondheim piece) to upper class English and these are only a few examples. All of these performances were completely true to their respective styles and were utterly convincing.

Towards the end, Kenny showed another facet of her character: her sexy playfulness. She finished with a set of racier songs, beginning with the concert’s namesake, One Touch of Venus (from the musical of the same name by Kurt Weill, 1943).

The event was seamless. From the pair’s dazzling entrance to their two encores, which included a devastatingly funny performance of the ‘Masochism Tango'(!), it was quite simply a wonderful programme, stylishly executed with elegance, charm and breathtaking glamour. The Australians are in for a treat!