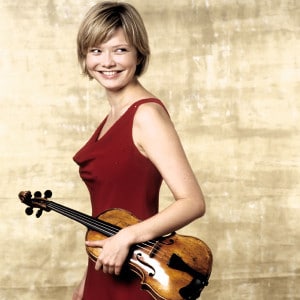 Classical today is a catch-all term, but in its first performance at the newly opened Milton Court Concert Hall the Academy of Ancient Music, currently enjoying its fortieth anniversary season, genuinely put on a classical concert in that the two composers featured were Haydn and Mozart.

The pieces performed generally represented the more playful side of the two composers’ output although that does not mean they were any lighter or less accomplished than their most soul searching works. With outstanding violinist Alina Ibragimova as the soloist and director for the concertos, and Pavlo Beznosiuk directing the symphonies as the violin leader, the AAM took instantly to the excellent acoustic of this new concert venue to generate a remarkable and uplifting evening.

In a pre-concert talk Ibragimova explained that in comparison to Mozart’s Fifth, which would come in the second half, Haydn’s Violin Concerto No. 1 in C major (c.1769) is quite conventional, but that by the same token it stands as a model concerto. In the event, she demonstrated just what a copybook example it is of the genre, precisely by revealing the exciting way in which it contrasts the bold dotted rhythms of the Allegro moderato, harking back to an earlier time, with the more ‘up-to-date’ style of the slow middle movement.

In the first movement she demonstrated her trademark ability to blend the bold, sweeping gesture with accuracy and an appropriate degree of mellifluousness. The Adagio featured long, striking bowing that built in intensity. In this slow movement she also achieved a precise and yet sensitive tone while the AAM provided the most marvellous accompaniment, whether they were bowing or playing pizzicato. The third movement cries for bravado and panache and there can be few things more thrilling in a concert hall than to hear a soloist such as Ibragimova letting rip while still measuring out every sound and gesture to perfection.

The story of the origins of Haydn’s ‘Farewell’ Symphony No. 45 in F sharp minor  (1772) are well known, and it is a tribute to the genius of Haydn that something that was written precisely to sound uncomfortable (the key of F sharp minor was incredibly rare at the time) can still be enjoyed as a proper piece of music a quarter of a millennium later. If – and it’s a big if – there was a criticism of the AAM’s performance, it was that it was so accomplished that they made what was supposed to feel difficult and awkward sound just a little too effortless!

If the idea of the orchestra exiting the stage could never take us by surprise today as it did Prince Esterházy at the very first performance, we were provided with one final innovation. In the original performance Haydn and Tomasini remained playing at the end. Here the two final violinists also got up to leave with the final ‘whispered’ note just leaving the string before they too were out of the hall. Needless to say though, the whole ensemble soon returned to rapturous applause.

After the interval, the AAM gave an excellent performance of the 14-year old Mozart’s Symphony No. 10 in G major and Ibragimova returned to the stage for his Violin Concerto No. 5 in A major of 1775. Designed to evoke the sound of Turkish military bands, here the final movement was so striking that one could almost feel the full might of the Ottomans who were still a threat to Austria at this time. The concert’s encore was the slow movement from Haydn’s Symphony No. 6 in D major (‘Le matin’) which, with its solo violin passages, allowed both Ibragimova and the AAM to shine once more.

The Academy of Ancient Music’s new CD, Birth of the Symphony: From Handel to Haydn, will be released on its own label on 28 October 2013. For further details and to order visit the AAM website.