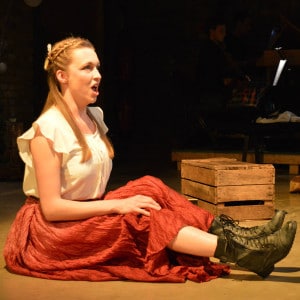 The programme ‘s invitation to the audience to “join the wedding celebrations” did not bode well, but thankfully our participation was to be limited to listening to Handel’s glorious music, sung by a very young cast including some truly promising voices and one real ‘find’ – as well as appreciating the playing of a tiny orchestra of period instruments. It’s no exaggeration to say that this production, in a tiny, low-ceilinged, basic space in what one must tactfully call an emerging part of London, was every bit as enjoyable as performances of this work on far grander stages.

Handel’s ‘little opera’ is especially suited not only to intimate venues but to youthful voices, and these ones all belonged to recent graduates whose exuberance and occasional assumed insouciance lent realism to this story of young love thwarted – for instance, seeing Polyphemus not just as a Caliban figure but a yahoo who could not possibly interest a gel like Galatea worked really well, and was just one of the director Jennifer Bakst’s excellent ideas.

Acis contains some of Handel’s most beautiful yet difficult arias, so it was a joy to hear how well these young singers surmounted the challenges. The undoubted ‘star’ of the show was 24 year old Nils Greenhow, whose Damon revealed sweetness of tone, quite breathtaking ease of articulation and crystalline diction, often bringing to mind a young John Mark Ainsley – and when it comes to Handel tenor singing, you really cannot pay a higher compliment than that.

Naomi Sturges’ Galatea and Charlie Murray’s Polyphemus were not too far behind, both singing with remarkable self-assurance and fluency, Galatea’s ‘Heart, the Seat of Soft Delight’ being especially mellifluous. Gareth Edmunds had a somewhat uncertain first half as Acis, but he rose to the occasion later with a stirring ‘Love Sounds Th’alarm.’ The Chorus contained yet more very fine voices, and Angela Hicks is definitely another name to watch.

Chris Parsons formed Eboracum Baroque whilst at York University, and his drive and enthusiasm must surely bring rewards for this small, dedicated group who respond to his direction with exceptional sensitivity. It’s remarkable that just two violins, one ‘cello, one oboe/recorder and one spinet, can create so warmly evocative a sound, and one which is so absolutely right for this music.

The same group will be presenting Monteverdi’s Coronation of Poppea with Ryedale Festival Opera, at the Arcola from August 29th onwards. Having seen this production at Ampleforth during the Festival, (reviewed here) we can thoroughly recommend it to all those who enjoy great music sung with total commitment by some of the most promising young singers and musicians around today.