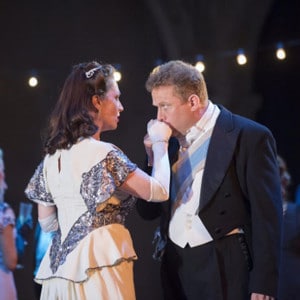 Opera Holland Park always strives to include at least one operatic rarity in each summer season. La fanciulla del West and Norma, which both featured in this year’s programme, are not that frequently performed in Britain, but the official label of ‘hidden gem’ must surely be reserved for Cilea’s Adriana Lecouvreur, despite its appearance at the Royal Opera House in 2010.

The heroine was, of course, a real person who took the Paris stage by storm in the early eighteenth century. This production, however, is set in the interwar period with the backstage area feeling more like a film set as it possesses lights, cameras and a well stocked table for tea breaks. It cannot actually be one because Adriana still performs to a live audience, exiting ‘our’ stage via the Holland House portico to wow the crowds, and herein lies a difficulty. The production makes some attempt to overhaul the time period and setting, but it does not go far enough in this direction to create a coherent alternative scenario.

In spite of this, the staging generally works well. The whole point of Adriana is that she is the same Diva offstage as on it, and so it is important that she spends her time backstage in costume. This means that she is free to swan around the twentieth century setting in original period costume, and the fact that the two elements should look incongruous only helps to mark out the actress’ individuality.

Act II features an Art Deco ‘villa’ of striped walls and minimal furniture that, perhaps deliberately, resembles the type of hospitality tent to be found at Opera Holland Park. There are a few old books piled on shelves that from the start seem as if they are only there for show, and so it proves when the alcove they grace is revealed as hiding the secret escape route.

The attention to detail throughout the production is strong, and manifests itself in many different ways. When Michonnet makes his thinly veiled declaration of love to Adriana, she simply pours herself a cup of tea as anyone might on set, the routine action only emphasising how little she cares for his feelings. This is mirrored at the end when Maurizio returns to Adriana, and Michonnet retires to her dressing room with a cup himself.

The chorus gently swaying with their backs to us during much of Act II’s shenanigans proves an effective, and not excessively distracting, visual device, while throughout the evening Adriana and the Princess de Bouillon swap black and white costumes. Whichever colour one wears in a scene the other sports the opposite, and by alternating them we are reminded of how crude and simplistic such labels as ‘good’ and ‘evil’ are.

As with Holland Park’s current production of Norma, the evening is made by two outstanding performances from the women leads. As Adriana, Cheryl Barker is possessed of the most rich and resonant soprano that proves the strongest of bases from which to launch an extraordinary performance. She is so much in control that in the upper register she focuses and shapes each sound to the point that even the most climactic moments possess immense sensitivity. The sound at the bottom of Barker’s register is intriguingly thick, and the manner in which she delivers the scene from Phèdre as melodram before suddenly going full throttle as she points an accusing finger is undoubtedly one of the evening’s highlights.

Tiziana Carraro is equally stunning as the Princess de Bouillon. Her clean, direct and striking sound provides an effective contrast to Barker’s own, and helps to stamp out the differing characters. Peter Auty puts in a good performance as Maurizio, without quite living up to the standard set by the women. There are plenty of moments when his voice can really open up, and when it does so the quality of sound is assured, but on other occasions things can feel a little tight and restricted. Auty’s acting is reasonable, but his tendency towards bold, monumental gestures does not blend well with the more naturalistic style of Barker and most other cast members.

As Michonnet, on the other hand, Richard Burkhard is perfect in his timing, expressions and mannerisms. His baritone voice is strong and hardy, yet produces a highly pleasing sound. Simon Wilding and Robert Burt excel as the Prince de Bouillon and Abbé respectively, while Manlio Benzi extracts a beautiful and focused sound from the City of London Sinfonia. Finally, the Act III ballet of The Judgment of Paris is excellently choreographed by James Streeter, and strongly executed by Principal Dancers from English National Ballet.