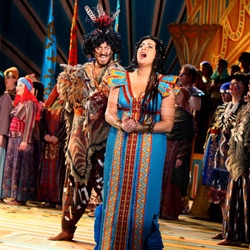 Left desperately needing a hit after a series of duds, English National Opera is unlikely to reverse its fortunes with its new production of Aida. Paying homage to the transience and insubstantiality of fashion, it may delight those going just for the costumes but will disappoint those wanting more than mere decoration from an opera. I wouldn’t expect it to be around for more than a season.

The chattering point of this new production is the use of flamboyant fashion icon Zandra Rhodes for the designs. Expecting anything of weight and substance from the fashion world would be foolish, so an elephant that looks as though it would take off in the slightest breeze is hardly surprising. The birds-of-paradise costumes and cartoon cut-out sets Rhodes provides make the singers look like mannequins catwalking in a bizarre dolls house and, in the absence of anything much going on underneath, it’s all as constricting as the stylised movement imposed on the cast by Robert Wilson in the Royal Opera’s most recent production.

Aida is worthy of its place as one of the quartet of late Verdi masterpieces, although you wouldn’t know it from this offering. For all its pomp and glory, much of the opera is played out on an intimate level involving just two or three protagonists and, unlike many a West End show these days, just sets and costumes won’t do. No matter what visual splendour is thrown at it, the big scenes are soon over and it has to work on a simple human level. Much is therefore down to the strength of the individual performances.

As the frustrated lovers, Claire Rutter and John Hudson begin weakly, battling the orchestra as much as their upstaging frocks. By the lower-key third act, though, Rutter is showing her best form and Hudson’s light pleasant tenor is coping much better with the more exposed vocal lines.

Jane Dutton stomps about, every inch the stage villainess, but bringing a degree of Verdian style to Amneris. A wasted Brindley Sherratt as Ramfis and Gwynne Howell as the Pharoah find their normally formidable personalities swamped, while Amonasro, the captured king, is trussed up like a pantomime Man Friday. It is great credit to the excellent Iain Paterson that he manages to rescue some dignity for the role.

Like Sally Potter before her, Jo Davies is here directing her first major opera production but, unlike the Carmen director, there is a sense that she has at least served an apprenticeship. Unfortunately, she is battling so hard against the designs that there seems to have been little scope for her to do more than move the performers around the stage. The acting is outdated and melodramatic and the whole enterprise dramatically inert.

In the pit, Edward Gardner proves once again that he’s one of the company’s real assets with, for the most part, a vibrant and driving performance. The final scene, Radames and Aida entombed in a living death, is chillingly effective and it’s no coincidence that all we see at this point are two spot-lit singers and Verdi’s exquisitely sad ending is allowed to breathe. At last, with the garish designs extinguished, the drama and the composer can take centrestage.