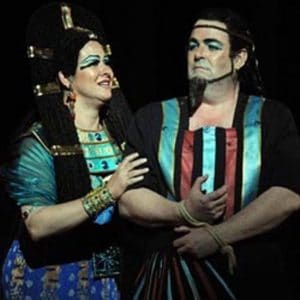 Notable for its outlandishly colourful costumes and sets by fashion designer Zandra Rhodes, ENO’s 2007 production of Aida received decidedly mixed reviews on its first outing. Many critics found it gaudy and dramatically unconvincing, and some were also unimpressed by aspects of the singing and conducting.

Nevertheless, the production turned out to be a popular success for ENO, and has now been revived for a second run. What can be said about Zandra Rhodes’s contribution that hasn’t been said already? Well, the cartoonish quality of some of the backdrops brings forth thoughts of Fred Flintstone, and some of the costumes are quite eccentric.

However, as a reinterpretation of the vibrant culture of the ancient kingdom of Egypt, I found it imaginative and visually compelling. There is nothing jarringly anachronistic, unlike many recent Wagner productions. Particularly impressive is the use of sliding diagonal screens to frame certain characters or backdrops at key moments, notably Aida and Radames at the very end of the opera. The lighting, originally designed by Bruno Poet and revived by Kevin Sleep, is also highly atmospheric.

Jo Davies takes a low key approach to direction, leaving it largely to Verdi’s music to provide the emotional and dramatic framework. This works well for the most part, but the confrontation between Amneris and Aida at the beginning of Act 2 is notably melodramatic and unconvincing. The Triumph Scene works much better, with fluid movement of the massed crowds and a clever representation of an elephant. The ballet section features some amusingly quirky dance, very well performed, and some impressive acrobatics.

Many of last year’s cast members have returned for this season’s run. Claire Rutter provides a well sung and acted Aida, although musically a little detached in the final act. John Hudson makes a suitably solid Radames, not always dramatically convincing but vocally and musically pleasing. Jane Dutton’s performance of Amneris has presence although she struggled on this occasion with some of her low chest notes. The most impressive performance comes from Iain Paterson, who despite having the most ridiculous outfit of the evening, provides singing of dignity and splendour. Matthew Best, new to the cast, brings a sterling voice and a hint of menace to the role of Ramfis.

The conductor for the original run was Edward Gardner. This year, Gérard Korsten, making his conducting debut with ENO, sustains an impressive level of intensity throughout the score, sensitive to the needs of the singers but able to summon forth stirring sounds from the massed forces when required. The onstage trumpeters during the Triumphal March play with a thrilling combination of nobility and vibrancy, and the choral singing is simply magnificent.

Whatever one thinks of the Rhodes glitz, this ENO production is a basically straightforward presentation of Verdi’s opera, dramatically a little clunky but very convincing musically.