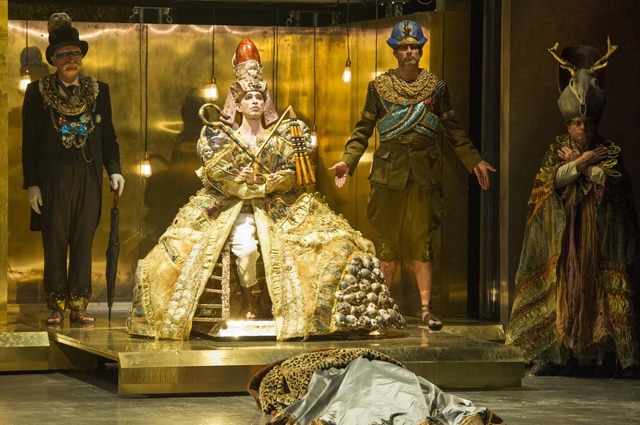 Akhnaten (1984) is the last of Philip Glass’ three operas on the lives of great thinkers and visionaries. It is also the last one to be staged in London in recent years. The Barbican Theatre tackled Einstein on the Beach in 2012, while English National Opera mounted the Gandhi-themed Satyagraha in 2013. Akhnaten deals with the ascent and fall of the 18th Dynasty pharaoh Amenhotep IV, who abandoned traditional Egyptian polytheism and embraced the sole worship of Aten, the sun god, whose name he partly adopted. In many ways it is a tricky work to stage. Unlike the previous two operas in the Glass trilogy, it never really explores the motives behind Akhnaten’s religious conversion or his inner psychology. But it does give some insight into the mystical spirituality that inspired the pharaoh and his court.

Director Phelim McDermott achieved this through symbolic lighting and stage props. Projections of hieroglyph symbols and bold images of the sun affirmed the ancient Egyptian setting, contrasting with the modernist ‘Glassworks’-style set. Kevin Pollard’s costumes also included recognisable Egyptian features, but hinted too at past imperialism: Queen Tye, Akhnaten’s mother, resembled Britain’s Queen Mary; the High Priest was dressed as a mitred archbishop; and Horemhab and Aye looked respectively like a colonial-era general and civil service administrator. Assorted headdresses also suggested a wider world of tribal cultures. Modern touches were pointedly significant – like the surgeons attending to the mummification of Amenhotep III (and later to that of his son, Akhnaten). Cleverly suggestive, too, was the increasing evidence of Akhnaten’s sexual ambiguity. 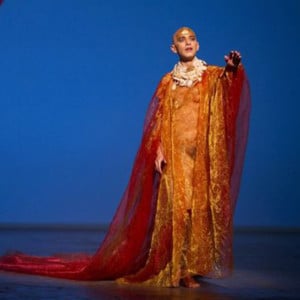 Less effective was the frequent appearance of the Gandini Juggling troupe. As a metaphor for the ascent of the solar object and Akhnaten’s fascination with it, their on-stage games were a bit over-done and proved something of a distraction. At one point it all got a bit Cirque du Soleil, with sections of the audience breaking out into spontaneous applause. Even the chorus was roped into the ball-tossing fun, together with some hand-wiggling gestures.

Musically, Akhnaten lacks the variation of Einstein and Satyagraha. Apart from the rhythmic and instrumental vitality of the opening funeral scene, much of the score consists of lengthy, repeated vocal declamatory passages, usually in English, but sometimes in Akkadian and Hebrew (the lack of surtitles didn’t help much here). But skilful stage direction turned long scenes into something more beguiling – like the sensual duet between Akhnaten and his wife Nefertiti, and the intimate domestic scene with the royal couple and their six daughters.

The English National Opera chorus provided muscular and emotive singing, together with some busy stage work. Conductor Karen Kamensek sustained the orchestra’s momentum, never flagging, even in the longest passages. She and her players also found moments of individual beauty in Glass’ tightly controlled score.