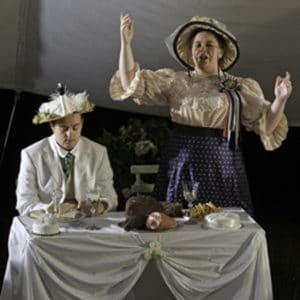 Founded in 1987, British Youth Opera celebrates its 21st Birthday this year with productions of The Magic Flute and Albert Herring and, if the opening night of Britten’s comic opera is anything to go by, this is an organisation that has really come of age. And age is a crucial factor in this work, with the cast having to span the whole range from maturity to childhood.

Make no mistake, this is no ordinary youth group but, with most of the cast at the end of their formal training and some on the brink of significant operatic careers, they achieve an incredibly high standard. If it takes a while to get used to the crusty burghers of Loxford being played by performers in their twenties, this is soon forgotten because of the precise and colourful characterisations served up by the talented cast. Not surprisingly, because she’s already a young professional of note, Katherine Broderick shines as the matriarchal Lady Billows, whose waste bin overflows with the sins of the parish.

At the other end of the age range, singers are required to play the ball-bouncing scamps of the village, although young Adam Rollingson‘s lively contribution adds an authentic note. Where the singers are playing closest to their own ages, we get the strongest performances of the evening. Benedict Nelson and Tania Mandzy are a sexy couple as Sid and Nancy, basking in the glow of their coveted peches (both peaches and sins in French) and defying their elders at every turn.

Ben Johnson‘s Albert Herring is quite outstanding. This young tenor, a prize-winner in last week’s Wigmore Hall International Song Competition, is enormously appealing as the virginal mummy’s boy who breaks out to find his true self somewhere beyond the bounds of a narrow-minded and oppressive society. The exact nature of Albert’s escapade is not revealed but surely what Britten and librettist Eric Crozier intended would have more than made Lady Billows blush. Even in a work of this nature Britten’s oft-repeated and heavily-disguised preoccupations can be found lurking.

William Kerley’s brilliantly observed direction can hardly be faulted. Word-pointing could be punchier at times; when you have three rhymes together (even though many are curiously half-rhymes), it pays to drive them home and here there is a tendency for them to trail away. That apart, Kerley and conductor Peter Robinson pay heed to the wealth of details that Britten and Crozier give them, the latter steering the Southbank Sinfonia with characteristic relish and tremendous precision.

Not to give a complete cast list is not to denigrate the contributions of the rest of the company. This is a wonderful ensemble performance, full of technical proficiency.

Albert Herring may be Britten’s only comedy but this is a score of such deftness and invention that the piece is bound to leave you wishing he’d ventured into the territory more often. It is both genuinely funny and, like so much of the composer’s output, hauntingly beautiful. The ensembles, particularly the last act Threnody mourning the death of Albert, only to be broken by his jaunty return, are sublime.

With Britten’s opera performed rarely (ok, Glyndebourne is touring it this autumn), I can only advise you to hurry along to the Peacock and snap up the remaining tickets for the two final performances of the British Youth Opera’s all too short run.