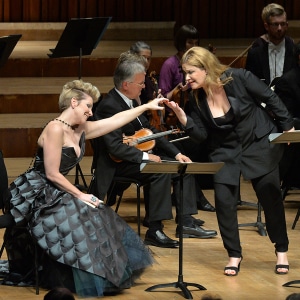 Alcina is one of Handel’s most beloved and beguiling operas. It’s a varied feast of delights, with choruses and dance numbers complementing superb solo arias and vocal ensembles. A slightly disappointing decision, therefore, by Harry Bicket and The English Concert to dispense with the ballet music (composed specifically as a vehicle for French dancer Marie Sallé at the 1735 premiere). There was no chorus either. Instead, some of the principal singers took on the role of Alcina’s former lovers freed from her spell at the end of the opera.

But this concert performance was all about the stellar solo cast. Oddly, they all sang from scores on music stands, despite most of them being experienced Handel interpreters. Perhaps this was to enable them to act out their parts more freely on the Barbican stage. Even this proved rather hit and miss – sometimes amusing, but often distracting or downright daft.

More arresting than the on-stage histrionics was the vocal power and intensity of the singing. Even the smaller roles were handled with focus and integrity: the clear bass of Wotjek Gierlach as Melisso; Anna Devin’s pure-toned Oberto; and Ben Johnson’s lyrical Oronte. Alcina’s sister, Morgana, emerged as a naïve, if spoiled, schemer in the hands of Anna Christy, whose bright and sparkling ‘Tornami a vagheggiar’ proved the show-stopper of the first act.

Alice Coote and Christine Rice were well-matched as Ruggiero and Bradamante (aka ‘Ricciardo’), the lovers separated and then reunited after a complex catalogue of emotional trials, intrigues and gender-swapping confusion. Rice’s tone was firm, if a little stodgy at times. Fresh from performances of Xerxes at English National Opera, Coote invested her interpretation of Alcina’s latest love interest with ardour, bravado and a touch of vulnerability too.

But it was Joyce DiDonato in the title role who the audience had come to see and hear. Dressed in an outrageous Vivienne Westwood frock (which had the unfortunate appearance of an oil slick – a comment, perhaps, on Alcina’s polluting influence over the magical island?) and sporting a high, chiseled hairdo, DiDonato certainly looked every inch the magical and slightly scary enchantress. Suffice to say that her qualities of technical command, steely control and empathetic characterization made for an outstanding Alcina. Across the six arias which Handel gave his enchantress, DiDonato traced every step of the heroine/anti-heroine’s slide to disaster, from the almost self-effacing ‘Si, son quella’, through the agony of ‘Ah! Mio cor’, to the spellbinding ‘Ombre pallide’, and the final lament of ‘Mi restano le lagrime’.

During all of this, DiDonato and co. were steadily supported by The English Concert, led from the harpsichord by Harry Bicket. Although the small orchestra (only 22 players, including Bickett) tended to take their lead from the singers, they set the atmosphere perfectly for each aria, and the playing itself was spot-on. The clarity of the woodwind in particular was especially noticeable, and the strings never sounded a single sour note.