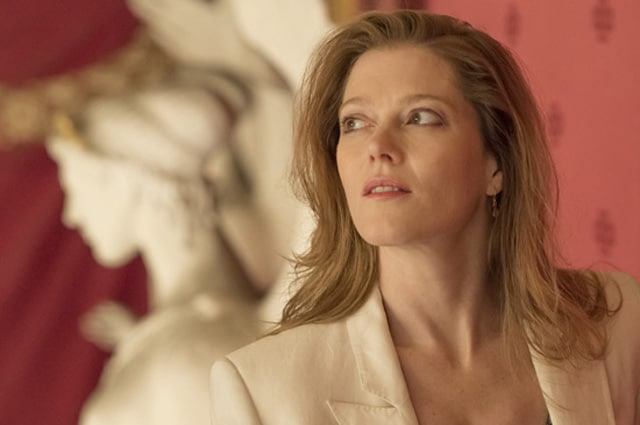 Lewis Carroll’s Alice books have been subject to many adaptations over the years: some are witty, some sinister, and others hallucinatory. The combination of Carroll’s words, and the innovative and challenging intelligence of the Irish composer Gerald Barry – whose music manages to portray all of these – would seem to be a match made in heaven, and so it proved to be at the Barbican on Monday evening. Alice’s Adventures Under Ground, receiving its European première, is Barry’s sixth opera; it is short (just under an hour long – although this was a concert performance without any of the action, which was described via the surtitle screen) but highly concentrated, and any more would have overpowered.

Barbara Hannigan took the title role, portrayed throughout as a kind of young Miss Havisham – in this production proving that Alice had indeed gone mad, but then (as the line has it), “all the best people usually are”, and her exuberant brilliance (and that of of her companions on stage) proved this to be the case. Her initial descent into the rabbit-hole became a hysterically stuttered patter of high notes: “down down down down …” against the rising arpeggios of the orchestra (portraying the walls of the tunnel heading in the opposite direction). This obsessive ostinato repetition of words was a feature of the opera: the four bottles and the four cakes (Allan Clayton, Peter Tantsits, Mark Stone and Joshua Bloom) sang “drink me, drink me” and “eat me, eat me” with a similar insistence, as did the members of the Mad Hatter’s tea party with the words “no room”.

Barry’s compositional style is eclectic – swerving between witty pastiche, complex mid-20th-century modernism and minimalism – and the theme of the opera allowed him full rein to play with all of these. The Verdi-esque opening chords announced ‘grand opera’, but like Alice’s looking-glass world, it soon transmuted. There were touches of Stravinsky and Poulenc in there (the latter accompanying Jabberwocky sung in French); a Bond-theme-esque march accompanied the White Queen’s messenger; some fantastically chaotic writing was scored for Alice’s own version of the White Knight’s song (sung earlier by the White Knight to the tune of ‘Ode to Joy’); a Mozartian moment (overlaid with vocal chatter) was used for the Queen of Hearts’ ‘piano croquet’ lesson; a magnificent ensemble piece (with wind machine) accompanied the words “it’s a great huge game of chess that’s being played all over the world”. Two scenes of gloriously comedic word-painting stood out: the ponderously mournful gavotte (for tuba and two trumpets) accompanying the battle of the two knights, and the repeated ‘wow’ of the Duchess’s baby crying, sung by the four men.

The other singers also deserve mention. Allison Cook (who sang the Red Queen, the Queen of Hearts and the Duchess, among other roles) used her steel-within-velvet voice to great effect, and Hilary Summers produced some wonderfully sure low chest-voice notes in her portrayals of the Cook, the Dormouse and the White Queen. Also to be praised was the quality of playing by The Britten Sinfonia, who rose to every orchestral challenge Barry gave them.

The opera definitely needs more exposure, as an initial listening only whets the appetite for hearing it again to understand more of the nuance. In many ways, it is almost opera buffa, or even operetta: there is a lot of spoken dialogue, and the whole feels as though it needs a visual element to complement the music and words. It is to be hoped that a fully staged version (or, possibly something multi-media) will eventually pop out of the rabbit-hole.