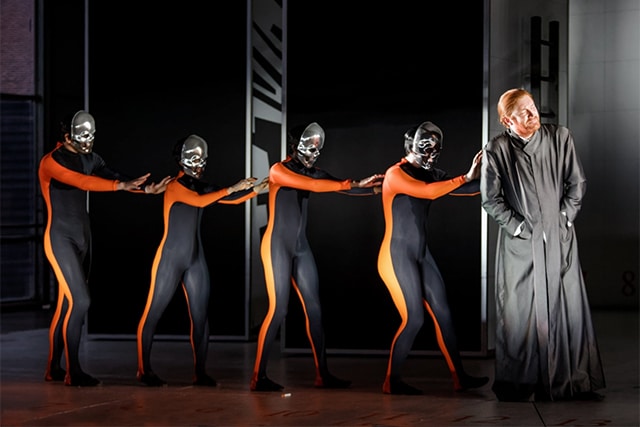 An advertisement for the premiere on 25 May 1715 of “…a New Opera call’d Amadis, all the Cloaths and Scenes entirely New…” and with “…a variety of Dancing…” introduced audiences to a now rarely performed work with the smallest cast of any of Handel’s operas. Garsington’s new production and designs, by Netia Jones, with brilliant lighting by Jake Wiltshire and mesmerising choreography by Anna Morrissey, stayed faithful to the 18th century love of spectacle whilst creating a stage experience that is modern without crassness or superfluity.

Just seeing those four singers lined up – social distancing deftly maintained – made you think of scenes from Così fan tutti or Idomeneo, where the protagonists each express their conflicting feelings. Christian Curnyn and The English Concert gave a superb account of the unjustly neglected score, pointing up the characters’ crises with genuinely Handelian wit and aplomb; it was a real pleasure to hear this music given with so much verve and devotion.

The casting was just about ideal, with Sonja Runje a sensitive, lovable ‘hero’ for whom Handel’s virtuosic writing presented no fears; ‘Sento la gioia’ – probably the opera’s only well known aria – comes at the very end of the piece, and its stage ‘fireworks’ accompany the whizzing passages in the music – Runje sang it as though it had just been written for her. 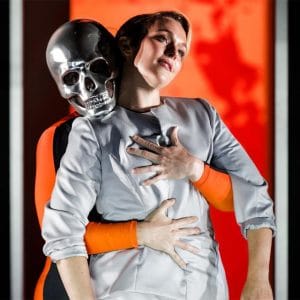 Anna Devin’s Melissa was fascinatingly presented more as a frustrated, obsessed lover than an evil sorceress, and her silvery soprano made light of her fiery music. Tim Mead’s Dardanus was as beautifully sung as you would expect from him, although there were times when his predicament seemed irritable rather than anguished – and ditch the smoking, please. Rhian Lois was a sympathetic Oriana, singing with lustrous tone and nuanced phrasing, and 13 year old Edmund Visintin stole the show at the finale with his poised, sweet-toned Orgando / Cupid / ‘magical being.’

The striking, mostly black and orange staging, with projection by Lightmap, combined optical illusions, vibrant costuming and sheer inventiveness, to stunning effect. The main influence seemed to be the Periaktoi or revolving device mentioned as early as 14 BC and used extensively in 17th and 18th century staging, with much use of perspective and even a nod to the Wormsley ‘Island Pavilion’ with its Jeff Koons ‘egg.’ The bright orange dresses and suits of the dancers focused the eye on their wonderfully supple movements, in contrast to the grey and black worn by the protagonists.

First rate singing and playing of an unjustly neglected work, inventive design, glorious surroundings and meticulously managed Covid-19 precautions – what more could one ask for?