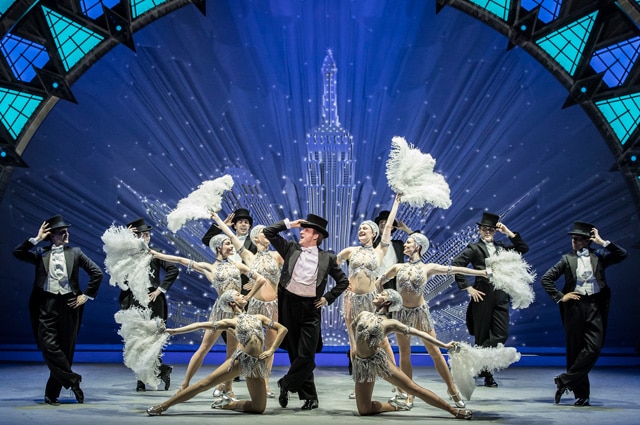 Like Cole Porter’s High Society, Rodgers and Hammerstein’s State Fair and Gene de Paul and Johnny Mercer’s Seven Brides for Seven Brothers, George and Ira Gershwin’s An American in Paris was a film first and a stage musical only later. It may have been the success of the piece’s original 1951 incarnation that made so many theatre directors afraid to go near it but, following an adaptation by Ken Ludwig in 2008, choreographer Christopher Wheeldon stepped up to the plate to create this new version that was first seen in Paris in 2014 and then on Broadway in 2015.

Wheeldon has many works at the Royal Ballet to his name, including the full-length ballets Alice’s Adventures in Wonderland and The Winter’s Tale, and, quite reasonably given that the piece naturally lends itself to this, his primary concern seems to be with the dancing. Nevertheless, the story is entirely reworked to make it fit for stage, while the set designs stand out as something special.

In this version Lise’s endeavours to make it as a dancer are put centre-stage, and a greater role is given to the composer Adam, who joins Henri and Jerry in the battle for Lise’s affections. However, any changes to the story in this way do not alter its spirit, and the greater difference lies in the choice to set the action not just in post-war Paris, but immediately following the liberation. This makes the work deeper and a little darker as the archetypal image of ‘Gay Paree’ vies with the realities of rationing and hardship. In addition, the threat hangs over everyone of how their behaviour in the war, whatever that may have been, will catch up with them now. One scene reveals the public humiliating of a collaborator, while it is implied that the wealthy Baurel family only sustained their ballet company during the war by accepting Nazi money, even if the reality turns out to be rather different.

The production’s aesthetic is deeply impressive. Bob Crowley’s set consists almost entirely of props that are wheeled on and off for the different scenes, and a screen at the back upon which projections, courtesy of 59 Projections Ltd, appear. This ensures that there is always a large stage area for the dancing to take place in, while the experience feels exceptionally fluid because the projections mean that effects can be generated in an instant and minutely manipulated. The opening ‘Concerto in F’ features monochrome images, which hint both at the darker side of Paris in the aftermath of liberation and the pencil drawings that artist Jerry Mulligan might create. At the piece’s close these give way to a projected image of Paris sporting a sunset glow, which is cleverly constructed so that the viewpoint from which we gaze on the scene is altered as we continue to look upon it. 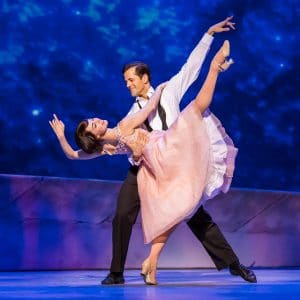 The props are highly effective so that counters and other items can create a chic and convincing perfume shop in a second, but it is the interaction between prop and projected image that is most effective. Buildings appear in front of the screen, being lowered in on the same diagonal that they form on the street as we look at them. Images can appear on those props that have flat surfaces as well as the back screen, while at the start the interaction of projected image and real material enables Nazi flags to be torn down and replaced with a Tricolore in an instant.

The dance routines are, by and large, exceptionally strong as the skills of the dancers and choreographer speak for themselves. However, all of the routines cover the standard ground that we would expect in such a musical, and rarely take us to places unimagined. There is the riotous ‘I’ve Got Beginners’ Luck’, which disrupts the normal decorum of the perfume shop; the interruption of the ‘worthy’ ballet ‘The Eclipse of Uranus’ with the more toe tapping ‘Fidgety Feet’, and ‘I’ll Build A Stairway to Paradise’, which moves from a third rate Paris joint to a glitzy Broadway stage as Henri dreams of how it could all be for him. Enormous control is exerted over everything, which is technically appropriate and fitting for the work, but seldom allows numbers to be launched higher and higher almost into infinity. For example, ‘I Got Rhythm’, danced here as an ensemble number, is certainly built up, but its three distinct stages feel very obvious as a break is built in between each, first as we see a transition from day to night and then as the group witness a power cut.

The enormous ‘An American in Paris’ routine at the end of the film is substituted for one in which Lise is actually performing in a ballet. The aesthetic is consequently quite different as it seems to be grounded in the Ballets Russes as seen before the Second World War, and this makes sense. Fashions did not move on during the war so anything being produced in the direct aftermath of it could only draw on what went before. The set designs are brilliant: large colourful shapes descend, while Crowley’s beautiful costumes of reds, whites, yellows and blues recall Malevich. However, although there is a wonderful pas de deux between Jerry and Lise, which expresses so much about their feelings for each other, this is used as a launchpad to enable Lise to execute the rest of the piece by truly feeling joy. In sum, the routine lacks the same senses of angst and threat as are displayed in the film, though it is impeccably danced.

The various pas de deux between Leanne Cope (Lise) and Robert Fairchild (Jerry) are captivating, which is unsurprising given the background of each. The story of how Wheeldon took Royal Ballet First Artist Cope backstage after a performance of Swan Lake and asked her to sing ‘The Man I Love’ into his iPhone as her ‘audition’ has already achieved iconic status. She had to learn to sing and act while attending the dance classes for the routines, but this does not necessarily show as her voice is possessed of both sweetness and intrigue. When we see her and Fairchild, a New York City Ballet Principal Dancer, move, the level of subtlety and expression in their every gesture is tangible. However, while his voice is quite warm and smooth, it is not particularly powerful and the production lacks someone with the all-round strength of a Gene Kelly at its centre. Nevertheless, the cast as a whole is excellent and Jane Asher, who was presumably hired for her acting but is still seen to sing and dance a little, is particularly good value as Madame Baurel. Notwithstanding the fact that the orchestra cannot bring quite the same level of richness to the music as the John Wilson Orchestra might, because a West End run necessarily demands the forces to be smaller to make ends meet, the sound it produces is impressive, being both lively and precise. This show did not win four Tony Awards for nothing.

Ashley Day and Daniela Norman play Jerry and Lise respectively at certain performances. For further information visit the An American in Paris: The Musical website.