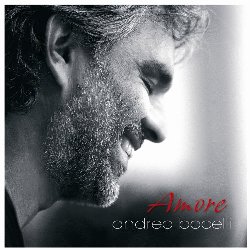 Even amongst so called ‘cross-over’ artists, Andrea Bocelli is something of an anomaly. The Russell Watsons of this world are incapable of taking on the full-length opera recordings that Bocelli attempts and which give him an ounce more credibility with classical buffs, but Bocelli’s no pop singer either.

This new album, entitled Amore, is the best I have yet heard from him, and although it won’t please classical purists (at whom it is in any case not aimed), Bocelli’s followers will be delighted.

It makes excellent easy listening, the Latin inflections of most of the tracks bringing a little sunshine to the cold winter months. The first track is Amapola, which Bocelli sings with exquisite colours and an impressive ascent to the height of the third phrase of each verse. The backing will be a bit too ‘Hollywood cheese of the 1950s’ for some tastes, but on the other hand, it brings with it some of the glamour of the period.

Many of the songs on the album have a relaxed Latin feel, which may not bear close critical scrutiny but are nevertheless entertaining. Bocelli seems completely at home in the repertoire, resisting the temptation to force the voice as some of his senior (and more distinguished) colleagues have done. Besame Mucho, for instance, shows a side of Bocelli’s voice we don’t usually hear: calculated restraint. Over a cool guitar and percussion background, he insinuates the melody into the music, relishing the chromatic lines.

The spoken passages of Les Feuilles Mortes are distractingly self-conscious, but Somos Novios (better known in English as Perry Como’s It’s Impossible) is a surprisingly successful duet with Christina Aguilera. Warm strings underscore Solamente Una Vez – Bocelli’s rendition is sentimental, though many listeners may not mind about that.

Stevie Wonder’s harmonica and vocals on Canzoni Stonate and Mario Reyes‘ flamenco guitar on the more upbeat Jurame add some interest to the slight blandness of the album. The one big mistake is the inclusion of Can’t Help Falling in Love (the Live at Las Vegas Version, we are told). Bocelli’s voice is out of focus, and the song is ghastly and hardly fits into these surroundings. The contrast between the live and studio recordings only shows how much better Bocelli sounds in the studio.

However, on the whole Amore does exactly does what it says on the packet, and Bocelli fans may find it exceeds many of his previous efforts.