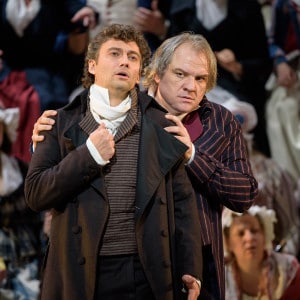 It’s not often that you see a director look as nervous as David McVicar did on taking his bow this evening, but there was no need, since his new production of Giordano’s star-tenor slice of verismo had nothing to frighten the horses or stimulate the booers. Indeed, it was almost too pretty; I’m sure that someone will complain that the citizens were not sufficiently grubby, but Robert Jones’ sets and Jenny Tiramani’s costumes can claim plenty of historical accuracy, and despite one or two uncertain moments, the evening was strong on McVicar’s characteristic combination of classically elegant stage pictures and attention to personenregie.

Nobody stages this opera unless they have the tenor to fill the lines and utter all that Shelleyan stuff about the nature of poetry without looking a twit, and obviously Jonas Kaufmann is Andrea Chénier, even more so than Plácido Domingo was when the ROH last staged the piece some 30 years ago. Giordano saw his work as centred around a ‘star’ tenor, and the Chénier at the first performance, Giuseppe Borgatti, went on to become known for his Wagner roles – a not dissimilar career to that of Kaufmann, with his prowess in both Italian and German opera.

It must be a temptation for the tenor to flaunt his B flats in the great Act I ‘Improvviso,’ Un dì all’azzurro spazio and to hector his audience, both onstage and in the auditorium, but Kaufmann resists it, and his singing is all the more affecting thereby. He does not have as huge a voice as Corelli – arguably the greatest Chénier of the past – but the melting beauty of his intonation and the nuance of his phrasing are sublime. Those B flats are pretty ringing, too, as well as stunning passagio notes – ‘firmamento!’ – and he gives just enough emphasis to ‘Non conoscete amor’ for the phrase to be urgent but not blustering. Come un bel dì di maggio was almost more affecting, ‘carezza di poesia’ the perfect example of what characterizes Kaufmann’s art – the absolute mastery of intimate narrative, voiced with quiet yet intense fervour. After this, his 2017 Otello here is even more eagerly anticipated.

Chénier’s beloved, Maddalena, is in some ways a difficult character to portray, given her development from vacuous cream-fed gel bitching about the ‘torture’ involved in being pretty, to a woman for whom death is sweet if endured with her soul mate, and who nobly saves another woman’s life. Eva-Maria Westbroek convincingly portrayed Maddalena’s torments, and sang with real dramatic edge and power: ‘La mamma morta’ was the centre-piece it ought to be, incisively phrased and touchingly characterized.

Želko Lučić brought his considerable experience of the great Italian baritone roles to the part of Gérard, singing with fluid, rounded tone and giving a sympathetic portrayal of this fascinating, flawed character. Roland Wood made a notable house debut as a warmly likeable Roucher, and Rosalind Plowright and Denyce Graves were luxury casting as the Countess and Bersi respectively. Fine cameos were evident throughout, no more so than in Elena Zilio’s affecting Madelon.

Antonio Pappano threw himself into the score with the devotion of an enthusiast, and that feeling was rewarded with vigorous, vivid playing from an orchestra which clearly loves this meaty, diverse score as much as the conductor does. Renato Balsadonna once more coaxed incisive, convincing singing from the chorus. If you can’t get to experience the production in the opera house, there’s a chance to see it ‘live’ on screen on January 29th. It’s highly recommended – and not only for the ‘star’ tenor, but for the other strong performances and the un-preachy, admirably clear production.