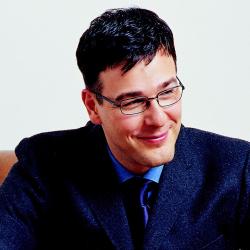 Judging by this concert, counter-tenor Andreas Scholl can sell out the Barbican Hall even if only two Bach Cantatas – BWV 35, Geist und Seele wird verwirret, and BWV 170, Vergngte Ruh, beliebte Seelenlust – are indicated in the programme.

True, those two cantatas guarantee 45 minutes of Scholls singing but nevertheless – the sold out Hall indicated the esteem in which Scholl is held.

I note this with particular interest, as a decade or so ago a counter-tenor, however good, would have been pleased the fill the small Wigmore Hall. This time many people queued for return tickets in vain and the long queue at the CD signing was also of note.

Scholl is an artist of integrity. No cheap gimmicks for him; he relies on the words and the music which he performs. His approach appears to be primarily intellectual but it includes his obvious desire to communicate. Scholl tells a story and maintains contact with his audience throughout. His recitatives were magnificently performed: he really recited the story. In many cantata performances, more often than not, recitatives are treated as solo arias yet recitatives surely should be recited. It is extra-ordinary how Scholl delivers the story without any operatic movements: he literally stands and delivers.

I am not sure if Bachs writing for the alto voice as in the cantatas performed on this concert causes particular technical problems for a counter-tenor. Scholls top notes were pitched slightly flat far too often, especially in the first cantata. The human voice is very fragile and Scholl might have had a touch of cold or similar. And though his musical consideration (for structure, phrasing, dynamics) is beyond reproach, I was wondering if he enjoyed singing as much as he clearly enjoyed performing and communicating. I could not help thinking of English counter-tenor Christopher Robson whose heartfelt (as well as intellectual) singing of Handel opera parts at the English National Opera fascinated a decade or so ago. After Scholls concert I resisted the temptation to purchase a CD of his. However, I will look out for a Robson CD.

Andreas Scholl was accompanied by the excellent Accademia Bizantina chamber orchestra who also performed Handels Concerto for Organ, Op. 4 No.4 as well as Bachs Concerto in D minor for Two Violins, BWV 1043. These two items were surprises as they were not shown in the pre-concert publicity. It is nice to have surprises but not if you want to go well prepared to the concert.

Apart from the two cellists and the conductor/organist, players of the Accademia Bizantina stand throughout their concerts. The ensemble is small or at least it was on this occasion consisting of six violins, one viola, two cellos, one double bass, two oboes (with a third joining in Cantata 35), one harpsichord and the chamber organ. Their ensemble work is so excellent that I was taken by surprise when I heard a single untidy chord.

Ottavio Dantone proved an excellent director as well as organist. His phrasing in slow movements created the illusion of singing; his fast movements showed efficient keyboard technique. Some of his tempi in fast movements – such as in the two orchestral movements (Sinfonia) of Cantata 35 and in the first movement of the Bach double violin concerto seemed rushed, but he might be following a trend according to which one should play fast baroque movements really fast.

My ears might have played tricks with me but I thought that the biggest applause followed the performance of the Bach double violin concerto which of course makes easier listening than either of the Bach cantatas. The balance between first violin soloist Stefano Montanari and second violin soloist Fiorenza De Donatis was fine but also odd at the same time. Montanari looked and sounded as if he was skipping notes indeed, he almost looked (and sounded) like a caricature of baroque performance practice. On the other hand, Donatis appeared to have observed baroque performance rules but also produced beautiful singing phrases. I vote for Donatis.