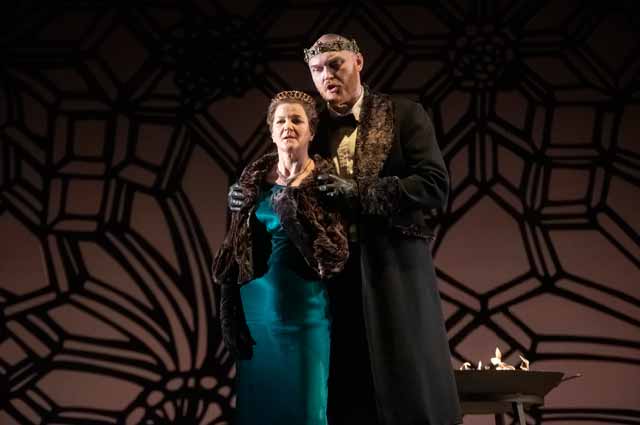 If it is ambitious for a 500-seat opera house to attempt Der Ring des Nibelungen, it is only slightly less so for it to take on Anna Bolena, a Donizetti masterpiece that still does not appear with the frequency with which its brilliance merits. In the event, however, Longborough Festival Opera proves more than up for the challenge as Jenny Miller’s new production has the concept and dynamism, not to mention the singers, to generate a highly memorable evening.

As Roger Parker notes, audiences at the opera’s premiere in Milan in 1830 did not see the Tudor era as some golden age, as even we are inclined to do today. For them it revealed the dangers of ‘absolutism’, and thus Anna Bolena issued warnings at a time when Milan was involved in political arguments about the best forms of government. The sense of intrigue that was thus written into the work is brought to life here through two particular devices, and the first is the use of masks. On entering the auditorium, audience members are handed a copy of W. B. Yeats’ poem ‘The Mask’ which reads ‘It was the mask engaged your mind, / And after set your heart to beat, / Not what’s behind’. It thus feels highly appropriate for describing the situation Anna finds herself in, while chorus members regularly don them over the course of the evening, particularly at times when they are detaching themselves emotionally from the plight of Anna or any of the other protagonists.

The second is the use of a filigreed backdrop, courtesy of designer Nate Gibson, that presumably reproduces the Perpendicular Gothic ceiling of St George’s Chapel as much of the opera’s action occurs at Windsor Castle. In this way, it can be seen through so that figures lurking behind it can highlight subtexts, play out past events or simply suggest that spies lie all around. The chorus are on stage for an enormous amount of time and, although this is because they are required to sing in the relevant scenes, their continued presence also makes the point that nothing is truly secret.

The costumes are modern, and during the Prelude everyone graces the stage as if they are enjoying a summer party at Longborough or Glyndebourne. One courtier sits in Anna’s throne playfully trying on her jewellery and gloves, before the sight of the Queen makes her hastily return these. It is a simple but effective way of revealing how Anna’s power is slipping, and how everyone is sensitive to the fact. When the courtiers return from a hunt, they huddle around a barbecue rather than a spit, and as Enrico meets the previously exiled Percy, one of them dons a deer headdress as everyone moves around her to play out a hunt. Although this scenario ends happily enough as the woman removes her accessory again, one feels the connection between the deer and Anna in being respected and revered in some ways, and yet also hunted and ultimately driven to death.

Two sets of three swords stand at either side of the stage, highlighting the ever present threat to both Anna and others, and serving as props so that when Percy tries to commit suicide and Smeton confronts him they both grab the shortest of these. The production is also strong on symbolism so that when the chorus ask Enrico to reflect on his judgment, they hold up mirrors. Not only are they telling him to take a look at himself, but the objects highlight the smoke and mirrors that underpin the entire plot.

In spite of all this, Act I seems far more dramatic than it does emotional, and there are few scenes in which we really feel the tragedy of the characters for ourselves. All this, however, changes after the interval when everyone seems to hit stride with their acting just as much as their singing. First among equals is Linda Richardson in the title role as the technical prowess she demonstrates underlies her ability to make her soprano sound electric as it conveys all of the Queen’s anxiety and emotion. Caryl Hughes as Giovanna provides a strong counterbalance by revealing a voice that tempers fullness with a large degree of sensitivity.

Jung Soo Yun as Percy reveals a brilliantly expansive tenor that scales quite exceptional heights and creates an enormous visceral thrill, while another notable performance comes from Matthew Buswell as Rochefort whose bass-baritone is rich, smooth and secure. He also stood out in the relatively small role of Seneca in L’incoronazione di Poppea here last year, and it would be good to hear a lot more of him. The well established Lukas Jakobski is a class act as Enrico, Carolyn Dobbin presents a highly polished performance in the role of Smeton while Alex Haigh provides effective support as Hervey. By the time we have added in Jeremy Silver’s excellent conducting, whose underlying sense of balance serves both the most sensitive and charged moments well, we have an Anna Bolena of which Longborough can rightfully feel proud.

Longborough Festival Opera’s 2019 season continues until 3 August. For details of all events and to book tickets visit the designated website.