A show that reminds us live theatre is really back, and just how good it can be. 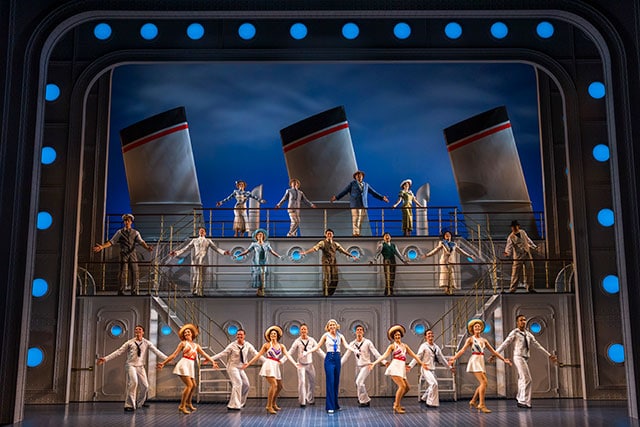 Although it is far from unknown for the Barbican to stage a musical in its theatre during the summer, few can have been as eagerly anticipated as Cole Porter’s Anything Goes. This is because it is the first piece of live performance at the Barbican since before lockdown began that will enjoy a run of several months. If excitement had been at fever pitch in advance of the event, the show does not disappoint as it is executed to perfection while being genuinely funny along the way.

Numerous versions of the 1934 show abound, and this current offering, directed and choreographed by Kathleen Marshall, is based on the Roundabout Theatre Company’s 2011 revival of the 1987 Broadway rewrite, which originally opened at New York’s Stephen Sondheim Theatre. With practically the entire show taking place on the SS American, Derek McLane’s gleaming white set depicting a portion of the ocean liner looks gorgeous. It actually restricts the overall size of the Barbican’s stage, but with staircases leading to different decks, there are three performance levels, allowing for mass movement to occur from the top to the bottom of the stage.

The musical credentials are excellent, with the superb balance and sharp rhythmic awareness displayed by the fifteen-strong orchestra, under the baton of Stephen Ridley, proving to be the foundation on which these toe-tapping tunes can be heard in all their glory. No song or dance is performed to anything less than a model standard, but things really take off in such numbers as the title song, where the extended tap routine just keeps going higher and higher. The cast are all stellar in their own fields, but it is noticeable that as the routine gets increasingly complex the majority of principals exit the stage to leave the hardest moves to the well-drilled chorus. The notable exception is Sutton Foster as Reno Sweeney, who leads the song from start to finish, and repeats the magic in the second half with ‘Blow, Gabriel, Blow’. This proves to be the type of all-singing, all-dancing extravaganza that we just don’t want to end, and we very nearly get our wish as it continues at length, while constantly being raised to new heights. 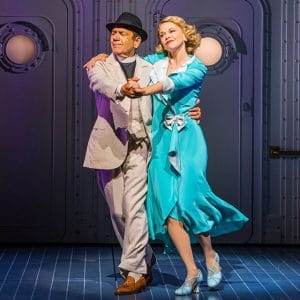 Just as enjoyable as the large musical numbers are the ‘set pieces’ that, thanks to the quality of the acting, lift the potentially corny to the realms of the poetic. For example, Moonface Martin’s swiping of Elisha Whitney’s glasses is a routine grounded, in essence, in Vaudeville, but so strong is Robert Lindsay’s timing that it lifts the gag to a new level. As a performer in this genre, Lindsay proves special, and ‘Be Like the Bluebird’ is performed impeccably as the bird is represented by a blue light that ‘rests’ in his top hat and then ‘flies’ around the stage and auditorium.

“If excitement had been at fever pitch in advance of the event, the show does not disappoint…”

One of the undoubted highlights of the evening is Lindsay and Foster’s performance of ‘Friendship’. Part of Foster’s brilliance is to be so at ease in the part that she frequently breaks the fourth wall in the best possible way. Even at the start of the song she gives a glance to Lindsay that says “we’re ready to put on a top number here” that belongs as much to her as her character, but even such gestures are controlled enough to mean they could pass for either. As the song continues, and the pair end up fighting for the spotlight, they really do break the fourth wall by bantering with the conductor and each other on their way to rounding off the piece in style.

Gary Wilmot is a splendid Elisha Whitney, while Felicity Kendal puts in the best type of hyperbolic performance as Evangeline Harcourt, especially when she loses her dog Cheeky and thinks the ship is sinking. Against such experienced actors, however, the younger Samuel Edwards more than holds his own in the main role of Billy Crocker. He proves a very talented all-rounder who understands how to make Billy’s sometimes cruel tricks part of an ultimately likeable and sympathetic character. Nicole-Lily Baisden is a highly persuasive Hope Harcourt who sings ‘Goodbye, Little Dream, Goodbye’ beautifully, while Carly Mercedes Dyer really goes to town portraying the ‘man eater’ Erma. Perhaps the most purely delightful performance, however, comes from Haydn Oakley as Lord Evelyn Oakleigh, who plays the ‘English upper class twit’ with such charm and innocence that every line he utters is a joy to hear long before he is caught swinging across the stage in ‘The Gypsy in Me’.

When we consider the beautiful Art Deco designs of the wheeled on cabins alongside the comical seagulls flying overhead, this is a production that oozes both quality and fun. After the lockdown we have had it is just the show to bring us back to life, so all aboard and enjoy the trip!

Anything Goes continues at the Barbican until 31 October 2021. For further details and tickets visit the designated website.