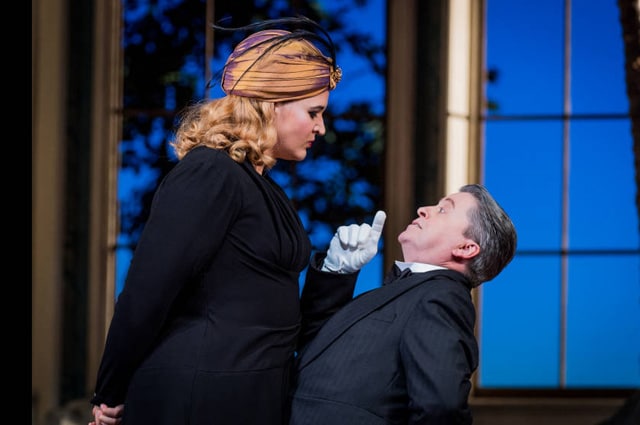 For all of its obvious humour, Ariadne auf Naxos is an extremely profound work. Theatrically it breaks the fourth wall, constitutes (at least in part) a show about putting on a show, and makes self-conscious jokes about mixing high and low culture. Musically, the genius lies in successfully blending such disparate styles into a coherent and substantial whole, while thematically it is about the role of art in society, the question of whether compromise in artistic endeavour is ever desirable or permissible, and how transfiguration can occur in the context of embracing life rather than death.

Given the abundance of riches to be found in the piece, it needs to be played relatively straight, at least on its own terms, to bring them all out. Any production ultimately constitutes an interpretation of a work, but in the case of Glyndebourne Festival Opera’s 2013 version, now enjoying its first revival, it feels as if director Katharina Thoma adds too many additional layers with the result that they tend to undermine rather than illuminate the original piece.

Thoma sets the action in 1940 in an English manor house. This initially seems to be a perfect fit for Glyndebourne because in the Opera proper we as the audience could be the Master’s guests, gathering for the entertainment that was planned out during the Prologue. It may also be no coincidence that the bay window in Julia Müer’s set does not seem dissimilar to the one to be found in the Organ Room. However, Thoma also makes reference to the Second World War to reveal a time when, amidst all of its horrors, artistic endeavour might be deemed to be a relatively trivial issue. In other words, it sees the Composer, who was inclined to be self-centred as he saw the perfection of his creation as the only thing that mattered, having to confront and take on board a wider and extremely cruel world.

Wagner’s Die Meistersinger von Nürnberg argues for putting art and the artist at the centre of society. Ariadne auf Naxos may not make the point so vehemently, but it is still arguing in the same direction. As a result, it seems odd for this production, by emphasising the relative importance of matters outside of the artistic realm, to make the opposite case to that of the original work. The difficulties that arise out of this are as much practical as theoretical. Here the Opera proper is staged several weeks from the time of the Prologue after the house has started to be used as a wartime hospital. This makes a mockery of the idea of the Composer having to rush through his unpalatable changes to ensure that the Master gets his desired entertainment that evening, and it is especially disappointing since Glyndebourne has the potential to make the original set-up feel as authentic as it ever could. The Music Master proclaims that they need another two hours to prepare, and that is virtually what the long picnic interval provides. 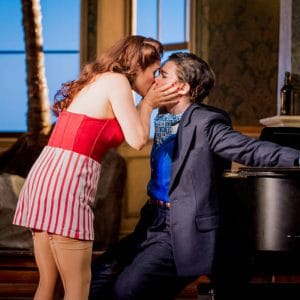 In the Opera the manor house has been converted into a hospital with Naiad, Dryad and Echo becoming nurses who tend wounded and shell-shocked soldiers. The difficulty is that this extra layer of activity on top of the original plot proves very distracting, and might make those unfamiliar with the work struggle to grasp what is happening. This is because it could be hard to ascertain which parts of the action constitute the original story, and which the additional commentary that is being applied here.

In this version the Composer actually appears in the Opera, observing his drama and sometimes intervening in the action as he actually prevents Ariadne from committing suicide. This also seems to take things too far because it is surely important that only the Prologue overtly breaks the fourth wall. The Opera itself, although being a product of the Prologue and showing its innovation through the mixing of themes and musical styles, is, on its own terms at least, played straight down the board as a piece of drama. Nevertheless, as we watch the Composer’s various expressions of hope and despair as he reacts to what he sees, it does feel as if he is going on his own journey of discovery, and his final look of contentment as he sees Bacchus and Ariadne come together and embrace life is quite moving. One senses that the introduction of the Composer to the Opera could have worked well had it been the sole innovation in a production that otherwise paid total respect to Strauss and von Hofmannsthal’s original intentions.

Beginning with the performance of the London Philharmonic Orchestra under the baton of Cornelius Meister, the evening’s musical credentials are far stronger, and the soloists prove engaging both as singers and actors. Lise Davidsen is brilliant in the title role, since she oozes presence. Her magnificent soprano is seemingly capable of scaling any heights and while her voice can reveal immense power, accuracy and resolve, she still frequently gives the impression of producing the most sensitive, sorrowful sound imaginable. In this production Ariadne has been admitted to the hospital, presumably to help with her depression, while Bacchus is a fighter pilot. As the latter, AJ Glueckert is a strong presence who produces a robust and frequently compelling sound. Angela Brower is a splendid Composer, constantly reacting to everything that goes on around her in both the Prologue and the Opera, while Erin Morley is a spirited Zerbinetta who displays some beautiful coloratura in ‘So war es mit Pagliazzo’.

Hyesang Park, Avery Amereau and Ruzan Mantashyan produce extremely tender sounds as Naiad, Dryad and Echo respectively and their voices blend exceptionally well with each other and with Davidsen’s own. Bjorn Bürger, François Piolino, Daniel Mirosław and Manuel Günther are similarly strong as the Players, with Bürger as Harlequin standing out in particular. Their dance routines are humorous and entertaining although one senses that if they had been given something just a little more ambitious to execute they would have risen to the challenge. The Prologue also features some good performances, especially from Nicholas Folwell as the Major-Domo and Sir Thomas Allen, who is an old hand at playing the Music Master.

There is much to enjoy in this Ariadne auf Naxos, but it is still an evening that prevails despite, rather than because of, the staging. There are many moving moments, but one cannot help feeling that a different approach might have elicited even more. It may ultimately be telling that the final scene in which Ariadne comes together with Bacchus is indisputably powerful, and yet also represents the one point at which everything is played fairly straight and relatively free from distraction.

The original 2013 production, featuring Soile Isokoski as Ariadne, Sergey Skorokhodov as Bacchus and Kate Lindsey as the Composer, is available on DVD and Blu-Ray on the Opus Arte label.