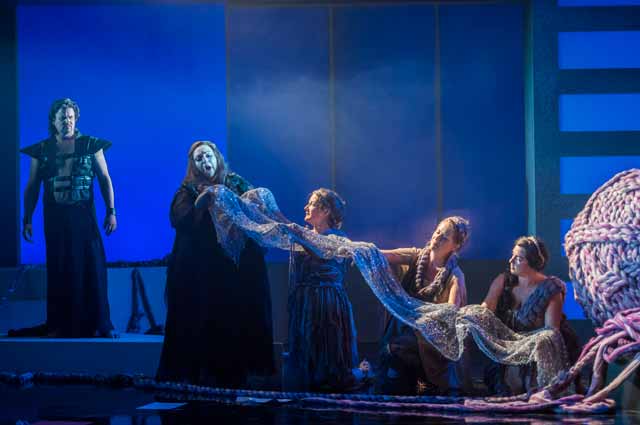 The Knight of the Burning Pestle broke the fourth wall, Die Meistersinger von Nürnberg put musical convention and taste under the spotlight, and White Christmas was a musical about putting on a musical. There are touches of all of these elements in Richard Strauss’ Ariadne auf Naxos, and it is a tribute to the composer’s genius that he could so boldly explore the competition between high and low art, while simultaneously producing a piece that is so beautifully rounded, not to mention musically wondrous, in its own right.

Although challenging to perform, the work is always a good choice for summer opera festivals as its sheer quality is complemented by a huge dose of fun. It almost feels as if we are The Master’s guests, sitting down after we have dined to enjoy the Opera that we saw planned out during the Prologue.

Director Alan Privett, who was responsible for Longborough’s Ring Cycle in 2013 and Tannhäuser in 2016, produces a straightforward yet dynamic staging, which is exactly what is required. Faye Bradley’s set for the Prologue, which represents a modern open plan ‘reception area’, does not so much stamp a clear concept on the evening as provide a space that is conducive to letting the shenanigans unfold. In this way, the introduction of steps, and the fact that The Prima Donna and Tenor’s dressing rooms stand on different levels, are important to the set-up.

The Players running on from the auditorium, and the inclusion of the people who are then to play Naiad, Dryad and Echo as silent characters in the Prologue, all aid the dynamism. The presence of a classical bust with a luminous loom band covering its eyes also says something about the clash of values, and the closing image of the four Players posing for a selfie in front of it as The Composer crumbles in despair is hilarious.

In the Prologue Darren Jeffery is extremely strong as The Music Master, while Harry Nicholl gives a highly engaging performance as The Dance Master. Anthony Wise, appearing vaguely Warhol-esque as The Major-Domo, is suitably condescending and business-like as if the character enjoys the small amount of power that his job gives him. The fact that he delivers the spoken words in English, while everything is sung in German, also gives them a greater immediacy. 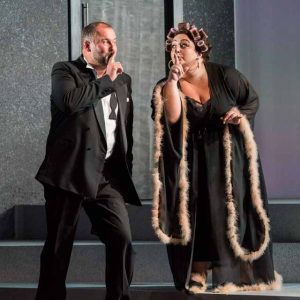 The highest accolades in the Prologue, however, go to Clare Presland as The Composer, whose extremely powerful soprano has real edge at the top of the register and equally strong low notes. Her rapport with Zerbinetta is excellent as she warms to seeing things differently, but she also helps us to see The Composer as Ariadne before her transformation as at the end he says he just wants to curl up alone and freeze.

The same basic set is used for the Opera proper, but the act of bathing it in blue, purple and mauve light, courtesy of Ben Ormerod, gives it quite a different feel. The area now contains a huge ball of wool, which is clever for a number of reasons. It is the type of prop that might be found at short notice, tying in with the fact that, as the first half showed, this version of the Opera was put together quickly, and it links with the people who then play Naiad, Dryad and Echo knitting during the Prologue. As they spin and wrap the wool in various formations (the movement director is Michael Spenceley) they feel like Norns weaving the rope of destiny, with the cords also helping to delineate their own relationships as they use them to pull each other close.

The parts are sung superbly by Suzanne Fisher, Flora McIntosh and Alice Privett, with the contralto of McIntosh standing out in particular. The Players – Julien van Mellaerts as Harlequin, Aidan Coburn as Brighella, Richard Roberts as Scaramuccio and Timothy Dawkins as Truffaldino – are also well sung as their colourful costumes feel like commedia dell’arte meets Klaus Nomi (himself an opera singer by background) meets Village People! They are not given anything particularly imaginative to do for their routines, although Coburn is handed more than the others, but they carry everything off with panache.

The house’s space is also used well so that before the Opera proper begins, conductor Anthony Negus offers up The Composer, who is sitting in a box, to the audience as might really happen at the premiere of a work. Similarly, Zerbinetta declares her choice of Harlequin while standing with him in the side gallery, looking down on the three rejected suitors on the stage below.

However, the second half is really made by the performances of the three main protagonists. Robyn Allegra Parton does not put a foot wrong in Zerbinetta’s ‘So war es mit Pagliazzo’ as, sporting a pink wig, she throws herself completely into the role while maintaining a beautiful tone and displaying some wonderful coloratura. Helena Dix as Ariadne reveals a rich and sumptuous soprano that carries a spiritual air, entirely befitting her deep sorrow and desire to be taken to the realm of death. Her facial expressions are also priceless as when The Players try to cheer her up she looks genuinely bewildered. Jonathan Stoughton reveals a brilliantly expansive tenor that is capable of meeting the considerable demands presented by Bacchus’ soaring lines, which are ones that even the world’s leading heldentenors find they have to respect.

It is a slight shame that Ariadne and Bacchus spend almost all of their scene apart. It makes sense in terms of strictly following what happens when they meet, and allows her to join him at the end for their transfiguration by following a line of wool that has been ‘rerouted’ to show how her destiny has been altered. However, applying greater integrity to the staging could have aided interaction between the pair, which would have enhanced the sense of emotional connection. Nevertheless, with outstanding conducting by Anthony Negus, who is just as much a master interpreter of Richard Strauss as of Wagner, this is never less than a highly accomplished production that, in such an intimate setting, packs quite a punch.