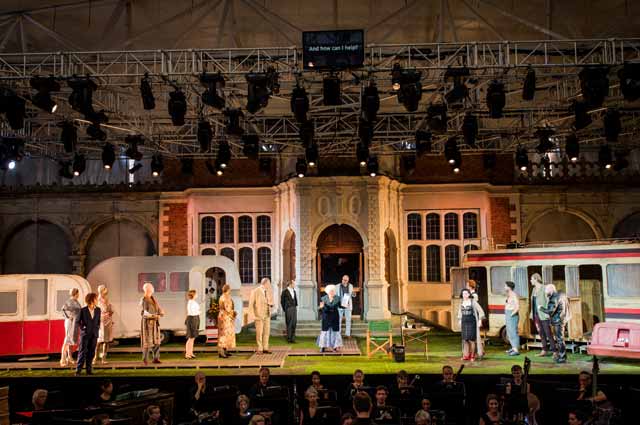 If there is one thing that recent productions of Ariadne auf Naxos have taught us it is that, when there is so much in the opera to begin with, it does not pay to be too clever with the concept. For example, Katharina Thoma’s 2013 production for Glyndebourne Festival Opera, which was revived last year, set the action during the Second World War when, amidst all of its horrors, musical endeavour might be deemed to be a relatively trivial issue. However, by emphasising the importance of matters outside of the artistic realm, the production ultimately made the opposite case to that of the original work. It also made for a confusing staging as one had to know the piece well to be able to distinguish between those plot points that were in the original story, and those that constituted the additional commentary being applied.

Longborough Festival Opera’s current production, on the other hand, sees Alan Privett not so much stamp a concept on the evening as introduce a space that is conducive to letting the shenanigans unfold, and it works a treat. Thankfully, Antony McDonald’s version for Opera Holland Park more closely allies with Privett’s general approach. It feels very different, however, because while Longborough’s converted cattle shed presents a small and enclosed space, Holland Park is larger and more open. McDonald’s production also benefits from introducing details that are entirely in keeping with what the original opera is saying, and thus help to illuminate many of its facets.

The set for the Prologue presents grass on which three caravans are parked, one each for the Tenor, The Prima Donna (hers slightly grander than the others) and The Players (which is the largest with four doors). This helps to provide a fluid staging as the performers can be present or absent in a second simply by emerging from, or disappearing into, their caravan. The Prologue is delivered in English, which creates a more intimate feel, and aids the humour because the strength of the comic timing hits us immediately. It also makes sense to do this while performing the Opera proper in German, because a company in the United Kingdom staging Die Meistersinger von Nürnberg could easily discuss everything as they prepared in English while still presenting the work in its original language.

This co-production with Scottish Opera first appeared at Glasgow’s Theatre Royal in March, but it works for the references that were clearly introduced for that setting to remain here. So The Master is reported to be ‘the richest man in Glasgow’, a kilt graces the stage and Eleanor Bron as The Major-Domo has a Scottish accent. Her role is actually renamed The Party Planner and she comes across like a housekeeper, having been used to sorting The Master’s affairs for decades with a no-nonsense approach and minimum of fuss.

The other interesting feature of the Prologue is the sheer extent to which The Composer (an outstanding Julia Sporsén) feels persuaded by Zerbinetta to the point where they become quite amorous. This raises an abundance of questions concerning how much The Composer himself is inside or outside a piece of drama, and how much Zerbinetta is being herself and espousing her own needs in the Opera proper when she is technically playing a character. In this production, the exploration of these ideas also carries a further twist right at the end of the evening. 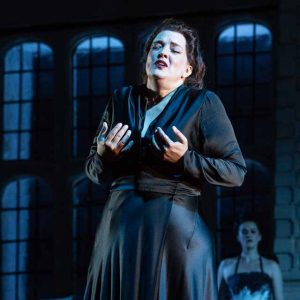 In the second half, the caravans are pushed to the sides and a stage placed in the central area. Upon it we see a wedding banquet that was clearly set up and then abandoned when Theseus deserted the island. Ariadne sits on a sofa, from which she then removes a sheet to reveal that it is actually a coffin. When The Players (Alex Otterburn as Harlequin, Daniel Norman as Scaramuccio, Lancelot Nomura as Truffaldino and Elgan Llŷr Thomas as Brighella) appear they remove four spades from it, jump in it and row as if it were a boat and the spades oars. This not only signals Bacchus’ subsequent means of arrival, but reveals how they attempt to change Ariadne’s destiny by commandeering objects that clearly had one purpose for another.

This is only one of many intelligent touches across the evening, but The Players’ routine also benefits from being genuinely amusing. It begins quietly enough with the four singing sitting down, either knitting, crocheting, reading a newspaper or a book on ‘Ancient Myths’. It is not long, however, before they are plate spinning or levitating their canes, all courtesy of circus skills director Joe Dieffenbacher.

The evening is conducted well by Brad Cohen, while Naiad, Dryad and Echo are superbly sung by Elizabeth Cragg, Laura Zigmantaite and Lucy Hall respectively. Their beautiful dresses are each made up of a different combination of black and white, and their stiff trains rise to depict the sails on Bacchus’ ship. There is, however, one error in judgment when Harlequin sings ‘Lieben, Hassen, Hoffen, Zagen’ while holding up cards with the individual words on. The divide between those moments that should and should not be overtly comical is quite obvious and, especially when the original direction is that he sing this section from the wings, the action cheapens what should still be a moving moment.

Jennifer France is a revelation as Zerbinetta, carrying off ‘So war es mit Pagliazzo’ with a glistening sound, excellent coloratura and real panache. She is very much made into the Burlesque performer as she sports a huge feather tail and has a swing descend for her to perch on. At the end of the aria, Harlequin slow claps her, and this is primarily because, as he says, none of Zerbinetta’s persuading will have any impact on Ariadne. However, it may also be because, based on what she has just sung, he realises how far from a forgone conclusion it is that she will decide in his favour. She subsequently does, of course, but the ending here reveals why he had every reason to have his doubts.

Mardi Byers is strong and engaging as Ariadne, but things are raised to another level when Kor-Jan Dusseljee’s Bacchus appears, leading to an exceptionally moving final scene. This Bacchus comes across not as a god, but as a human, and an old-fashioned, considerate gentleman at that. In this way, although it takes the whole of the final scene for Ariadne truly to understand who he is, we feel a warm sense of relief as soon as we spy him because, after all that Ariadne has been through, here finally is a kind and thoughtful man who will be good to her. Dusseljee’s voice does not instantly hit us as being particularly powerful, but it clearly is and his tenor’s strength actually lies in the way in which it sounds so smooth, rounded and seemingly effortless.

The ending is highly emotional because seeing the union of Bacchus and Ariadne being complemented by that of Zerbinetta and Harlequin, and of Naiad, Dryad and Echo with the three rejected Players, only adds to the beautiful feeling that all is right with the world. Nevertheless, this production also benefits from adding just a slight ‘sting in the tail’ to the very closing bars, as well as a flamboyant, but entirely appropriate, feature to the curtain call.

Opera Holland Park’s 2018 season continues until 28 July, and includes a free open day on 22 July. There will also be three nights of film screenings from Luna Cinema from 1 to 3 August. For further details of all events visit the Opera Holland Park website.