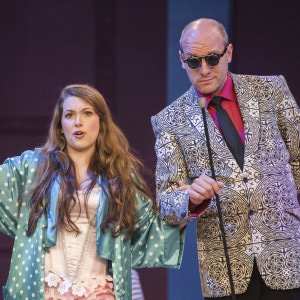 If Ariadne auf Naxos might initially seem to be an ambitious choice for West Green House Opera’s 2015 season, in the event it proved to be a highly appropriate one. This is because the opera works well in an intimate setting as significant sections focus on individuals and even the ensemble pieces are as much about detail as bravado. It also offers everything we might want from a summer’s evening in being highly emotional in some places and brilliantly comic in others.

One could go further and suggest that in the Opera proper the audience are the Master’s guests, sitting down for the entertainment that was planned out during the Prologue. It certainly feels appropriate that, with the two ‘acts’ coming either side of the long picnic interval, the light shines into the glass and steel opera house during the first half while the second is surrounded by a starlit sky.

Director Richard Studer utilises the same set as he employed for his production of The Marriage of Figaro a week earlier. This presents a classical interior, although in Ariadne the back wall is now mauve while the rest of the set remains blue. At the centre lies a sloping platform that offers an additional level, and focuses the eye towards key actions by having them occur upon it.

There is a reasonable dynamic to the Prologue as each of the multitudinous figures marks out their character through their entrances, exits, gestures and asides. The act can, however, be a little confusing as so much happens in it, and a few factors here reduce the overall level of clarity. Chief amongst these is that enunciation is sometimes weak (the performance utilises Christopher Cowell’s English translation with no surtitles) meaning that those who do not already know the opera could miss out on many points.

Against this, however, there are some superb vocal performances, not least from Rosie Aldridge as The Composer. If her lower register sometimes feels underpowered, on many other occasions it has a wholesome strength, and as the act progresses her voice opens out. The rest of the cast are also superb with Wyn Pencarreg’s Music Master standing out in particular.

The second half rises to another level as the staging enables individuals to engage with us on a very personal level. The ensemble pieces also work better because they need to be intimate and controlled although there are two (related) weaknesses. The dancing of the players (Damian Thantrey, Sion Goronwy, Anthony Flaum and Nicholas Sharratt) is a little prosaic, and although it is deliberate that each applies a slightly different style to their movement, the routines could be sharper and more imaginative.

Similarly, having the nymphs (Kristy Swift, Caroline Backhouse and Charmian Bedford) spend so much time simply perched aloft three stepladders seems like a waste when Truffaldino, Scaramuccio and Brighella could be interacting with Naiad, Dryad and Echo as proxies for Bacchus’ later encounter with Ariadne.

The singing  stands out with three performances proving overwhelming. Nicola Said as Zerbinetta is possessed of a clear but agile soprano, with her various high and low notes here proving to be responses to the tactile advances of the players. Rebecca Nash could hardly be bettered as Ariadne, as there is a beautiful maturity and vibrancy to her sound, while the tenor of Jonathan Stoughton as Bacchus is equally assertive and affecting. There is a boldness to their gestures that is quite deliberate since these are characters who indulge in their emotions, and their final ascent to the heavens is suitably dramatic, even though it only entails climbing a few steps decorated with lights.

Jonathan Lyness offers highly sensitive and insightful conducting of Strauss’ enigmatic score, and the consequence is that sections of the second half feel just as stirring and accomplished as anything to be found in the major opera houses of the world.