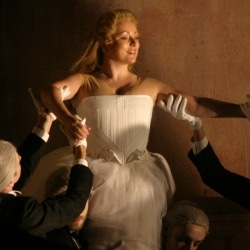 In his famous book Opera and Drama, the critic and musicologist Joseph Kerman wrote that Handel’s operas could never get away from sounding enervated.

Without doubt he should hasten to English National Opera, where the latest revival of Ariodante puts sensuality right at the heart of the opera, making for four hours of uninterrupted musical bliss.

The performance had a magical aura about it, leaving the audience spellbound by the extraordinary vocal talents of a cast that was totally committed to the project at hand.

David Alden‘s production is a work of genius, full of clever references to the style of staging found in Handel’s times. Rather than disguise scene changes, the baroque theatre made a celebration of the workings of theatrical production. Alden brings this to life with his designer, Ian MacNeil, by creating a backdrop with an opening which represents a theatre, complete with its own footlights. The story is carried out both in front of and inside this space, while in the final act, stage hands manipulate raised reflective panels to allow an easy flow from location to location. And an amusing tribute to the ‘wave machines’ of the period set the stage for the third act.

Ariodante was written in 1734, a good ten years after the more popular Giulio Cesare. In the face of declining popularity for the form, the composer decided to continue writing opera serie, and Ariodante is no less extraordinary than the earlier, more famous works. Set in Scotland, the opera tells of the daughter of the King, Ginevra, who is in love with a newly-arrived foreign knight called Ariodante. Polinesso, the duke, had been courting Ginevra, and tries to thwart the match, but the duke is eventually killed by Ariodante’s brother Lurcanio, and the lovers are reunited. In addition, Lurcanio is united with Dalinda, Ginevra’s lady-in-waiting, who was briefly the unwitting accomplice of the evil Polinesso.

ENO has gathered an ideal and committed ensemble of performers, nearly all of whom are required to sing in difficult positions such as lying upside down. Christopher Moulds energised the orchestra to their very best attack; noone performs Handel quite like ENO. The continuo group, consisting of Moulds, David Newby (baroque cello) and Dai Miller (theorbo), provided a sharp and sympathetic accompaniment in the recitatives, and the brass were notably good in their obbligato passages in the aria Set the loud trumpet sounding.

In the title role, Alice Coote warmed up to a well-rounded portrayal of a complex character. The opera really came to life when she sang Take Your Pleasure, which was full of emotional heartbreak and a luscious tone. Perhaps even a shade more impressive was Rebecca Evans‘ beautiful Ginevra. She has a fabulous creamy tone, with a wide range of expression, and her energy and psychological intensity were key facets of a memorable performance.

One of the most striking contributions came from ENO Young Singer Sarah Tynan as Dalinda. Aside from a slightly unfocused aria at the start of Act 2, she showed a very clear and pure tone throughout the rest of the opera. Patricia Bardon was a fiery Polinesso, producing some remarkable full sounds in the lower tessitura.

Peter Rose was a solid King of Scotland; the tenor Paul Nilon had an expressive and unforced coloratura; and Nicholas Watts made a brief but serviceable appearance as Odoardo.

In short, this Ariodante mixes an engaging production with a strong musical performance. Grab this chance to see ENO in its core repertoire while you can.