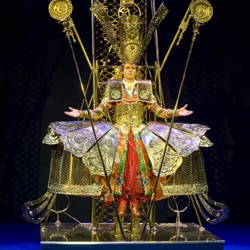 If you like Handel opera, but get bored with those convoluted Italian-language plots, then you’ll love Thomas Arne’s Artaxerxes. With great tunes, superb singing, fantastic costumes and a relatively simple storyline sung entirely in English, this production of Arne’s 1762 masterpiece can do no wrong. Although the opera hasn’t been revived since 1843, Artaxerxes was once a staple of the Covent Garden repertoire.

It was premiered at the Theatre Royal, the predecessor of the Royal Opera House, and had been performed more than 100 times by 1790. Both the young Mozart and Haydn very likely saw Artaxerxes staged during their visits to London. But the destruction of the original manuscript and performance materials during a fire at the theatre in 1808 discouraged further revivals, and the opera lapsed into obscurity.

Anticipating the tercentenary of Arne’s birth next year, conductor Ian Page has put together a new performing edition of Artaxerxes, complete with missing recitatives and a newly composed finale by Duncan Druce. The resulting production, directed by Martin Duncan with designs by Johan Engels, is an absolute gem.

The opulent costumes are a cross between Seven Samurai and Star Wars, with a strong dash of Baroque high camp. The singers’ exaggerated and static poses recall the elegant artificiality of mid-eighteenth century operatic practice, but also allude to the gigantic stone reliefs that adorned the palaces of ancient Persia, where the opera is set.

The singing is spot on. Caitlin Hulcup plays a very convincing male role as the long-suffering but ultimately vindicated Arbaces. Her voice has the strength and stamina to carry forward the more dramatic passages, but enough sensitivity to evoke real feeling in the gentler arias. She is matched by two equally powerful voices in the shape of Elizabeth Watts as Arbaces’s lover Mandane, and Rebecca Bottone as his sister Semira. Their duet lamenting Arbaces’s fate in the middle of Act III is equal to anything Handel ever wrote, while Mandane’s show-stopping aria, The soldier, tir’d of wars alarms’ is one of the opera’s highlights.

The smaller roles are also well filled. Counter-tenor Christopher Ainslie makes a sympathetic and likeable Artaxerxes, the Persian prince who ascends the throne following the murder of his father and brother by the scheming general Artabanes, Arbaces’s father. Tenor Andrew Staples relishes the grit and aggression in this role, but he is also capable of tender moments, such as the guilt-ridden lament for his son’s fate, after he is wrongly accused of the royal murders in Act II. It is perhaps worth remembering that John Beard, Handel’s star tenor in many of his operas and oratorios, sang this role in the 1762 premiere.

Ian Page directs the forces with warmth and precision. Admittedly, some of Arne’s music, especially in the first half, does not always match that of his great operatic predecessor Handel, nor that of his contemporaries, such as Gluck. Occasionally, the orchestration comes across as a little thin, and some of the arias sound suspiciously like English airs dressed up as grand opera. But from Act II onwards the music builds up in weight and momentum, and Duncan Druce’s reconstruction of the finale, as Artaxerxes ascends a resplendent peacock throne, is triumphant.