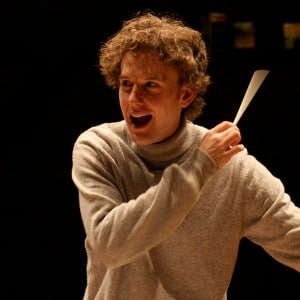 If Wagner’s operas are as much about drama as music, the same was certainly true of this evening from the Aurora Orchestra, which, alongside a performance of the Siegfried Idyll, told the story of the circumstances that led to its creation. This was done by presenting Barry Millington’s new play, The Gift, in which Henry Goodman played Richard and Harriet Walter Cosima.

So famous is the story of how the latter awoke on the Christmas morning of 1870 to hear fifteen musicians on the stairs giving the inaugural performance of the (originally titled) Tribschen Idyll, that any Wagner fan must at some point have tried to picture the scene. Millington’s drama, however, frames this iconic moment by recalling the entire history of the couple’s relationship. In a series of short alternating speeches Richard and Cosima look back on events that have already occurred, although the number of times that they quote from their own writings sees many individual lines use the present tense, thus handing the work a sense of immediacy.

In writing the play, one of Millington’s aims was to refute the notion that Wagner was simply a stereotypical wife-stealer. In reality, although the decision may have been made by Richard and Cosima, it was ratified by her husband Hans von Bülow who saw Wagner as the greater man in every way. On its own, this might only seem like a minor revision, but it is just one of many that Millington makes with regards to the popular image of Wagner as arrogant, expectant and aloof. Millington never suggests that such traits were not there, but he presents a more rounded portrait of the composer in which others are just as apparent. Wagner explains how when his first wife Minna intercepted a letter that he wrote to Mathilde Wesendonck and became outraged, she failed to appreciate that the words were actually those of resignation. Similarly, though he felt some attraction towards Cosima from the start, it cannot be said that he pursued her with single-mindedness from day one. Indeed, the turning point came over a seemingly trivial incident when he invited her to take a ride in a wheelbarrow, and was struck by her willingness to agree to do so.

Goodman’s portrayal of Wagner felt perfectly in tune with Millington’s intentions. Certain lines (such as his advice to Cosima ‘it would be easier to die for me than to live with me’) and asides were delivered so skilfully that they revealed Wagner’s arrogance and wit in equal measure. Overall, however, Goodman presented a more human, kindly Wagner than we might have imagined, but which upon witnessing felt highly believable. It stands to reason that the composer was a charismatic man, capable of great charm and affability, and contrary to the idea that these only masked deeper, more determined intentions, that is no reason not to count them as characteristics in their own right. While Harriet Walter was not faced with the task of portraying a genius, she did need to convey the complex emotions of a woman who was in love with one, and her performance was every bit as accomplished as Goodman’s.

The interval was preceded by the Aurora Orchestra’s performance of the Siegfried Idyll utilising thirteen players (as is normal today with no doubling on some string parts as in the original). Wagner described how the conductor Hans Richter had learnt the trumpet especially for the occasion and how he himself had conducted. Goodman then raised his baton to be replaced at the last possible moment at the podium by Nicholas Collon. The performance itself was characterised by a tenderness that meant that crescendos, while delivered with sufficient power, possessed the same level of beauty, integrity and restraint as the rest of the piece.

The second half focused on Richard and Cosima’s relationship as it settled down during the Tribschen years, and showed that while tensions and difficulties were far from insignificant, their relationship was fundamentally based upon mutual love. In describing the routine of their days as much as the highlights there was also room to introduce much humour. When Nietzsche came to visit them, alongside the deep philosophical discussions that he held with Richard he also helped Cosima to gild nuts for the Christmas tree, while the Wagners named two peacocks that they owned Wotan and Fricka.

The evening ended with Richard recalling how on that Christmas Day, alongside several reprises of the Idyll, the assembled orchestra also played Beethoven’s Septet in E flat, Op. 20, a piece that he felt was as much of a masterpiece as the Choral Symphony. Cue thirty more minutes of bliss from the Aurora Orchestra to round off an exceptional and thought provoking evening of music and drama.

For details of all events in the eight month long Wagner 200 festival click here.

Further details of Kings Place concerts can be found at kingsplace.co.uk