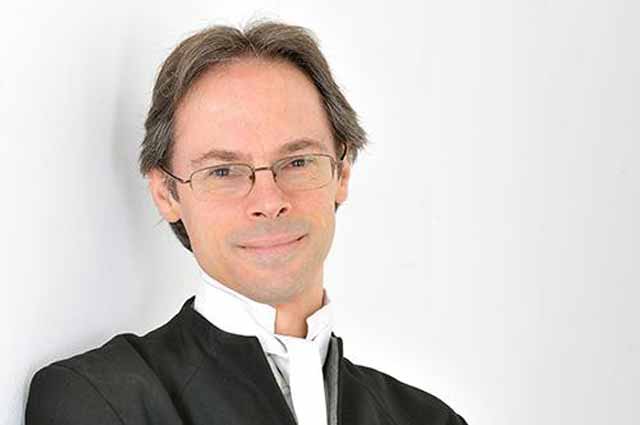 The Tilford Bach Society is a busy and well-funded organisation that sponsors regular, historically informed performances of the music of Bach and his contemporaries in the Surrey village. Each June, they bring the high-point concert of their annual Festival to St John’s Smith Square, and this year’s offering was an excellent performance of Bach’s Mass in B minor by The London Handel Orchestra, with ten hand-picked singers.

As remarked in a 2015 review of their St Matthew Passion, the director, Adrian Butterfield, displays a complete immersion in the idiom, and coaxes all of the period nuances out of the singers and players. The contrasts in tempo were all in evidence: the solidly austere stile-antico-influenced material (such as the opening ‘Kyrie’ and the ‘Confiteor’ movement of the Creed) set against the light, rapid, dance-like movements that include the glitteringly trumpeted ‘Et resurrexit’ and the soufflé-light ‘Domine Deus’. The movements, including obbligato wind instruments, were presented as delightful vignettes that included some impressively agile work from the bassoons in ‘Quoniam’ (albeit that the natural horn eschewed some of the decoration normally heard in this movement), delicate fluttering from the two flutes accompanying a solo quartet of voices for ‘Qui tollis’, and the gentlest of violin arpeggios over the soft throb of strings for the ‘Et incarnatus’ quintet. The big set-pieces were magnificent, again displaying Butterfield’s understanding of the use of dynamic and tempo (and the performers’ on-point response to his direction) to highlight the drama; particularly special were the ‘pecking’ passages for oboes and trumpets in ‘Sanctus’, contrasting well with the broader themes. ‘Cum sancto spiritu’ was given splendid attack, and ‘Confiteor’ had a nicely judged bounce to it. Congratulations must also be extended to the two basses, as their ‘wall-of-death’ entry (‘Et iterum’ in ‘Et resurrexit’) was absolutely together, with not a note out of place!

The only small criticism of the ensemble pieces was that perhaps the singers might have been brought more to the fore spatially, instead of being placed behind the orchestra. Given the instrumental forces, this one-to-a-part B-minor needed to allow the singers to gain the upper hand. The solo movements were fine (as they were mostly continuo and solo wind instrument), as were the homophonic full-chorus sections. Some of the staggered-entry sections for full choir, though (such as the alto entry at the opening of the Gloria) were a little swamped.

The singers themselves were universally good, with some outstanding performances. Edward Grint’s voice was perfect for ‘Quoniam’ – dark and solid with a hint of grainy edge; Alex Dobson, the other bass, gave us an equally impressive rendering of ‘Et in spiritum’, his voice just as solid, but with lighter resonances – oak to Grint’s mahogany. Ruby Hughes’ soprano has a glorious bell-like tone to it, and the semiquaver runs in ‘Laudamus te’ rolled out like peals of silvery laughter. Charles Daniels demonstrated his sure understanding of delivery and dynamic in the Benedictus, his voice blending superbly with the sensitively interpreted cello and flute obbligati. Helen Charlston, though, was the star of the show. Switching between alto and soprano in the choral numbers, she also displayed excellent blend in her duet (‘Christe eleison’) quartet (‘Crucifixus’) and quintet (‘Et incarnatus’). Like the best of desserts, her voice is creamy with a hint of sharp fruitiness, and it was with her solo ‘Agnus Dei’ towards the end of the musical feast, that she wowed the audience.