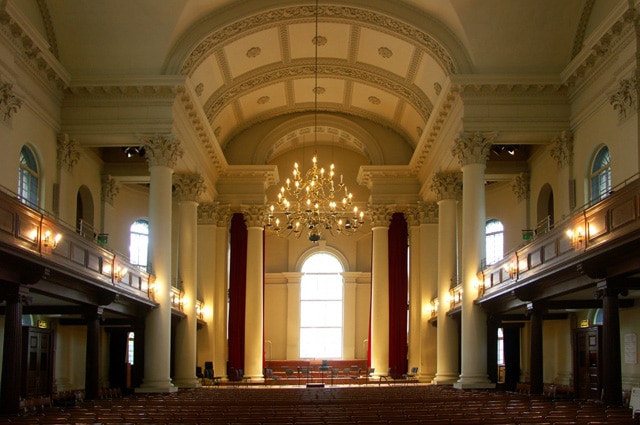 The English Civil War and Interregnum aside, Shakespeare has never been off the English or British menu since his own lifetime. This does not mean, however, that every generation focused particularly on the Bard’s own words, or that his appeal simply stopped at the English Channel. In this concert from Bampton Classical Opera, whose recent successes have included Salieri’s La grotta di Trofonio, Gluck’s Philémon et Baucis and Arne’s The Judgment of Paris, two rarities that illustrated different ways in which Shakespeare was explored through music in the eighteenth century were presented to mark the quatercentenary of his death.

Georg Anton Benda (1722-1795) was from the musical dynasty commonly known as ‘the Bach family of Bohemia’. His three-act ‘ernsthafte Oper’ (serious opera) Romeo und Julie (1776) illustrates just how Shakespeare’s plays could be altered to meet musical requirements and the tastes of the day. With libretto by Friedrich Wilhelm Gotter (1746-1797), the cast is reduced to four, and the dynastic feuds are put firmly in the background as the parts of Benvolio, Mercutio, Tybalt and Lady Capulet are cut altogether. Juliet’s nurse is assigned the name Laura and becomes less earthy and comical and more of a confidante, while the piece is given a happy ending when Juliet awakes before Romeo has taken the poison. Not only did such a conclusion appeal far more to eighteenth century sensibilities, but Gotter felt that the limited talents of the cast for which he was writing would not enable too sad and emotive an ending to be carried off. He also stated that ‘the musical economy seemed to me not to allow the retention of the all-too-tragic catastrophe’.

Bampton Classical Opera performed the full work in 2007, and here they presented excerpts. In the thirty minutes of music that was played one could hear traces of Purcell, Handel, Arne and Mozart (although it seems that the latter learnt much from Benda). The work never felt derivative, however, because one only ever detected the influences rather than obvious pastiches: nor did it seem incoherent, because each section stood predominantly in one style rather than representing a mixture. In the evening’s second piece, Thomas Linley the Younger’s Ode on the Spirits of Shakespeare (1776), virtually all of the above composers could be heard as well. Nevertheless, because the explorations and emphases were different, the second piece felt decidedly ‘English’ while the first possessed a more ‘European’ flavour.

Linley wrote the work at the age of twenty, dying two years later. It does not replicate any specific Shakespeare play but rather is a celebration of the Bard, exploring in particular the supernatural elements in his works. With the piece opening with the chorus addressing the ‘guardian of that sacred land / Where Avon’s wood-crown’d waters stray’, Part I introduces the Spirit of Avon and Fancy and explores Shakespeare’s youth ‘in old Arden’s inmost shade’. Part II sees the skies darken and a more foreboding atmosphere prevail, as thoughts of Macbeth are brought to mind and a Fearful Observer reflects on what has occurred. However, the day finally dawns once more and the work ends with the chorus calling on Fancy to ‘give another Shakespeare to our isle’.

Both pieces were performed in English with Gilly French and Jeremy Gray having translated the libretto for Romeo und Julie. The orchestra (Bampton Classical Players), conducted by French, included flute, oboes, bassoon, horns, trumpets, timpani and harpsichord alongside the strings, while the chorus (Cantandum) was equally strong. From among the soloists, Clare Lloyd-Griffiths revealed a beautiful soprano as Juliet and the Spirit of Avon, and Caroline Kennedy was equally impressive as Laura and Fancy. Richard Latham revealed a warm and secure baritone as Capulet and a Fearful Observer, having only replaced Nicholas Merryweather at the eleventh hour, while Thomas Herford was an effective Romeo and Mourner.

For details of all its forthcoming events visit the Bampton Classical Opera website.