The Barber of Seville @ Coliseum, London 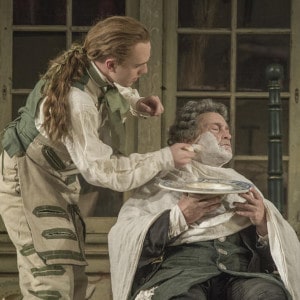 ‘These modern operas are so unfathomable. The story’s always feeble’ proclaims Doctor Bartolo. Rossini and his librettist, Cesare Sterbini, may have been making a joke against themselves, but today we are inclined to laugh for the reason that The Barber of Seville is two hundred years old. Such a line is representative of Amanda and Anthony Holden’s witty and perceptive translation, which proves to be an integral part of Jonathan Miller’s production for English National Opera, revived here by Peter Relton. It is a translation that follows the spirit of the original lines, even as it creates jokes that work well in their new tongue. Phrases such as ‘Give me a kiss curl, Help me find a girl’ roll thick and fast in arias, while lines such as ‘As long as I’m paid I couldn’t care tuppence’ are humorous because they carry just a slight sense of irony.

At the age of twenty-eight, Miller’s vintage production feels almost as much of a mainstay of the operatic repertoire as Rossini’s masterpiece itself, and its strength lies in its ability to provide an infrastructure that enables the characters to dominate the proceedings. In Tanya McCallin’s attractive designs we witness an ancient Sevillean street, complete with classical column and shrine, that could have stood for centuries before Rossini was even born, and yet might feasibly still be seen today. This then rolls back to reveal the interior of Doctor Bartolo’s house, stuffed with globes and anatomical models, which creates a smaller performance area and enables the characters to seem larger than life.

Although the cast may not be the best ever assembled for this Barber, the strength of the production lies in its attention to detail. As such, the generally strong line-up, coupled with a few outstanding performances, is enough to generate the requisite ensemble dynamic that brings the multitude of intelligent touches to the fore.

The standout performance comes from Andrew Shore as Doctor Bartolo, who combines a firm baritone voice with impeccable comic timing to create a perfect picture of puffed up pomposity. Encountering cramp at every turn, his performance of ‘A un dottor della mia sorte’ generates laughs in abundance as he traps his pince-nez in the piano lid and then struggles to set himself free. His main achievements in the part are twofold. First, while the opera and this production in particular are highly theatrical, he succeeds in convincing us that he really is a doddery, ageing man who struggles to find his place in the music as Rosina sings. Second, although he is the grotesque villain of the piece, he ensures that we cannot help but feel sorry for him as he takes one step after another towards his own destruction. The tragedy of Bartolo may be that, much as he can lock Rosina up and believe that he can outwit her, he surely knows that he can never make her love him. That is why in this production he looks so enraptured at the end when Rosina gives him a consolatory kiss. For the first time ever he has received genuine affection from her, and that is enough to make him happy.

Kathryn Rudge, with her fluttering eyelids and strong arm gestures, is a good Rosina. In ‘Una voce poco fal’ she tosses out coloratura with ease while conveying a strong sense of expectancy as we learn for ourselves just how easily her sweet and loving persona could disappear when she is crossed. Eleazar Rodriguez as Almaviva gives a convincing impression of one who only really comes to life when he is playing someone other than himself. This enables us to imagine that his basic character could be that of the ogre-like figure we see in The Marriage of Figaro, and to appreciate that Rosina has fallen in love with the image that she holds of him, rather than the real person.

Morgan Pearse, with his strong and nuanced baritone voice, is an outstanding Figaro. He engages well with the audience so that in ‘Largo al factotum’ everyone feels as if he is addressing them personally. He takes the idea of dynamic variation to extremes so that his quietest passages are virtually inaudible, and his generally strong enunciation sometimes goes off the boil, but overall he delivers a sublime performance.

Katherine Broderick is luxury casting as Berta, while Barnaby Rea is a splendid Don Basilio, positively indulging in the word ‘slander’ as shadows exaggerate his stature. He achieves the right balance between comedy and creepiness in his ode to calumny, although just as important to the execution of the aria are Shore’s silent reactions to Rea’s own dramatic gestures. In the pit, Christopher Allen delivers a fine account of Rossini’s bubbly score, bringing a lightness of touch that emphasises the humour and irony to be found within its notes.

The Barber of Seville will be broadcast live to selected cinemas in the UK and worldwide on 19 October. For details of participating venues visit the ENO Screen website.