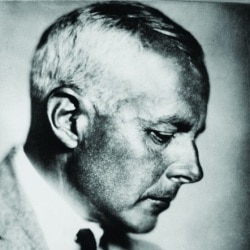 Saturday 3 June saw the first in a series of talks about Bartók, as part of a festival which is being put on by the Wigmore Hall to celebrate the Hungarian composer’s 125th birthday.

Professor Malcolm Gillies came from Australia especially to present the event, bringing with him his extensive rsum. He has written many books on Bartk and his current work in progress includes a biography on the composer for Oxford University Press.

He also wrote The New Grove Dictionary of Music’s entry on Bartók.

Gillies does not dress in the faded cords one expects from a dedicated musicologist. On first glance he seems to be a replica of a high-flying city business type. Which in one sense he is. Gillies is not only an academic and an educator, but a director as well. He is current deputy vice-chancellor at The Australian National University and Chair of the Australian Youth Orchestra and the Elision contemporary music ensemble, all of which makes him a seasoned public speaker.

So, impressive credentials aside, how did the content of his lectures measure up? The Study Afternoon was in two halves. The first half dealt with Bartók’s life, ‘first in pictures, then in words’ – ‘in pictures’ involved slides and ‘in words’ didn’t. The slides were supplemented with a lot of very interesting background information, about Bartók’s childhood, education and personality.

It was a varied and fascinating expos, which included everything from Bartók’s belief in Heliopathy to the difficult political situation he was forced to live in and particularly the composer’s confusion about his own political views. The talk also included musical examples, though not many. However, what the music lacked in quantity, it certainly made up for in quality. We were treated to recordings of performances by the composer himself for example.

By the time ‘in pictures’ had finished, my mind was swamped with a plethora of information which I had eagerly absorbed. Yet I wanted a break and it was with trepidation that I embarked on yet another run through of Bartók’s life, and this time with no pictures to illustrate the way. However, ‘in words’ was mercifully shorter than ‘in pictures’ and after an interesting, if perhaps unnecessary, recorded interview with Bartók, we were allowed some fortification.

After the break Gillies gave his view on what he called ‘the controversial issues’ of Bartók’s life. He began by giving a lesson on the formula (and its deviating factors) for writing a biography. Apparently the 2000-year-old recipe involves four sections: 1) Upbringing, 2) Personality, 3) Achievements and 4) Legacy (which poses a problem for autobiographies!). All this was a prcis to an interesting discussion on how the composer was thought of during his life and his subsequent place in our modern-day canon of twentieth-century composers.

The controversy came up when the composer’s politics began to be discussed. Gillies was not afraid to tackle less than flattering images of Bartók which included, amongst other things, comments referring to ‘too many Germans and Jews’. However, these comments were put into context and Gillies made it clear that they were just passing thoughts which came and went as the composer grew and matured through his life.

Gillies was brave enough to tackle some of the musicological dogmas concerning the composer, but stressed the importance of considering ‘the sum of his parts’ and not just focusing on any particular detail. This intelligent and rational approach avoided the trap that many musicologists fall into of arguing for argument’s sake. Whereas self-assured confidence like Gillies’ is undoubtedly in danger of being too easy to trust, his points appeared to be logical and well backed-up.

Saturday’s event was a two and a half hour Study Afternoon. A lot of information was packed in but it was well presented, with a clear and informal style.

The event the following day, however, took on a different format. It was a Lecture-Recital in tandem with the Belcea Quartet. As opposed to being in the more intimate Bechstein Room like the Study Afternoon, it was in the main hall and Gillies was given a podium and was amplified.

The change in atmosphere of the two settings clearly affected Gillies. Whereas the Bechstein Room made him comfortable and able to talk fluently, the main stage of the Wigmore seemed to make him lose his playful attitude so that his jocular comments appeared unnatural. This was only contrasted by the smiling, casually dressed Belcea Quartet.

The Lecture-Recital was still very polished and well presented. However, it was a shame that the sharp, articulate enthusiasm of the man was lost.

Initially it seemed strange to have a talk about Bartók’s String Quartets when the first half had already been performed (by the Belcea Quartet the night before). Yet the logic of Gillies’ decision became apparent through the talk, which concentrated on Bartók’s Quartets Nos. 4 to 6, as these include the composer’s more mature and unique musical personality.

The Lecture-recital highlighted some of Bartók’s compositional devices. This was done using only a level of music analysis that the layperson could understand, but at the same time was not condescending. However, it would have been more effective to use some technical terms. For example, saying that the music was ‘inverted’ as opposed to ‘The down bits go up and the up bits go down’.

There were three main parts to the talk. The first explained Bartók’s unusual way of using instruments, for example the different ways he employed pizzicato. The second thing he spoke about were rhythms, particularly Bartók’s method of adding and taking away half beats to give a more ‘honky-tonk and folksy feeling’. This involved the audience, who were delighted to get entangled in Bartk’s web of irregular rhythms whilst watching as the onstage contingency effortlessly joined in.

The final topic was concerned with the music’s texture. This was where things started to get more complicated and the lecture seemed to lose its focus somewhat. The analysis started to get more complex, and with all the extra words which were needed to avoid the technical terms, some focus was lost. A gratuitous reference to Brad Pitt’s facial symmetry seemed only to serve the purpose of drawing in the punters, for example.

All the above points were beautifully illustrated with help from the Belcea Quartet; it was a rare honour to see them playing individual excerpts.

It was also amusing to note how Gillies shamelessly used other famous composers like Mozart and Beethoven to ‘sell’ Bartók, a technique which he and his audience had shared a joke about the day before. Even if his enthusiasm led him to be a bit over ambitious with the amount he wanted to convey, (although he admirably made himself available for individual questions during and after both events), the overall content of Gillies’ talks were informative and entertaining. If it carries on as it began, the rest of the Wigmore Hall’s Bartók festival should prove to be of an equally high calibre.