by Barry Creasy
published: 14 May 2017 in Opera and Classical Reviews
Tweet 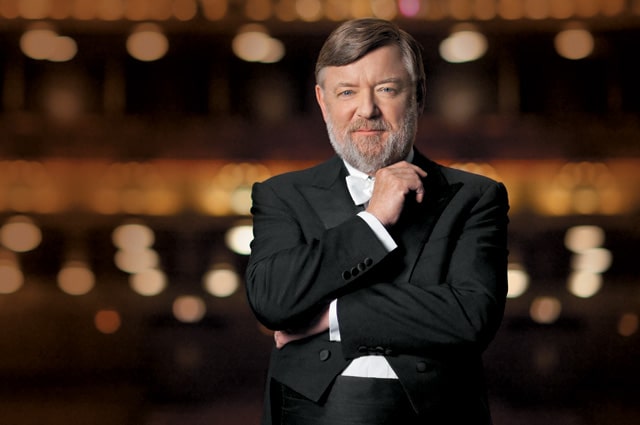 Sir Andrew Davis has a substantial catalogue of performances and recordings of British Romantic composers to his name, and his appearance with the BBC Symphony Orchestra (for whom he is Conductor Laureate) for a programme of Elgar and Bliss on Friday evening promised –and delivered – a perfect synergy.

Elgar’s Variations on an Original Theme (‘Enigma’) is a concert evergreen, and was given a textbook performance from the mellow opening, through the brassy rumbustiousness of the fourth and eleventh variations and the yearning cello ensemble of the twelfth variation to the dashing symphonic finale of ‘Edoo’. The orchestra was quite large (presumably prepped for the Bliss in the second half), so the louder moments were gloriously full, but Davis kept the dynamic under wraps when needed. Davis’ pause after ‘Nimrod’ seemed at first showy, but it was probably more to do with preventing the now sadly inevitable smattering of applause from interrupting the delicate ‘Dorabella’.

Arthur Bliss’ music, along with that of other less well known British Romantic composers (such as John Ireland or Ernest Moeran) is sadly under-represented in British concert programmes, and an outing of his rarely performed choral work The Beatitudes – written for the consecration of the new Coventry Cathedral in 1962 – was a special treat. Scored for orchestra, chorus and soprano and tenor soloists, it is a satisfying piece; Bliss’ flirtations with Modernism run throughout, and while its musical language is not far from the pastoral, the angularity of Bliss’ melodies, and the spikiness of his harmonic writing (for example in the tenth movement, an orchestral interlude) keep it from being too lush. There are some magical moments – the Beatitudes themselves (divided across five movements) are sung by the soloists, often accompanied by two harps and a chorus. These are interspersed with settings of poetry by the likes of Vaughan and Herbert and other scriptural quotations. The fourth movement – a syncopated setting of Herbert’s ‘Easter’ – is a shining piece of writing.

The orchestra was joined by the BBC Symphony Chorus, who also turned in an excellent performance – providing not only solid walls of sound (in the militaristic ‘The lofty looks of man shall be humbled’, or as the angry crowd in ‘Voices of the mob’ – their final ‘Kill!’ echoing Walton’s famous ‘Slain!’), but some radiantly pianissimo moments accompanying the soloists in their Beatitude statements. Alas, though, Bliss gives the chorus little in the way of contrapuntal material; much of what they sing consists of essentially homophonic – often chorale-like – movements, containing the occasional canon.

The two soloists – Emily Birsan and Ben Johnson – were well cast; Johnson’s voice has that lyric-tenor quality that is needed for English works of the period (although the odd rusty note), and Birsan’s sweet top register provided the notes of the pastoral lark. Their duet at the end of ‘Easter’ (brought to a close by a hushed chorus under a high violin) was especially lovely.

The orchestra throughout was excellent, and Davis’s control of speed and dynamic showcased his long experience of the idiom. One of the several downsides to The Barbican Hall, however, is its lack of a pipe organ – a startling omission for any decent concert hall. Extremely authentic-sounding digital instruments are available these days, but the Barbican still uses an elderly 1980s computer organ, with the result that the deep, sonorous organ chords that Bliss envisaged for the piece – and which add much to the mood of several movements – alas, sounded like the introduction of a star prize on a 1960s game-show.