Four seasons in 18th century Venice and 20th century Buenos Aires compared by the Academy of St Martin in the Fields and Joshua Bell at the BBC Proms. 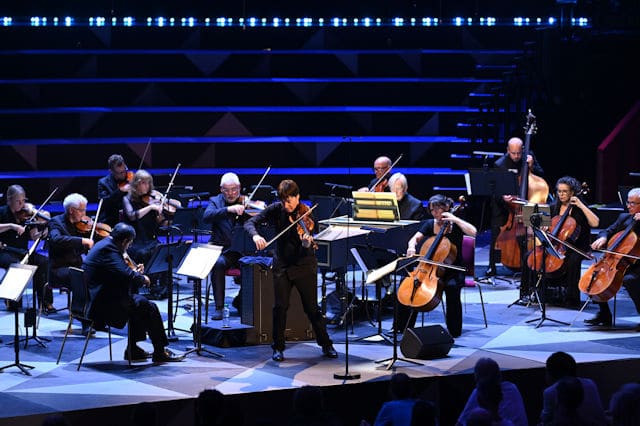 Astor Piazzolla’s Cuatro estaciones porteñas (‘Four Seasons of Buenos Aires’) were written over the period 1965–69, and were inspired by Quattro stagioni, Antonio Vivaldi’s more famous set of violin concerti from around 250 years earlier. They were written originally for violin / viola, piano, electric guitar double bass and bandoneón (accordion). The work was rescored for string ensemble (with a solo violin taking the bandoneón part) by Leonid Desyatnikov in 1999, clearly with a deliberate attempt (in terms of not only instrumental forces, but by the inclusion of musical quotes from Vivaldi’s material) for the two works to be performed together. Wednesday’s double Prom, then, saw just such a performance – with Vivaldi’s concerti interleaved with the corresponding movements of the Piazzolla – from The Academy of St Martin in the Fields directed, from the solo violin, by Joshua Bell.

The playing, as would be expected, was exemplary. Bell is a virtuoso player, and whether he was deploying the martelé and spiccato techniques of 18th century practice, or the more modern chopping techniques, the slides and double-stopping, or the use of the violin’s harmonics to produce the ‘traffic screeches’, required by the 20th century material, his playing was a joy to listen to. 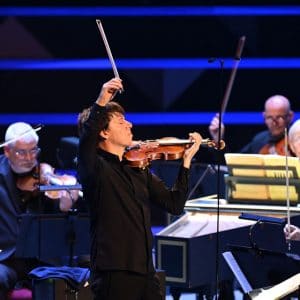 The orchestra, too, were on form, and produced some lovely dynamic contrasts in the Vivaldi (some very quiet playing in the slow movement of ‘Autumn’ was particularly noteworthy, as was the almost disharmonic metallic texture of the opening of Winter), as well as some enjoyable textured sounds in the Piazzolla. The slow strings tango of Autumn’s trio section was beautifully delivered, as were the jerky violin glissandi in Summer and the double-bass slaps throughout.

“The playing, as would be expected, was exemplary”

This all led to an appreciation of slick performance across the concert, but there was the feeling that the contrast between the works wasn’t really pointed up. Above all, the choice of ensemble and arrangement ended up with the sound-world being too polite. The programme note made play of this being a contrast between rural and urban, but this isn’t really the case. We must remember that Vivaldi’s rural imagery was artifice; it was a series of fantasy tropes about the bucolic countryside for wealthy Venetians to keep as an ideal – a fashion that saw its apogee in Marie Antoinette dressing as a shepherdess on her pretend farm at Versailles. These tropes need accentuating and, in modern times, need a certain amount of knowing humour rather than a smooth, anodyne recitation. Piazzolla’s pieces, while obviously a musical commentary, had their roots in a much more blood sweat and tears environment, and to sterilize this through an all-string arrangement (replacing that gnarly, ‘of the people’ sound of the accordion with a mannered violin) seemed somehow to pull its punch.

While Bell and the orchestra achieved a great deal in pointing up textures in each of the styles, the overall timbre (a relatively hefty string ensemble, albeit that there was some sectional work in the Vivaldi) remained the same, and both works ended up sounding somewhat bland. A more sensually provocative experience might have been achieved by separating the two works and maximising the textures of each, such that the comparison was more of century and style. A smaller, more pokey Baroque ensemble with plenty of variety in the continuo (instead of just a single harpsichord) for the Vivaldi, and the original scoring (there is still plenty of virtuoso violin work in this, even if the accordion takes a lion’s share of the solos) for the Piazzolla would have made for a much more exciting concert.

Academy of St Martin in the Fields MP3s or CDs

Academy of St Martin in the Fields on Spotify