A sacred work performed in an iconic hall. 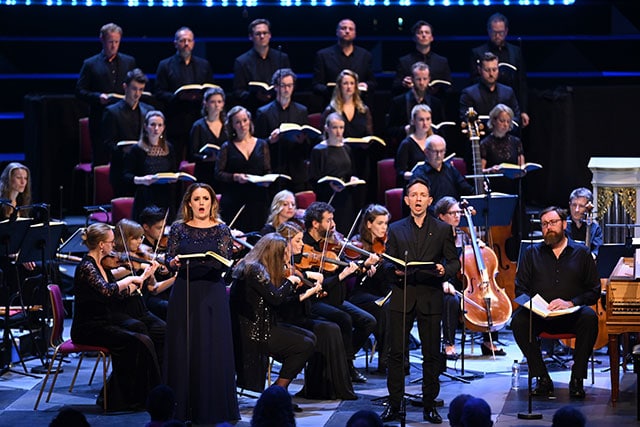 Arcangelo, founded by harpsichordist and conductor Jonathan Cohen just over a decade ago, have emerged as a leading baroque ensemble, drawing their players from stalwarts of historically informed performance like the Orchestra of the Age of Enlightenment and the Academy of Ancient Music. As the Proms draws to a close, they offered a stylish and involving Matthew Passion. The grand space of the Albert Hall, with its acoustic snow drifts, is a tall order for period ensembles and the lighter, more nimble voices of choirs in that mould (that evening, the Arcangelo voices, some 30 strong, and child choristers from St Paul’s Cathedral as the ripieno chorus). You will get more jewel-like glisten and diamond hard edges from Cohen and his colleagues’ sound if you catch the radio or television broadcasts. But ultimately not much was lost in the live experience – even if the first part took a while to build its emotional head of steam.

It was music-making of finesse and imagination, with no blemishes or scrapes that are sometimes licensed in the context of period performance. The opening chorus – ‘Kommt, ihr tochter, helft mir klagen’ – was fresh and dynamic, graceful and incisive. Murky oboe di caccia and bassoons slithered in ‘Ach, Golgotha’. The woodwind solos – especially flutes in ‘Du lieber Heiland’ – were remarkable throughout, having the lion’s share of the work across the atmospheric recitatives, painting many different hues of northern European gloom and shadow. Matthew Truscott’s violin, leading orchestra two, offered a fierce lyricism accompanying ‘Gebt mir meinen Jesum wieder’; Jonathan Manson’s viola de gamba danced graceful, mournful steps in ‘Geduld, Geduld.’ 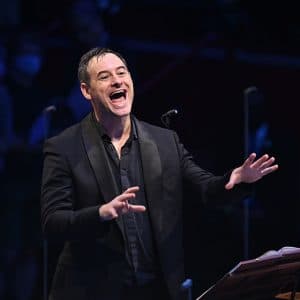 There was remarkable restraint too – nothing outrageous or edgy, but rather an enfolding feeling of reconciliation and tenderness as the drama unfolded. A quiet intensity bloomed from the strings as we came to the elegiac close of ‘Wir setzen uns mit Tränen nieder’ – music that describes humanity at the cusp of a new world. The drama intensifies in the second part of the work, with keener emotional edges in what felt sometimes like a rather well-studied first half (if expertly executed.)

Most shattering were the sudden changes of colour and weight when turning, as if on the head of a pin, into the reflective chorales that would follow. These were delivered with remarkable tenderness, offsetting these violent outbursts. ‘Wenn ich einmal soll scheiden’, the hymn that follows Christ’s death, was a moment of luminous repose and quiet grief. As a conductor once told me: nothing is more exciting than really quiet singing.

“It was music-making of enormous finesse and imagination…”

Unlike recent realisations by Peter Sellars and Mark Padmore, this was a conventional concert presentation. Skilful pacing from Cohen meant that the work hardly wanted for intensity or reflection. This was partly owing to a starry roster of soloists, including former collaborators from Theodora Iestyn Davies and Louise Alder. Here baritone Roderick Williams – a Christus of considerable authority himself – and tenor Hugo Hymas completed the lineup, anchored by Matthew Rose’s Christus and Stuart Jackson’s Evangelist.

Jackson has plenty of experience delivering bad news, from his recent run as the Shepherd in Glyndebourne’s Tristan. He was a vivid  narrator, agile and inventive in his colours, with especially ethereal shading above the stave. The storytelling was crisp thanks to properly sung consonants and deftly shaped vowels. There were many splendid moments of thrilling word painting – the veil of the temple was torn asunder with explosive fury – especially in Jackson’s account of Peter’s betrayal. The only complaint would be that some of the story unfolded too quickly, with moments of pause and repose dropped for expediency. This is never an easy circle to square in a work of such heavenly proportions, but the airy enormity of the RAH, moodily lit as always, often calls for the deepest reflection in a work like this.

Matthew Rose is a Christus of considerable experience, having recently recorded the Matthew Passion with the late great Stephen Cleobury. As a bass he brings natural gravitas to the character, and was remarkably consistent across the voice, especially secure in the upper reaches (evidently the Wotan he is preparing for ENO is paying dividends). His was a wounded, troubled Christus, defiant and sorrowful in equal part. Rose has at his disposal a powerful straight tone that he uses in moments of intense vulnerability and despair – most notably at the climactic ‘Eli, eli, lama asabthani?’

The evening belonged to the soloists too. Louise Alder gleamed in ‘Aus Liebe’, in a spellbindingly gentle return at the da capo. Hugo Hymas offered ardent intensity in ‘Geduld, geduld’; Roderick Williams offered understated, dusky grief in his climactic aria, setting the scene for the work’s sunset. Iestyn Davies offered exquisite softness and immaculately shaped phrases throughout, but especially in a ravishing ‘Erbarme dich’. His opening note of Part II – a burning then dying ‘Ach’ – summoned the lingering pain so essential to this work of grief and reflection.

This prom is available to stream through BBC iPlayer.