‘A Night at the Opera’ was the subject of this BBC Prom. 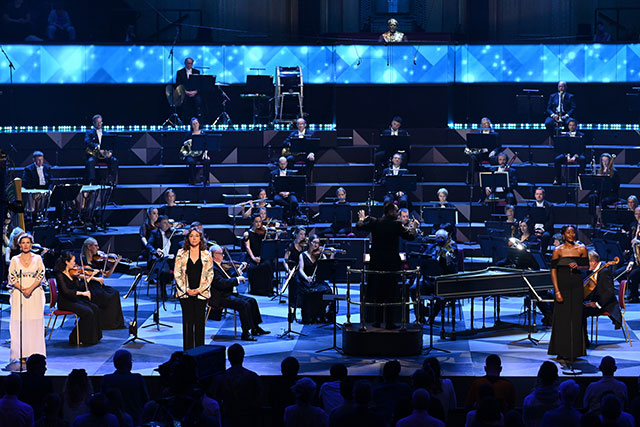 A Night at the Opera at the BBC Proms (Photo: Chris Christodoulou)

It was good to be back. And that feeling of joy of meeting up with an old pal you haven’t seen for a couple of years was the theme of this evening of operatic excerpts. Stitching together a selection of arias, duets, and ensembles from a disparate selection of operas, all revolving around the theme of reconciliation, and turning them into a cohesive whole was always going to be a challenge – yet by and large that challenge was met by six of the country’s finest singers.

The architect of the evening’s success was conductor Ben Glassberg, making his Proms’ debut. Still the envious side of 30, he’s already amassed a wealth of operatic experience through his posts at the Glyndebourne Tour (principal conductor) and Opéra de Rouen (music director). Manoeuvring the players of the BBC Philharmonic back and forth through such a wide range of styles – classical, baroque, verismo – can’t have been easy, yet he made it look like plain sailing. And he was rewarded with both impeccable and stylish playing. Equally at home in the period crispness of Handel, and the romantic lushness of Humperdinck, his players responded willingly to Glassberg’s innate understanding of each composer’s sound world. He’s conducting the ENO’s revival of La Bohème in January, which is excellent news. 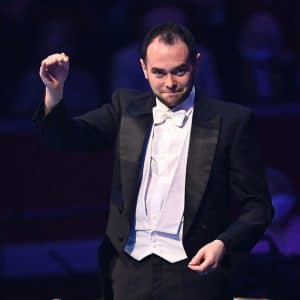 He gave notice of what we might expect, as one of the undoubted highlights of the evening was the sewn together excerpts from Act I of Puccini’s masterpiece, outstandingly well conducted, played, and sung. It was impossible to resist the emotional pull from Natalya Romaniw’s touching Mimì, and Freddie De Tomasso’s ringing Rodolfo. She infused ‘Mi chiamano Mimì’ with tenderness, while he pulled out all the stops in ‘O soave fanciulla’. His lyric-spinto voice is a thing of wonder, especially as he’s still only 28. He filled out Puccini’s soaring phrases gloriously, never forcing the voice, but simply letting it speak for itself.

De Tomasso returned later to give a limpid account of Don Jose’s ‘La fleur que tu m’avais jetée’ from Carmen. With engagements in the pipeline at the Vienna State Opera (Don Jose, Pinkerton) and Covent Garden (Cavaradossi), here is a prodigiously gifted young singer who looks set to take the operatic world by storm.

He was in august company. Sally Matthews (Leonora) and Nicky Spence (Florestan) were committed partners in the excerpts from Fidelio. Making light of the technical difficulties Beethoven throws their way, she surmounted the considerable challenges of ‘Abscheulicher!’ with ease, her soprano gleaming throughout. Spence gave a thrilling and deeply moving account of ‘Gott! Welch dunkel hier!’, whilst they were both properly ecstatic in ‘O namenlose freude!’

Mezzo-soprano Christine Rice caught the grief and anguish of Gluck’s ‘Che faro senza Euridice’ to perfection and provided the perfect foil to Nardus Williams’ gleaming soprano in ‘lo t’abrraccio’ from Handel’s Rodelinda. Williams then went on to exert her magic as the Sandman in Humperdinck’s Hänsel und Gretel, sending Matthews’ Gretel and Rice’s Hänsel to sleep, but not before singing their ravishing duet, ‘Abends, will ich schlafen gehn’. Glassberg and the BBC Philharmonic players then delivered a lush, full-blown account of the ‘Dream Pantomime’, which was as moving as it was enchanting.

The evening concluded with the closing scene from Jenůfa – but with two world-class Jenůfas on the platform (Matthews and Romaniw) who would we get? The task fell to Romaniw who, partnered with Spence’s Laca, filled Janáček’s soaring lines sensationally. Spence matched her phrase for phrase. But this scene is brief. For it to pack an emotional punch you need to have seen the entire opera, so despite being rapturously played and gloriously sung it didn’t provide the fitting climax hoped for.

Still, it was good to see six of our finest opera singers on such winning form, ably supported by a young conductor who on this showing is evidently destined for great things.