Early choral works from Bach and Handel given sparkling performances by the Monteverdi Choir and Ann Hallenberg under John Eliot Gardiner at the BBC Proms. 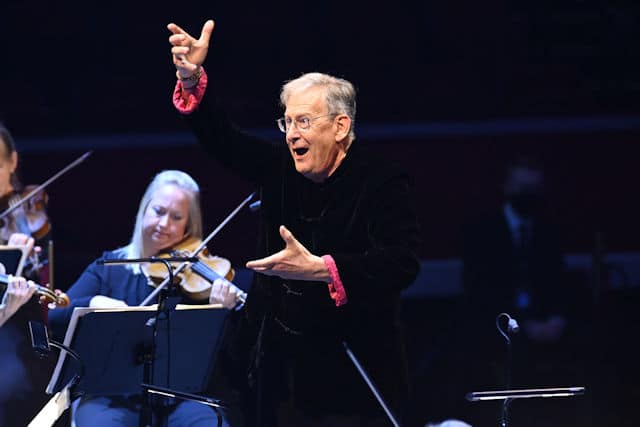 Both born in 1685, Bach and Handel arrived at their early 20s in different circumstances. Bach was grubbing away at mid-status organist jobs near his home town of Eisenach, whereas Handel was in Italy, the darling of the Roman smart set, learning to perfect the stylish operas that would establish his later reputation. Wednesday’s Prom saw exemplary performances, by the Monteverdi Choir and the English Baroque Soloists under John Eliot Gardiner, of religious works by both composers from 1707.

Christ lag in Todes Banden is one of Bach’s early experiments with the cantata form that would develop into the more solo-heavy structures of his prodigious Leipzig output years later. In Christ lag… Bach takes a Lutheran hymn and creates seven variations on it for chorus and instruments, demonstrating his acknowledged genius for manipulating harmony and texture. There are slow, intense, contrapuntal renderings, busy string underlays to a sectional ‘solo’ line, jerky, double-dotted interpretations, exquisite displays of suspense and release, and a final homophonic chorale. All of these were pointed up for maximum contrast by both singers and players, under Eliot’s sure direction. The voices tiptoeing into the opening statement, giving slight pushes on their entries; the exquisite alto and soprano suspensions in ‘Den Tod…’; the whispered tenor entry at the opening of ‘Es war ein wunderlicher König’; the marcato ‘Ein Spott’ in the same verse: all displayed the usual hallmarks of Eliot’s consummate understanding of use of tone and dynamic to wring a maximum amount of drama from a work. 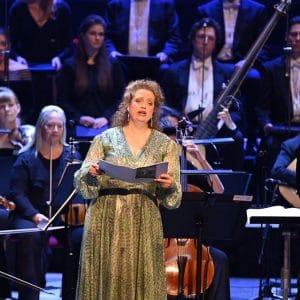 Handel’s Donna, che in ciel is a freestanding Marian cantata written to mark the anniversary of Rome’s delivery from the 1703 earthquake. It’s a display piece for a solo voice – these days, usually a mezzo, but one wonders whether it had originally been for castrato, given its range and florid qualities. Again, it’s a work of contrasting movements: there is dramatic (albeit politely musical) terror, a sprightly French overture opening, an intense prayer to the Virgin, and a quantity of energetic running passages for the soloist in all of the voice’s registers. Ann Hallenberg tackled the work with verve, and accomplished some good results, although the Royal Albert Hall, sadly, was not her friend in terms of projection. At the top of her range, her voice has a beautiful bell-like timbre, and her slightly detached legato lines in ‘Tu sei la bella serena stella’ were clear and lovely. Her chest-voice material, especially in the low runs of ‘Sorga pure…’ sadly lost focus, though. Once again, manner, timbre and dynamic were delivered in spades by the players (although, on occasion, they swamped the solo voice a touch).

Dixit Dominus – a setting of one of the Vespers psalms – might have been Handel’s first work written in Rome, and it’s arguable that he would never write any choral work quite so challenging. It is full of pyrotechnic exuberance and off the wall techniques (‘Dominus a dextris…’ alone is full of astonishing volte faces of tempo, mood, and delivery). The performers did not disappoint, applying, by turns, ferocious energy and mannered elegance to the Italianate tropes: ‘wall of death’ work spitting out the words at speed in ‘Tu es sacerdos’; the subtle bass under-chorus of ‘’De torrente…’; and some almost painful pressure on the suspensions from the soloists in the same movement (so good they performed it twice). Some slight overenthusiasm in the basses occasionally led to balance issues, but these were minor. The solos came from the choir, and were all generally good – particularly, Bethany Horak-Hallett’s ‘Virgam virtutis…’ where her focus in the lower register was spot on.