A contemporary nod to the Baroque at the BBC Proms. 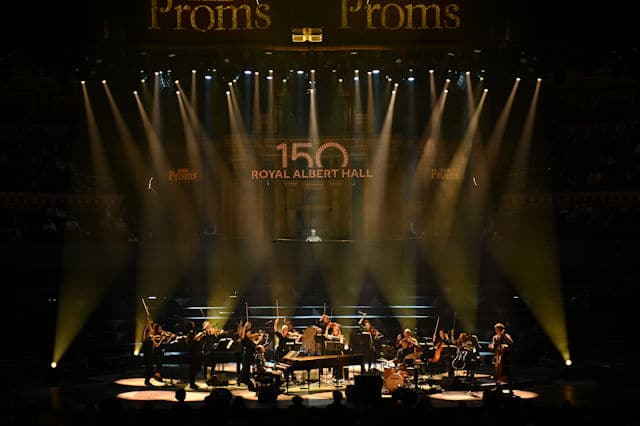 Tuesday evening saw the Prom debut of the experimental ensemble, Manchester Collective under their violinist-director Rakhi Singh. Although the image they promote (young, informally dressed, and often performing in unusual venues) suggests a touch of ‘too cool for school’, they display an astonishing talent, slick co-ordination, and a clear love of the contemporary, quirky repertoire they play.

In keeping with their left field image, the Collective, in a nod to the Baroque, presented a programme of string and harpsichord based works from the 20th and 21st centuries – demonstrating perfectly why the Proms are such a necessary part of Britain’s music scene.

Henryk Górecki is best known for his contemplative works, but his 1980 Harpsichord Concerto is anything but. Two relentlessly busy movements of breathtakingly sustained Minimalist rhythm (think the love child of Nyman and Reich) had the audience drilled to their seats, and the soloist, the peerless Mahan Esfahani, jumping up and down on his stool to deliver a barrage of schrecklicher chromatic chords.

Edmund Finnis’ The Centre is Everywhere provided some calmer downtime after the storm. Commissioned by Manchester Collective, it is a work of subtle overlapping string lines that allowed the mind to wander through its slowly moving landscape (with occasional diversions: a quickening of pace, or a cluster chord that sounded like the air being let out of an accordion), and demonstrated the Collective’s spot-on intonation.

“Although the image they promote… suggests a touch of ‘too cool for school’, they display an astonishing talent…”

The American composer Julius Eastman is a sadly neglected voice in 20th century Minimalism, and his The Holy Presence of Joan of Arc reminded us of this loss. Originally scored for ten cellos, the version performed (with considerable bravura) was an arrangement for string orchestra. It is an angry piece, and understandably so, from a black, gay, itinerant composer in 60s New York, channelling an ‘ill-treated if turbulent’ 15th century martyr. The turbo-charged battle waged between a rock ‘n’ roll bass ostinato and an angular lyric theme is presented through a ‘rage against the machine’ fusion of Minimalism and 20th century Modernist harmonies that left the listener angrier still at Eastman’s unremarked passing in 1990. 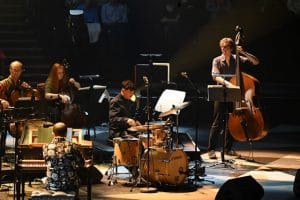 A deliciously playful mood prevailed in the final two works. Dobrinka Tabakova’s Suite in Old Style, ‘The Court Jester Amareu’ is a three movement pastiche of mediaeval tropes that might have been written, decades ago, by the likes of Malcolm Arnold. Tabakova’s 2006 piece, though, is more earthily Eastern European, and features rustic hunting themes (with some raunchy work for drum, tambourine and harpsichord) and a fantastical waltz (more a mazurka, really) as a middle movement. The solo instrument here is a viola, and Ruth Gibson’s virtuosic playing – from lush romance to a brief, but fiery cadenza – complemented the acuity of the ensemble’s intense performance.

Joseph Horovitz’ Jazz Harpsichord Concerto is a work that needs a lot more exposure. A concerto grosso for harpsichord, drums and string bass masquerading as a tour de force of hot 60s jazz riffs, it herds Swingles, Jacques Loussier and Brubeck into an entire cattery of cool rhythmic contrasts. Kudos to Misha Mullov-Abbado (string bass) and Alan Taylor (drums) for their peachy solo spots at the openings of the second and third movements.

Wojciech Kilar’s Orawa formed the encore, which, while given a cracking account, was just a tad long for a lollipop.

The only other criticism of the otherwise fabulous evening was that Manchester Collective felt it necessary to be amplified for everything. Some of the works required it, and it is understandable that a small ensemble in the RAH might wish to up the volume, but at times, the sound (especially the thumping harpsichord) felt a little over-contrived.