Martin Baker plays Bach and his own improvisations on the Royal Albert Hall’s mighty organ at the BBC Proms. 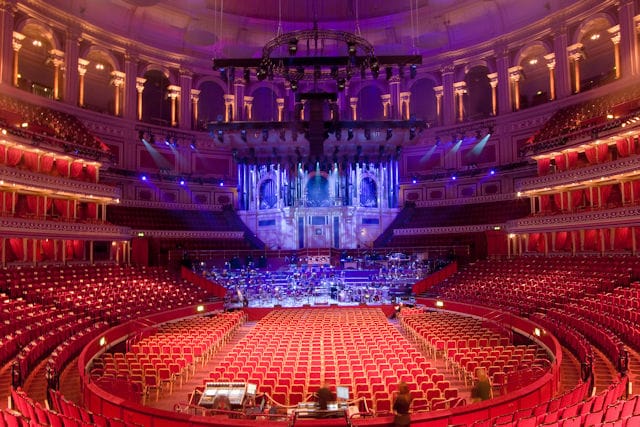 Owing to the unfortunate indisposition of Olivier Latry, the organist making ‘The Voice of Jupiter’ sound at Sunday lunchtime’s Prom organ recital was Martin Baker, former President of the Royal College of Organists, and recent Master of Music at Westminster Cathedral.

Baker began the recital with Bach’s complex E-flat major Prelude and Fugue (‘St Anne’) using a registration that sounded deceptively ‘classic’, but as the piece went on, the realisation dawned that Baker was cleverly playing with our sense of timbre. Yes, the registration sounded remarkably similar throughout, but he was using the subtle differences across the range of ‘synonymous’ stops to point up the three themes in each of the prelude and the fugue, such that there were timbral differences, yet all was a unified whole, cleverly echoing Bach’s message of the Trinity across the work.

Baker’s own improvisation on the St Anne pair followed, and in this he gave us much more variety in texture from the opening pulsing material reminiscent of a funeral march (picking up the first theme of Bach’s Prelude), through some sinister closed off reeds into an insistent appearance for the ‘gigue’ theme from the fugue, the whole then gradually disappearing into a quietly bubbling finale.

The segue into Bach’s Fantasia in G major (pièce d’orgue) from this quiet close was almost imperceptible, as Baker opted to open the Fantasia on the quietest of stops. The grand arch of the Fantasia was outlined in a gradual crescendo-decrescendo, and the piece returned to its opening lightly frothing mood in the series of squeaks and pops of the freewheeling cadenza.

“…as the piece went on, the realisation dawned that Baker was cleverly playing with our sense of timbre”

Baker’s improvised response to the Fantasia began with more delicious woody bubbling, that moved, via a shimmering passage from the string pipes, into a light tip-toe interlude for flutes. The improvisation closed with a hint of the Fantasia’s final broad theme over a low rustling, moving once again onto a quiet low pedal note.

Having established his trademark segue, Baker deployed it again, using his arrival at the near-silent pedal to begin Bach’s Passacaglia and Fugue in C minor with an unusually pianissimo dynamic. It was in this account that Baker demonstrated a quirky genius for interpretation. The work is interesting in that Bach uses the passacaglia’s main theme also as the first of two subjects for the fugue, and the fugue follows the passacaglia seamlessly. Using this ambiguity, Baker chose to shift the boundary markers across the whole work by simply varying the texture and dynamic such that ‘movements’ emerged that were unrelated to the piece’s original structure.

The final work in the programme was Baker’s improvisation on ‘English themes’. Obvious Prom tributes emerged, beginning with the opening contortion of the fanfare that begins Elgar’s Pomp and Circumstance March No 1. Thrown into the mix were a variety of tunes including Nimrod, What Shall We Do With The Drunken Sailor? and even a fleeting appearance of Coronation Street. The improvisation also, in a nod to the earlier part of the programme, brought in William Croft’s St Anne hymn tune (‘O God our help in ages past’) whose similarity to Bach’s E-flat fugue subject gave the Bach piece its soubriquet. All of this was pulled together in a toccata-like work that came to a close, possibly with a nod to the absent Latry, in a frantic Vierne-like coda.