Peter Holder performs a programme of the highest quality on ‘The Voice of Jupiter’ at the BBC Proms. 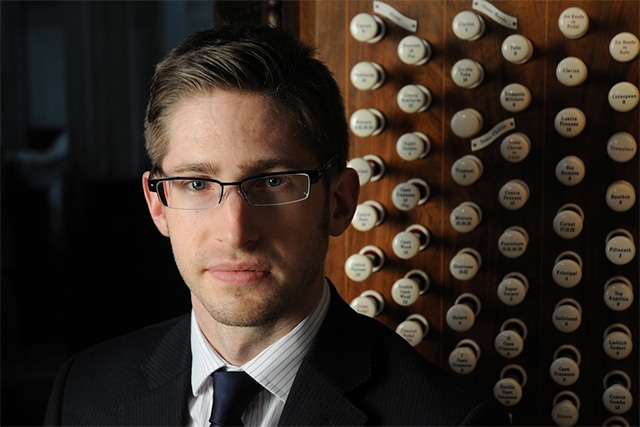 There can be few more pleasant ways to start a weekend than with a Saturday morning organ recital in the Royal Albert Hall. The act of all eyes falling on a single person who through ‘The Voice of Jupiter’ (as the organ is known) is capable of filling this vast interior brings senses of calm and excitement in equal measure. When the performance, however, is of the standard delivered by Peter Holder the experience rises to the level of the truly special.

Thomas Trotter was originally scheduled to perform this Prom but had to withdraw with an arm injury, paving the way for Holder, who is Sub-Organist at Westminster Abbey and one of the UK’s leading concert organists, to step in. The recital was the second in the season, following Martin Baker’s in early August, to put the spotlight on the hall’s Willis / Mander organ and, with 2021 marking the centenary of the composer’s death, paid tribute to Saint-Saëns by recreating elements of his performances on it in 1871 and 1880.

The concert began with W. T. Best’s arrangement (1862-74) of the ‘Coronation March’ from Meyerbeer’s Le prophète (1836-49). Best, who performed at the Albert Hall’s official opening ceremony on 29 March 1871, was the preeminent organist of his day, and arranged many pieces for the instrument. In this instance, he reproduced the march’s strident tunes, military fanfares and even a trumpet solo with striking accuracy, and in the process placed many technical demands on the organist. By the same token, however, the piece displayed the nature of Holder’s versatility. So capable is he of achieving every desired effect, and so appropriate is the sound that he produces at every turn, that it hardly occurs to us how much flexibility he is demonstrating in his playing or technique, because what is produced seems such a natural fit for the music.

J. S. Bach’s Fantasia and Fugue in C minor, BWV 537 (c.1723) also proved highly suited to displaying Holder’s brilliance. Bach’s technical mastery of structures and forms is always in pursuit of music that rises to another level, and here the precision and accuracy that Holder demonstrated was enough in itself to generate a mellifluous sound where one could also detect an extra layer of intrigue beneath the surface. His performance of the Allegro vivace from Widor’s Organ Symphony No. 5 in F minor, Op. 42 (1878-9) brought out to the full all of the contrasts inherent in the movement so that some sections seemed to exist in a wispy ‘half-life’ while others felt far more full-blooded. Saint-Saëns’ Fantaisie in E flat (1857) also revealed how Holder can be a master of delicacy, but also bring real grit and strength to a piece.

The final and longest piece in the programme was Liszt’s Fantasy and Fugue on the Chorale ‘Ad nos, ad salutarem undam’ (1850-51). In a nod more perhaps to the composer in general than to this specific piece, the Albert Hall’s lights were turned to a Mephistophelean red as Holder led us on a breathtaking half hour of virtuoso playing in which different moods and themes were delineated to wondrous effect. Peter King, Organist Emeritus of Bath Abbey, suggests that “While still recognising that the organ’s natural home is in church, or rather that its comfort zone is with the religious, Liszt enabled the organ to break out into a new world and secure for itself an honourable place in the post-Classical era”. In this instance, Holder certainly succeeded in raising a normal Saturday morning to the realms of the ethereal in South Kensington’s own temple to music.