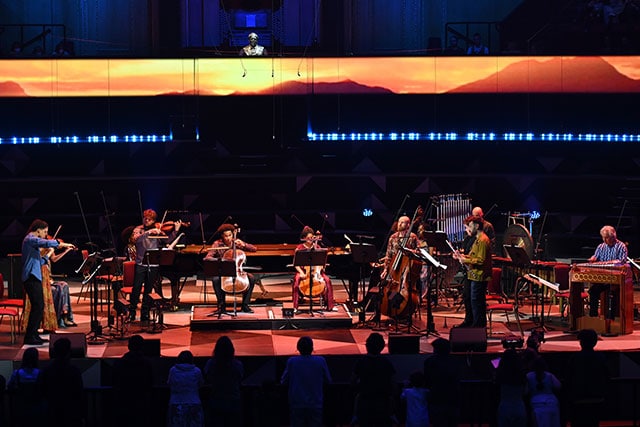 West London in August normally hums with festivals, classical or otherwise – prommers eating sandwiches in the queue for the Albert Hall, hampers and bow ties waiting for the Glyndebourne train at Victoria, and a lick of jerk smoke from the Notting Hill Carnival. The latter was cancelled this year, but the effusive, joyful Kanneh-Mason roadshow brought at least a flavour of it to the Albert Hall in last weekend’s Family Prom, in a multimedia blend of music, words, movement, and theatre. Live BSL interpretation came from Angie Newman; the whole spectacle was scripted and directed by community performance act practitioner Sian Ní Mhuirí.

Daniel Kidane’s Revel was the first mix of words and music – a BBC commission and receiving its first performance. Four pieces with verse interludes from Lemn Sissay told the story of a day at the Manchester Carnival, narrated with brio by EM Williams. Carnival, Williams told us, is another word for emancipation – for freedom. Kidane’s score is one that hums with possibility. Dawn breaks with shimmers of glass harmonica, bowed cymbal, and flute; a spiky dance breaks out full of Stravinskian cross-rhythms and stabs of clarinet. Lemn Sissay’s poems are percussive and lyrical in equal measure, rhymes tripping over each other from an inimitable voice. Musically, Revel is bright and tonal, energetic and clean – nothing to frighten the horses, but likeable, warm, and inviting all the same.

Sunday’s musical menagerie was completed by plenty of star attractions in their own right – clarinetist and composer Mark Simpson (who also led the ensemble unobtrusively in Revel), the viola of Timothy Ridout, Adam Walker on flute, Adrian Spillet on percussion and Alasdair Malloy on eerie glass harmonica. This was all complemented by warm, dynamic lighting and projections (uncredited in the programme) that set the imaginative scene, with bobbing fossils or blooming feathers.

“…a multimedia blend of music, words, movement, and theatre”

Camille Saint-Saëns’ The Carnival of the Animals belongs to the world of dreams, indulging the slapstick, the surreal, and the most fanciful flights of the imagination. So often is otherworldliness the quality of pieces composed for private consumption or from eccentric whim. The Lion’s introduction had all the languor of a cat yawning awake. The duelling pianos of the wild asses were thrillingly breakneck, if a little undefined in the cavernous RAH acoustic. Comic effects were never knowingly understated, whether an extravagantly rude clarinet glissando from Simpson, or crudely braying violins in the ‘Persons with Long Ears’.

New words to accompany this ‘zoological fantasy’ came from former children’s laureate Michael Morpurgo. Morpurgo’s poems balanced the lightness of the work with just a whisker of melancholy. His tortoise makes a defiant plea for life lived in the slow lane – “you’ll wear yourselves out!”, he chides – and the birds of his aviary remember their stolen freedom from an African parrot who joins their (musically) gilded cage. The fearsomely executed flutter-tonguing from Adam Walker’s flute was full of the desire to escape. Morpurgo’s Kangaroos recall the hunters who’ve penetrated the Australian interior for their meat – the hopping provided by Isata and Konya takes on, in that context, just a little skittish restlessness.

There was longing and magic aplenty across this strange little suite. Toby Hughes’ double bass offered dignified lyricism rather than the choppy grumbling the Elephant often gets; Sheku Kanneh-Mason’s Swan – every ‘cellist’s favourite party piece – was rapt. Simpson’s cuckoo showed remarkable wit and timbral variety with only two notes.

Pretending to play badly is no mean feat. The funniest moment – perhaps inevitably for a music critic – was the ‘the Pianists’, which Saint-Saëns asks to be played “in the faltering style of the novice”. Here, Sheku and Braimah swapped instruments with Isata and Konya, stumbling up and down the keyboard while the latter pair sawed away and the ensemble fell apart, Simpson’s clarinet a literal cuckoo in the nest with his wayward irruptions. The right notes, but defiantly in the wrong order, and all carried off with terrific theatricality.