The first Last Night of the Proms with a live audience for two years raises the roof of the Albert Hall. 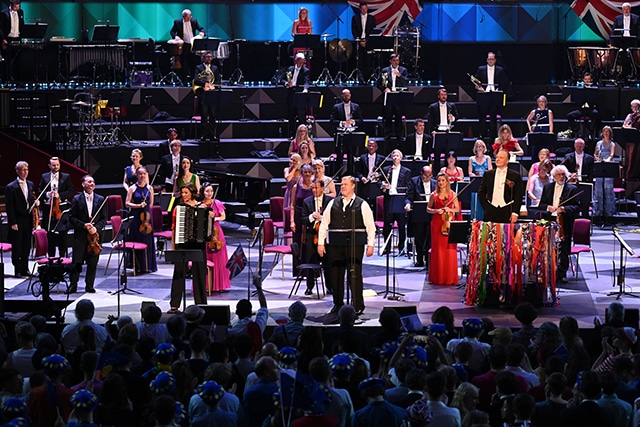 The words that seemed to be on everyone’s lips were “it’s good to be back”. There may have been a Last Night of the Proms in 2020 with no audience, while the Proms have been admitting spectators for the past six weeks. However, a Last Night performed in front of a large crowd once more acted as the most poignant symbol of the resilience, not to mention importance, of music in times of crisis. The audience was still not quite the size of previous years as the arena was made smaller for 2021 to accommodate a larger stage. If anything, however, this only brought a greater sense of intimacy to this large-scale event, which is what any Last Night should strive to achieve anyway.

The programme could have been regarded as a little scrappy as all of the pieces were short, with there being nothing along the lines of Berlioz’ Lélio – Fantasy on Shakespeare’s ‘The Tempest’ that brought such gravitas to the first half of the proceedings in 2018. However, it was very well crafted so that it gave due attention to some of the season’s featured composers while maximising on the talents of the evening’s two soloists, tenor Stuart Skelton and accordionist Ksenija Sidorova. As is the tradition, the evening began with a new BBC commission, which in this instance was Mother by Gity Razaz. Played out through two yearning melodies that contrast the wonder and resilience of nature with the precarious state of our planet, the piece proved very successful as it felt propelled from start to finish by an underlying, albeit highly varied, pulse.

This was followed by Malcolm Arnold’s Variations for Orchestra on a Theme of Ruth Gipps, Op. 122 (1977). Arnold deliberately began it with a chord that represented the type of dissonant modernism that Gipps disliked, and which intentionally sees a disconnect with the piece’s main theme. In this performance, the BBC Symphony Orchestra, under the baton of Sakari Oramo for the fifth time at a Last Night, revealed immense skill in rendering the variation sequence that is based on both themes with beauty and integrity.

This concert fell on the twentieth anniversary of the 9/11 attacks on New York, Pennsylvania and Washington D.C. The Last Night in 2001 had actually fallen just days after them and a performance of Barber’s Adagio for Strings (1936) was added to the swiftly changed programme to honour the fallen. It felt fitting therefore for the piece to be included on this anniversary in a new arrangement by Jonathan Manners, thus combining the ideas of remembrance and renewal. Barber created a vocal version of his work in 1967, Agnus Dei, but that is usually sung a cappella, though he did write optional organ or piano accompaniments. This version began with just the voices of the BBC Singers before the strings were introduced, and the way in which the instruments underlay the human voice, thus bringing notable richness and depth to the work, was highly skilful not to mention exceptionally moving. Credit too to the audience for giving the performance the silence it deserved at the end before bursting into rapturous applause, quite an unusual thing to witness at a Last Night! 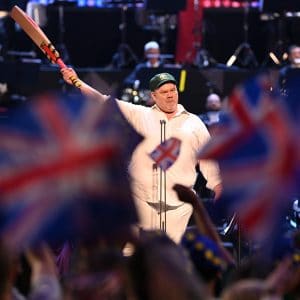 The ‘Rigaudon’ from Ravel’s Le tombeau de Couperin (1914-17) in its orchestrated version of 1919 followed before accordionist Ksenija Sidorova took to the stage. I had only ever heard her live once before, at Grange Park Opera in 2017, but she brought everything we could wish for as she combined superb playing with the flair, panache and sheer sense of fun that the occasion demands. Her first performance of the evening, of Franck Angelis’ Fantasia on a Theme of Piazzola: Chiqilín de Bachín (2016), was sublime, while her Libertango (1974) in the second half raised the Albert Hall roof.

Stuart Skelton rounded off the first half with two Wagner songs that broadly represent the two sides to the composer’s output. ‘Im Treibhaus’, the third Wesendonck Lieder (1857-58, performed here in its orchestrated version of 1893), shows Wagner’s more innovative side, and the music was subsequently developed into the Prelude to Act III of Tristan und Isolde. Skelton’s performance was perhaps on the quiet side considering the size of the hall, but impeccably rendered as he showed great attention to detail in ensuring that his precise sound followed the emotion and meaning of the words at every turn. Following this came the more straight forward ‘Prize Song’ from Die Meistersinger von Nürnberg (1861-67), though I can think of few songs that are quite so radiant. Unfortunately, following a good start, his voice started to crack during the third verse (the Aftersong). It can happen to anyone at any time, and it was simply a shame that it happened here. My fear was for how this boded for the rest of his performances that evening, although it was allayed as soon as Skelton got stuck into the second half.

After the interval the BBCSO gave a thoughtful rendition of the third movement, ‘Juba Dance’, of the Symphony No. 1 in E minor (1931-32) by Florence Price, one of the season’s featured composers. The second half also featured Sidorova and Skelton bringing the house down with Aníbal Troilo’s Sur (1948), Skelton and the BBC Singers giving a moving performance of Brigg Fair, arranged by Percy Grainger in 1906, and three pre-recorded performances from Wales, Northern Ireland and Scotland respectively. The Last Night’s traditional fare did not take us to anywhere we would not normally expect to go, but everything was played well as the audience entered fully into the spirit of the occasion. I still long for a year when Henry Wood’s Fantasia on British Sea Songs (originally 1905) is performed in its entirety as ‘The Anchor’s Weighed’ and ‘Farewell and Adieu, Ye Spanish Ladies’ have always been omitted in recent years, while parts of the audience were too disruptive in ‘The Saucy Arethusa’, a piece where there is little scope for making superfluous noise. However, it was good to see the right interaction in ‘Jack’s the Lad’ (the Hornpipe) between orchestra and audience as the former stayed rock solid while pandemonium seemed to be unleashed all around. That’s how it should be!

But perhaps the things that will stay longest in the memory from the second half are Skelton’s performance of Iain Farrington’s arrangement of Peter Allen’s ‘I Still Call Australia Home’ (1980), which it was clear meant so much to him personally, and his costume for ‘Rule Britannia!’. He had promised in advance he had something up his sleeve that would honour his Australian roots, leaving everyone to speculate on what it would be. In the event, he donned cricket flannels and a bat, and the sight of him entering during the preceding ‘See, the conqu’ring hero comes’ was enough to raise the levels of excitement to fever pitch, before his performance more than matched the standard of his entrance.

The Last Night of the Proms is currently available on BBC iPlayer, along with many other Proms from the 2021 season, and BBC Sounds, along with all of this year’s Proms.