Glyndebourne Festival Opera makes its annual visit to the Proms with a concert staging of Wagner’s masterpiece. 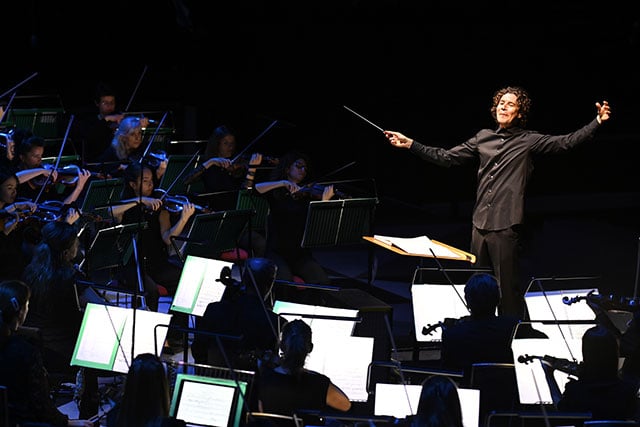 Glyndebourne Festival Opera has a long and proud tradition of taking one of its productions each year to the BBC Proms. Normally, what was originally staged is presented in a semi-staged format, but this year the Proms performance would have been far closer than usual to what had been seen in Sussex. This is because COVID-19 dictated that the planned revival (by Daniel Dooner with Paul Higgins reworking it for the Proms) of Nicholas Lehnhoff’s 2003 production of Tristan und Isolde should be presented as a concert staging. Wagner orchestras are so large that it is difficult to socially distance them in a pit, so this way the orchestra could be better spaced out on the stage. The same approach was adopted by Longborough Festival Opera for its Die Walküre in June, but while there the orchestra was spread across the pit and stage with the singers behind, here the soloists stood in front of the eighty-strong London Philharmonic Orchestra.

In fact, the element that truly shone in this performance was the LPO. The Glyndebourne run represented the first time that Robin Ticciati had conducted any Wagner opera in its entirety, but, that being so, one can only conclude that he is an absolute natural. Unlike Parsifal, where part of the conductor’s skill is to maximise on the fluidity that is inherent in the score, with Tristan one has to be completely on top of controlling the sound, though without making it feel as if the output is being rigidly micromanaged. Ticciati excelled in all respects, totally commanding the tempi at every turn and paying keen attention to texture and balance while eliciting playing of the utmost beauty. It is clear that he had studied the score intensely, and yet the added ingredient was the freshness that he brought to it, as if this performance did not feel unnecessarily burdened by the weight of history. 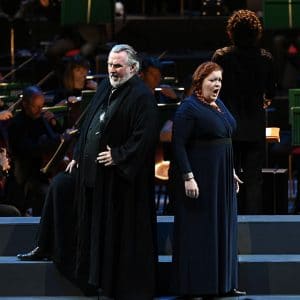 COVID-19 restrictions were tighter when this Tristan was planned than when it was actually performed at Glyndebourne. As a result, while social distancing was not always adhered to (Tristan roughly grabbed Kurwenal’s arm at one point), clearly it was always on Dooner’s mind and was played upon in elements of the staging. The singers performed on blocks in front of the orchestra, arranged to create steps on three or four levels. In this way, Tristan could stand at the top when manning the helm and yet be in a totally different place on the ship to Isolde who stood only just below. It created the odd clumsy moment when, with the pair being so close physically, Brangäne had to exit the stage only to return to the same point to show how she was leaving Isolde’s quarters on the ship to see Tristan. Overall, however, the staging worked well and there were nice touches such as Melot entering at the end of Act I to reveal how already he was eyeing up what was happening between the lovers. There were times in Act II when Tristan and Isolde could sharply turn away from each other to end up occupying opposite ‘corners’ of the performance area in moves that may have been designed to aid social distancing, but also held aesthetic appeal. Particularly effective was King Marke’s Act II lament, which he performed mainly from the top step as Melot faced outwards on one side and Tristan to the back on the other, while Isolde collapsed on the lower step in despair.

“…the element that truly shone in this performance was the LPO”

Karen Cargill was outstanding as Brangäne, producing a strong, clear and excellently shaped sound while astutely conveying the character’s concern and guilt. Her performance of ‘Einsam wachend in Der Nacht’ was beautiful and astonishingly together with the orchestra considering that she sang it from the very back of the gallery. This contrasted with Sarah Connolly and Mihoko Fujimura who both sang it from near the Albert Hall’s organ in performances here in 2010 and 2013 respectively. Shenyang produced a wonderful sound as Kurwenal, while really making the character feel loyal and well-meaning, even though he did not understand matters on the same level as Tristan. As Marke, John Relyea produced an excellent bass sound and some particularly impressive deep notes, while convincingly portraying the King as having been utterly drained and dishevelled by Tristan’s ‘betrayal’.

As Isolde, Miina-Liisa Värelä produced a rich, nuanced and generally powerful sound. Overall, it seemed less suited to the demands of Act I, where it did sometimes struggle to be heard over the orchestra, but it really came into its own in Act II. Her relationship with Simon O’Neill’s Tristan was not as dynamically rendered as in many performances with the ‘false climax’ to Act II seeing them standing apart facing outwards. There was, however, a quiet intensity to their relationship, which was rendered most effectively when prior to this they huddled more closely together on one of the steps.

In Act I Simon O’Neill demonstrated enough of his free, easy and expansive tone to make us believe he would subsequently take flight in Act II. Sadly, the promise did not materialise, albeit for totally understandable reasons that meant what he did produce was remarkable in its own right. As was explained at the start of Act III, O’Neill had lost his voice and would not be able to proceed, prompting Neal Cooper playing Melot to sing Tristan from the side without a score while O’Neill continued to act the part. Personally, I would have preferred Cooper to have continued to have both sung and acted Melot as Tristan is dead by the time his adversary appears, and it felt muddled to see a further figure appear just to be killed. However, such decisions would have had to have been made in minutes, and Cooper performed brilliantly. Of course, he knows the role but it is never easy to take on such a demanding sing without prior notice, and his warm tone and sense of feeling in everything he sang came across extremely well. Full marks therefore to Cooper, but also to O’Neill for striving to push his understudy forward at every opportunity during the curtain call on what ultimately proved to be a highly memorable night at the Proms.