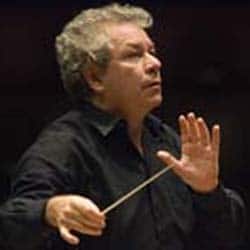 The BBC Symphony Orchestra and its Chief Conductor Jiri Bělohlávek made a very good impression at their Barbican concert on 14 October. Evidently the artistic rapport between conductor and orchestra is excellent. Orchestras don’t always play what their conductors seem to indicate, far from it, but the BBC SO is clearly willing to follow and deliver Bělohlávek’s musical direction.

The most striking feature was something which is so basic that it should be taken for granted – the orchestra played what was in the score. More often than not, orchestras ignore performance markings to an alarming degree. Granted, different editions of music scores might have variations but these differences don’t justify the liberties which I hear on far too many occasions.

I should now clarify that my praise for the BBC Symphony Orchestra’s disciplined adhering to markings in scores refers to Mozart’s Piano Concerto No. 21 in C major and Stravinsky’s revised 1947 version of Petrushka. Their opening item, a Suite derived from Janáček’s opera The Cunning Little Vixen, was slightly problematic. The arrangement is not by Janáček, it is not well known and access to the score is beyond library membership. In 1937, a decade after Janáček’s death, conductor Václav Talich asked František Kovář to re-orchestrate The Cunning Little Vixen. Later Talich used this re-orchestration when he created the Suite from the first act of the opera. Talich’s deep appreciation for Janáček is well documented. In turn, Bělohlávek showed deep appreciation both for Janáček and Talich and his interpretation inspired further interest in the opera.

By all accounts, Moscow born and based pianist Nikolai Lugansky is well liked on the international concert circuit. He is clearly very disciplined and concentrates on his piano playing rather than on any superficial marketing tricks. But sadly, his reading of Mozart lacks all those inner voices as well as the more obvious contrasts between light and shade which make Mozart such a great composer. Furthermore, on this occasion, the BBC Symphony Orchestra showed more Mozartian style than pianist Lugansky. Presumably Bělohlávek coached the orchestra but not the piano soloist.

Petrushka, originally composed for a small ballet orchestra but revised for a huge orchestra in 1947, received a brilliant performance. The piece is difficult technically but it did not sound like that. All brass and wind solos were breathtaking but special mention must be made of the extended trumpet solo in the Third Part of the piece. Ensemble among wind and brass players was particularly impressive. There is a section in the Fourth Part where two trumpets alternate their phrases, yet they sounded like just one player. Out of all the impeccable wind soloists I would like to mention oboist Richard Simpson who impressed with his warm sound throughout the whole evening.

My view may be controversial but I believe that there are no good orchestras and bad orchestras, only good conductors and bad conductors. Bělohlávek directed a spirited but also exact account of Stravinsky’s bitter-sweet tale. It was clear throughout that we were listening to music composed for dance. Russian folk melodies (especially the one during the nursemaids’ dance) were allowed to sing splendidly. Bělohlávek’s directions were clear and the orchestra responded superbly. I only wish I could see Petrushka – my appetite has most definitely been whetted.