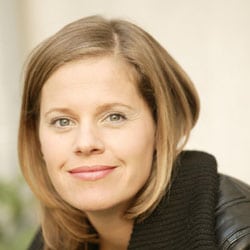 Swedish soprano Camilla Tilling raises the temperature in the Barbican with a spell-binding performance of a little gem of a work by Zemlinsky.

Zemlinsky’s rarely heard fin-de-siecle piece, Waldgesprach, proved to be the musical highlight of a rather lacklustre evening.

The other two works in the concert, Haydn’s Symphony No. 96, Miracle, and Mahler’s Symphony 4, remained stubbornly earthbound.

It seemed that last Friday’s concert from the BBC Symphony Orchestra had suffered from the Gergiev-effect. With the current maestro of the London Symphony Orchestra embarking on a complete Mahler cycle it was probably unwise of this orchestra to programme Mahler’s Fourth Symphony as the attendance was sparse, to say the least. And at any rate, whilst the BBCSO excels in certain areas of the repertoire, it simply doesn’t have Mahler coursing through its veins like the LSO does.

That’s as maybe, but the main reason for attending this concert was the presence of the highly-acclaimed Swedish soprano Camilla Tilling, who has been garnering rave reviews for her work in the concert hall and on the operatic stage far and wide throughout Europe. So the chance to hear her in a Zemlinsky rarity and in Mahler’s 4th proved to be too much of an irresistible draw (well for me at least).

The Zemlinsky piece, Waldesprach, is nothing short of a Lilliputian masterpiece. Coming in at just under ten minutes in length, on first hearing it’s a piece that you want to hear all over again, immediately. The text which Zemlinsky sets is by Joseph von Eichendorff, and in translation means Forest Dialogue. In many ways it’s a precursor to Ewartung, as in Zemlinksy’s rich orchestration the piece takes on operatic overtones. Tilling rose to the occasion and produced a flood of gloriously nuanced sound, which easily rode the occasional moments of orchestral tumult. And it was a joy to hear a soprano who actually sings words as though they mean something – her pointing of the German text was a pleasure to hear.

Here too, Jiri Belohlavek seemed inspired, which came as a welcome relief following the rather pedestrian and fussily-conducted performance of Haydn’s Symphony No. 96 Miracle, which opened the concert. Despite being paired down to period orchestra proportions, the BBCSO’s playing was merely ‘correct’ and rather half-hearted. They certainly got their teeth into the Zemlinsky, and there were some truly inspirational moments in the Mahler, but they were few and far between. It was Tilling’s wonderfully pure soprano, and committed performance of Das himmlische Leben (The Heavenly Life) that managed to make the closing movement of the Mahler so luminous. And for her transcendental performance we must be truly grateful.